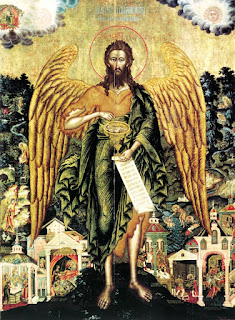 In chapter 11 the theme of wilderness wandering comes to an end and the theme of Israel's rest in the land along with the subsequent rise of their promised King begins. But because I have already commented in an earlier post about how this theme of wilderness wandering begins and ends with Jesus' response to John the Baptist, I will move on to discuss the following statements within chapter 11 which concern the relationship between John and Jesus.

"Behold! I send my messenger before your face, who will prepare your way before you."

Truly, I say to you, among those born of women there has arisen no one greater than John the Baptist. Yet the one who is least in the kingdom of heaven is greater than he. From the days of John the Baptist until now the kingdom of heaven has suffered violence, and the violent take it by force. For all the Prophets and the Law prophesied until John, and if you are willing to accept it, he is Elijah who is to come. He who has ears to hear, let him hear.

When John came baptizing in the wilderness, every Jew around the region of Judea understood that he was a true prophet of Yahweh. His ministry and message was very influential among the Jews. Even Josephus, the Jewish historian and contemporary of Jesus' apostles, comments about the great influence of John the Baptist in his day. Commenting on a war between Aretas, the king of Arabia, and Herod the Tetrarch, and how Aretas’ armies destroyed the forces of Herod, Josephus writes:

Now, some of the Jews thought that the destruction of Herod’s army came from God, and that very justly, as a punishment of what he did against John, that was called the Baptizer; for Herod slew him, who was a good man, and commanded the Jews to exercise virtue, both as to righteousness toward one another, and piety towards God, and so to come to baptism; for that washing would be acceptable to him, if they made use of it…
…Now, when many others came to crowd about him, for they were greatly moved by hearing his words, Herod, who feared lest the great influence John had over the people might put it in to his power and inclination to raise a rebellion, (for they seemed ready to do anything he should advise,) thought it best, by putting him to death, to prevent any mischief he might cause, and not bring himself in to difficulties, by sparing a man who might make him repent of it when it should be too late. Accordingly he was sent a prisoner, out of Herod’s suspicious temper, to Macherus, the castle I before mentioned, and was there put to death. Now the Jews had an opinion that the destruction of this army was sent as a punishment upon Herod, and a mark of God’s displeasure against him.1

When Jesus asks rhetorically, "What did you go out to see?", he knows that many among the crowds who are following him once followed John "the Baptizer" also. Jesus also knows that they didn't go out into the wilderness to see something ordinary and weak, like a reed shaken by the wind; nor did they go out to see an ordinary ruler dressed in expensive "soft" fabrics. They went out into the wilderness to see something unique and rare in first century Israel. They went out to see a prophet of the Lord. But Jesus reminds those who have ears to hear that John was much more than a prophet. He was an angel. And as an angel, John was commissioned to prepare the way for the great procession of Israel's King. John was he of whom it is written,

"Behold! I send my messenger before your face, who will prepare your way before you."

This "messenger" is angelos in Greek. It's the word from which we translate the word "angel" in English. Angel means messenger though. Sometimes it refers to an angelic creature, but most often in the Scriptures the word simply refers to a messenger. Even the word "gospel" is derived from this word, meaning the "good message" or "good news" (evangellion in Greek). In this case, John is the "messenger" referred to in Malachai 3 and the destined-one whom Jesus confirmed as "Elijah to come." Malachai 3:1-5 says,


Behold, I send my messenger, and he will prepare the way before me. And the Lord whom you seek will suddenly come to his temple; and the messenger of the covenant in whom you delight, behold, he is coming, says the Lord of hosts.  But who can endure the day of his coming, and who can stand when he appears?

According to Malachi's own prophesy to Israel, Yahweh promises a "messenger" who would prepare the way for Him (Yahweh). And then, immediately after this, we find out that the Lord, whom the people of Israel are seeking, is promised to "suddenly come to his temple" after this messenger arrives. The Lord who comes to his temple is then given a descriptive title. The Lord is described as "the messenger of the covenant in whom you (the people of Israel) delight." This, according to Jesus' own enigmatic words, is the direction in which Jesus was aiming his rhetorical questions about John. Jesus knows that among his own crowd there are many Israelites who once followed John. And those who stopped following John and started following Jesus are doing so for a very good reason. They know John was a prophet of the Lord. But Jesus declares that he is actually more than a prophet. He is the messenger of almighty God who would prepare Israel to meet their Lord, the messenger of the covenant.

Jesus confirmed this when he said, "For all the Prophets and the Law prophesied until John, and if you are willing to accept it, he is Elijah who is to come. He who has ears to hear, let him hear."

This reference to Elijah also comes from Malachi. Malachai 4:1-6 says:

For behold, the day is coming, burning like an oven, when all the arrogant and all evildoers will be stubble. The day that is coming shall set them ablaze, says the Lord of hosts, so that it will leave them neither root nor branch.  But for you who fear my name, the sun of righteousness shall rise with healing in its wings. You shall go out leaping like calves from the stall.  And you shall tread down the wicked, for they will be ashes under the soles of your feet, on the day when I act, says the Lord of hosts …Behold, I will send you Elijah the prophet before the great and awesome day of the Lord comes.  And he will turn the hearts of fathers to their children and the hearts of children to their fathers, lest I come and strike the land with a decree of utter destruction.

What we learn from Malachi's prophecy is that a Prophet like Elijah (i.e. John the baptizer) would be sent by Yahweh to “turn the hearts” of Israel (i.e. call them to repentance) before “the awesome day of the Lord comes…[to] strike the land with a decree of utter destruction.” And the Lord himself is that angel of the covenant who “will suddenly come to his temple” and “strike the land with a decree of utter destruction.” This is consistent with the themes of soon-coming judgment upon the land of Israel and its temple which we have already learned from Jesus elsewhere in Matthew's gospel (here, here, here, here, here, and here). John was a messenger of God's good news for the people of Israel. He was a messenger sent from God to turn the hearts of Israel back to Yahweh, away from Herod's idolatrous temple, it's illegitimate priesthood, and it's Christless Judaism, and towards the face of Jesus Christ. This is what Jesus meant when he said, "Among those born of women there has arisen no one greater than John the Baptist. Yet the one who is least in the kingdom of heaven is greater than he."

Jesus did not mean that Christians in the 21st century would be greater prophets than John. Nor did he mean to infer that no human being in history  had greater dignity than John the Baptist. Some scholars have suggested instead that Jesus was referring to John's spiritual understanding, and that those who are least in the kingdom of heaven were promised to have greater spiritual intimacy with Christ through the pentecostal outpouring of the Spirit, which John never experienced because of his death prior to that event. But I think that's an embarrassing exegesis of the text itself because that's not even remotely alluded to in the text itself.

Jesus says explicitly that John is the messenger whom Yahweh had prepared for the revelation of the Lord and his coming in judgment upon the idolatrous land of Israel. And so, when Jesus said that "the one who is least in the kingdom of heaven is greater than he," he was referring to those Jewish disciples in his day who were following him and heralding his good news. They would be greater than John the Baptist. They would be greater messengers than John before the Lord suddenly comes to his temple, striking the land with a decree of utter destruction. Their message would have a greater impact upon the people of Israel than John the Baptist.

We now know, as a matter of historical fact and consistent biblical exegesis, that Jesus did come in 70 A.D. to judge Israel, end the old covenant age, and restore the godly people of Israel as he promised; and all those faithful, spirit-filled Jews who followed their Messiah, Jesus, were much greater messengers of the gospel than John ever could have achieved in his lifetime. He who has ears to hear, let him hear.