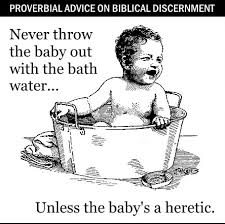 Vaughn Ohlman, the "practical theonomist" and reformed baptist who has written a couple self-published books which are popular among the formalistic, baptistic crowd of "reformed" Christianity, says that he holds to "the Grammatico-historical method of interpretation," and that he believes "every text of Scripture must be interpreted with an understanding of both the language that was used, and the context/culture/historical setting in which it was given."1 Immediately following that assertion, he declares that:

All Scriptures are sufficiently plain that there are no facts of history or linguistics which are so obscure, or lost in time, that Christians living today, with revelation of the Spirit and diligent searching of all of Scripture, cannot understand what God would say to them through that text.2

But here is where it gets interesting. He then goes out of his way to make clear that he rejects the "redemptive historical" interpretation of Scripture insofar as it rejects, as a methodology, examples within the historical narratives of Scripture to be considered normative for applying Christian ethics  today. This is what he must strictly adhere to in order for his books on "biblical" marriage (here and here) which reject dating and courting altogether, as well as his requirement of "headcoverings" for women (here) and absolute patriarchal authority (here) to seem convincing among "biblically" sensitive Christians today. Ohlman says he finds that aspect of redemptive-historical method which does not presume upon all historical examples of Scripture as being normative for Christians ethics,

...to contradict our understanding of the issues raised in II Tim 3:16-17, the linguistic nature of many of the texts themselves, the way these texts are treated in the NT, and the way most commentators and preachers have treated those texts and examples throughout history.3

Ummm... the redemptive historical method contradicts the "linguistic nature of the texts themselves"? Is he serious? Can he be so narrow minded as to miss what is obvious from the text of Scripture itself? When a christian chooses not to presume that the various examples of behavior found throughout the historical narratives of Scripture are normative for Christian ethics in every generation, that is not at all the same thing as denying the plenary inspiration of the Scriptures (II Tim 3:16-17), nor does that lack of presumption inhibit the Scriptures in their entirety from being "profitable for teaching, for reproof, for correction, and for training in righteousness" (II Tim 3:16). Ohlman is not simply mistaken in this regard. He is wrong as well.

Secondarily, the way in which these "texts are treated" by the New Testament  authors affirms and confirms the solid foundation of redemptive historical interpretation, and that the historical narratives per se cannot be interpreted as standing laws which are normative for Christians ethics in all generations, but must be interpreted in light of their own redemptive-historical context. For example, God clothed Adam and Eve with animal skins in the garden. And in Deuteronomy 22:11-12, God says, "You shall not wear cloth of wool and linen mixed together." Should we therefore disregard the narrative of redemption or the historical context of those passages and conclude that Christians ought to clothe themselves with animal skins only, and to avoid wearing clothing which use plant fibers (as linen does, as apposed to wool which is made of animal hair). Should we also conclude that it is immoral for Christians to wear clothing made of synthetic fibers? After all, God clearly clothed Adam and Eve with animal skins, not polyester.

Consider another example. The Law of God says: "You shall make yourself tassels on the four corners of the garment with which you cover yourself." Later on the New Covenant we find Jesus wearing tassels on his garments (Matt. 9:20; 14:36; Mark 5:25; Luke 8:43, 44). Should we therefore conclude that all Christians at all times wear tassels on their garments too? Vaughn Ohlman's hermeneutic necessarily accepts these historical examples as normative for Christian ethics today. But don't misunderstand my main point: Vaughn Ohlman may not accept it himself. How can that be? Well, that can only be if his hermeneutic is arbitrary at this point. And if it's arbitrary, it's inconsistent too.

Last of all, Ohlman asserts that his interpretation is "the way most commentators and preachers have treated those texts and examples throughout history." That is simply not true. But even more embarrassing is the fact that he doesn't mention any commentators or preachers, let alone "most" of them, who support this narrow-minded claim of his. All one would have to do is take a cursory glance through the Nicene and Ante-Nicene church fathers, and the popular protestant reformers like Calvin, Luther, Bullinger, Zwingle, Knox, Baxter, Bunyan, Henderson, Rutherford, Owen, Turretin, etc.. in order to realize how bogus this claim of Ohlman's is. Such claims of his are a mask to cover up his bogus scholarship. "Most" commentators and "preachers" throughout history did not treat the various and widespread historical narratives of Scripture as standing examples of law which are normative for Christian ethics at all times. Ohlman needs to step down from his hermeneutical high horse to see what reality is like.

Sadly, Ohlman recommends Greg Bahsnen's books on theonomy ("By This Standard," "Theonomy In Christian Ethics," and "No Other Standard") on his blog. I say sadly because Dr. Greg Bahnsen spends an exhaustive amount of time demonstrating that this aspect of redemptive-historical hermeneutics, which Ohlman rejects, is fundamental to a consistent theonomic interpretation of Christian ethics contained within the Bible, and that Ohlman's rejection of such historic principles are an embarrassment to the "theonomic" community.