Can’t you see the problem?
If you teach contrary to Science
Entire generations will devolve
Civilization as we know it will regress
Must we return to the middle-ages?

Your beliefs are the real threat
If the foundations of facts are destroyed
What can the righteous do?
You can’t possibly remain so illogical
In light of all the progress we’ve made

Posted by Epexegesis at 7:45 PM No comments:
Email ThisBlogThis!Share to TwitterShare to FacebookShare to Pinterest
Labels: Epexegesis, Poetria

Origen on 'the patience of God' 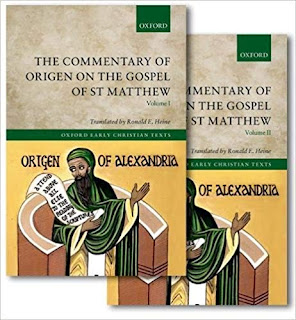 Continuing, as my busy life permits, in a research project that I started many years ago, I stumbled across some fascinating comments by Origen of Alexandria about the so-called 'Olivet Discourse'. Commenting on Matthew chapter twenty-three, he offers a number of striking comments with regard to Jesus' prophecies about the future. Most noteworthy, however, is that many of his comments are not about our future (that is, not prophecies to be fulfilled in our future), but rather about the first century Judaean context and its fulfillment in that generation, which he calls the "literal" sense. This comports well with much of my other research on this topic. And so, without further ado, here is what Origen wanted to tell the Christian world of his day about Matthew chapter twenty-three:

'Woe to you scribes and Pharisees, hypocrites, because you build the sepulchers of the prophets and adorn the monuments of the righteous and you say that if we had lived in the days of our fathers we would not be there allies in the blood of the prophets. Therefore, you bear witness against yourselves that you are the sons of those who killed the prophets. Fill up then the measure of your fathers. You serpents, generation of vipers, how will you escape from the judgment of Gehenna? Behold, therefore, I am sending you prophets, wise men, and scribes; some of them you will kill and crucify, and some of them you will scourge in your synagogues and will persecute from city to city, that all the righteous blood might come upon you that has been shed on the earth from the blood of the righteous Abel to the blood of Zachariah the son of Barachiah whom you killed between the temple and the altar. Truly I say to you that all these things will come upon this generation.'
...The blood of Christ did not satisfy them, but they further killed and crucified those 'prophets' or 'scribes' who had been sent by Christ, and scourged them in their 'synagogues', and persecuted them 'from city to city'. It was just that for all the murderous things they committed they suffer the destruction of Jerusalem and the captivity of the people, since the patience of God no longer tolerates the magnitude and multitude of their crimes.1

It must be said further on this text that the 'generation' of sinners was not punished as soon as the sin had been committed, but when a subsequent 'generation' needing to atone for the sin of its fathers against itself added, in addition, worse sins to the sins of their fathers; and so, if many generations should sin against some nation or city, the nation is punished or the city is destroyed. So then, the Jewish nation, although inflicting many evils on the prophets, was not to be punished immediately when the homicide against the prophets began but later, in the patience of God, when they added the blood of Christ over and above that of the prophets, and filled up the 'measure' of their 'fathers', then they were punished more deservingly. It was not, therefore, the sin that Cain committed when he killed his brother, or the sin of those who killed 'the prophets' which 'this generation' of Jews who lived in the time of Christ took up. It was necessary, rather, that the patience of God which was with the nation of the Jews be completed to its capacities, so that after many outpourings of the blood of the prophets and just men, Jerusalem and Judaea not having been abandoned previously, suffered this later with the blood of Christ, since God was acting magnanimously so that the 'scribes and Pharisees', with the people in agreement, might take upon themselves the blood of the prophets of Christ and, according to the Gospel, that of his wise men and scribes, whom they killed and crucified and scourged 'in their synagogues' and persecuted 'from city to city'. Consequently, when all had been cast out of Judaea, the place was desolate, emptied of all the saints, and it suffered whatever they suffered from Vespasian and Titus.2


Commenting on Jesus' questions in the beginning of Matthew chapter twenty-four (which, as I also pointed out in my series about the Olivet discourse, many Church Fathers interpreted with first century fulfillment), Origen continues:


'And Jesus went out of the temple and departed; and his disciples came to him to show him the buildings of the temple. But Jesus answered and said to them:  Do you see all these things? Truly I say to you, a stone will not be left here on a stone which is not destroyed.'

After Christ had predicted everything that was to come on Jerusalem...
...Since Christ prophesied above of its future destruction and thus threatened its desertion in the words, 'Behold now your house is left to you deserted,' when the disciples hear this they are amazed that such a great 'building of the temple' should be reduced to nothing. ...They want, of course, to persuade him to show mercy on that place, and not do what he had threatened to do.3

But now let us explain the text of the Gospel. We said that the 'abomination of desolation' standing 'in the holy place' is the prince who surrounded Jerusalem with an army. And so, because such terrible things happened to those who were in Judea at that time, therefore the Lord, prophesying these future events, says to the people, 'Let those who are in Judea at that time flee to the mountains.' And the things that happened at that time were so bad that we say that the person who was 'on the roof of the house' would not have had time to descend and 'take anything from his house', and the one 'who was in the field' would not have been able to return to the city and 'take his garment.' And there was no time then for mercy, not even for the pregnant, nursing mothers, or their infants. Therefore, he says (I mean so far as the literal sense goes): 'Woe to those who are pregnant and to those who are nursing in those days'. And as if speaking to Jews who thought it not lawful on the Sabbath to be active or walk more than a Sabbath day's journey, he says: 'And pray that your flight not occur in winter or on the Sabbath,' for it was extremely difficult to seek safety by flight not only on 'the Sabbath,' but also in 'winter'.

And it is related by those who have written a Jewish history about the things that happened at that time, that the people suffered a 'great tribulation such as had never occurred from the beginning of the world up to the time of Christ. But it was not possible that such terrible things as happened to them occur later, because they had dared to lay hands on the true Christ of God whose mystery and name David venerated and said of Saul when he was persecuting and wanting to kill him, 'I will not lift my hands against the Christ of the Lord.' But we understand the future cutting off of those days to be the shortening of those days 'because of the elect' of God who believe in Christ. And at that time when the people were experiencing great calamities and the elect in Judaea were suffering dangers, many deceivers were saying: 'Behold, here is the Christ; behold there.' Jesus, teaching his disciples to watch out for such people, said, 'If at that time someone shall say to you, behold here is the Christ; behold there, do not believe them; for false Christs and false prophets will arise and perform great sigs and portents.' And someone can mention Simon Magus who used to claim to be the great power of God, or anyone like him, who wanted 'to deceive, if possible, the elect.'
We have spoken of these matters in anticipation, not adding in this place any exposition beyond that which is according to the letter for the sake of those who are pleased with the simple narrative in order to speak of those things that seem to be useful for them, because the Lord set forth these future events prophesying as a diviner of the truth.4