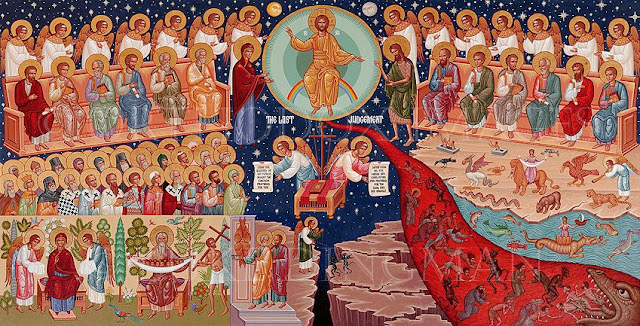 This is the final installation of a post long overdue. Life has been extremely busy over the last year, yet I did not forget about closing out this five-part series on the Olivet Discourse.

In this post I'm going to continue where I left off, which was my promise to show the literary relationship between the last section of the Sermon on the Mount (Matt 25:31-46) with the first section of that same Sermon (Matt 23:1-12).

As I also presented in the first post of this five-part series, Matthew's Sermon on the Mount is structured in a six-part chiasm as follows:

A’)  The Son of Man seated on his own throne: doing what they did not do

This chiastic literary structure shows that there is a relationship between sections A and A', B and B', C and C', focusing heavily on a central sections (sections C and C') but yet moving forward in an A-B-C-C'-B'-A' trajectory, ending with words, phrases, and concepts that mirror how the Sermon began.

With that in mind, let's dive into the first Section (Section A above), which begins the entire Sermon as follows:

Then Jesus said to the crowds and to his disciples, “The scribes and the Pharisees sit on Moses’ seat, so do and observe whatever they tell you, but not the works they do.


For they preach, but do not practice. They tie up heavy burdens, hard to bear, and lay them on people’s shoulders, but they themselves are not willing to move them with their finger. They do all their deeds to be seen by others. For they make their phylacteries broad and their fringes long, and they love the place of honor at feasts and the best seats in the synagogues and greetings in the marketplaces and being called rabbi by others.
But you are not to be called rabbi, for you have one teacher, and you are all brothers. And call no man your father on earth, for you have one Father, who is in heaven. Neither be called instructors, for you have one instructor, the Christ. The greatest among you shall be your servant. Whoever exalts himself will be humbled, and whoever humbles himself will be exalted." (Matt 23:1-12)

Matthew records Jesus' Sermon on the Mount with a direct address to "the crowds and to his disciples" about another influential group of Jewish authorities they were all familiar with, "the scribes and Pharisees."  Nothing could be more clear from the outset that Matthew records a contrast between two groups of disciples-->(1) disciples and observers of Jesus and (2) disciples and observers of respected first century Jewish authorities. In other words, Jesus is shown directing his whole Sermon with a distinction between a group addressed as "you" and a group addressed as "them", and the main difference between the two groups is whom they would choose to listen to, and trust, and follow. Would it be Jesus and his disciples, or the already-established Jewish authorities? According to Jesus, "whoever" had decided to exalt himself would ultimately be humbled, and "whoever" committed to humbling himself ended up being exalted.

So, again, the contrast is very clear: people in first century Judea had a choice to make when listening to Jesus' Sermon on the Mount. Whoever followed Jesus and his disciples would be exalted, whereas those who followed the Scribes and Pharisees (who would later indulge in slandering and crucifying Jesus, and also persecute his disciples) would be humbled.

Interestingly, Matthew begins this discourse with a unique description of the Scribes and Pharisees, worthy of remembrance. He says "they" are the ones who "sit in Moses' seat". Here, again, it is noteworthy to point out that this action of "sitting" is what begins the Sermon. It is also what Matthew highlights from the teachings of Jesus to end the Sermon. Surely that cannot be a mere coincidence if this is a thoughtful piece of literature, which it clearly is!

Now let's dive into section A', the last section of the Sermon in Matthew's Gospel, and look at the way in which Matthew draws together these images from the beginning of the Sermon. Pay special attention to how this section begins with Jesus "sitting" on a throne in the heavens (not Moses' seat on earth, among Jewish authorities), and the repeated contrast that is highlighted between two groups of disciples---> one flock (goats) on the left side, and one flock (sheep) on the right side of Jesus.

This closing section of the Sermon (Matthew 25:31-46) reads as follows:

And when the Son of Man comes in his glory, and all the angels with him, then he will sit on his glorious throne, and they—all the nations—will be gathered before him, and he will separate them one from another as a shepherd separates the sheep from the goats, and he will place the sheep on his right, but the goats on the left. Then the King will say to those on his right, ‘Come, you who are blessed by my Father, inherit the kingdom prepared for you from the foundation of the world. For I was hungry and you gave me food, I was thirsty and you gave me drink, I was a stranger and you welcomed me, I was naked and you clothed me, I was sick and you visited me, I was in prison and you came to me.’ Then the righteous will answer him, saying, ‘Lord, when did we see you hungry and feed you, or thirsty and give you drink? And when did we see you a stranger and welcome you, or naked and clothe you? And when did we see you sick or in prison and visit you?’ And the King will answer them, ‘Truly, I say to you, as you did it to one of the least of these my brothers, you did it to me.’


Then he will say to those on his left, ‘Depart from me, you cursed, into the eternal fire prepared for the devil and his angels. For I was hungry and you gave me no food, I was thirsty and you gave me no drink, I was a stranger and you did not welcome me, naked and you did not clothe me, sick and in prison and you did not visit me.’ Then they also will answer, saying, ‘Lord, when did we see you hungry or thirsty or a stranger or naked or sick or in prison, and did not minister to you?’ Then he will answer them, saying, ‘Truly, I say to you, as you did not do it to one of the least of these, you did not do it to me.’ And these will go away into eternal punishment, but the righteous into eternal life.”
When Jesus had finished all these sayings, he said to his disciples, “You know that after two days the Passover is coming, and the Son of Man will be delivered up to be crucified.”


Do you see the contrast?

The scribes and Pharisees "sit" in Moses' seat, the conceptual throne of those guarding and administering Moses' Law, whereas Jesus is described as "sitting on his glorious throne". The scribes, Pharisees, and "whoever" else rejected Jesus in preference for those authorities sitting in Moses' seat are the goats on the left side of Jesus. The disciples who humbled themselves before God, following Jesus and his Apostles would be exalted. They were the sheep on the right side of God.

Is this making sense now?

All throughout this five-part series of the Sermon on the Mount I have been showing verse by verse the literary relationship between everything described therein, and at the center of the entire Sermon in a very clear sequence of promises---> promises regarding the signs preceding the end of the Old Covenant, and the signs of the end itself---> promises regarding the signs preceding Christ's coming in judgment upon Jerusalem, and the signs of Christ's coming in judgment itself.

So far, from the beginning of Matthew chapter 23, when this sermon began, there has been absolutely zero indication of two separate historical judgments. All references clearly direct the sustained reader to focus upon the soon-coming events leading up to the (now famous and cataclysmic) destruction of Jerusalem and it's precious Temple in AD70, which was the definitive end of the old covenant administration, the end of Moses' so-called "seat".

A question remains: Is Matthew 25:31-46 also about the events related to AD70? After all, the scene describes Jesus sitting on his throne, which could possibly refer to another time period other than the events surrounding the destruction of Jerusalem.

I think this is still primarily describing the same events, and not some so-called "end of time" scenario. Let me explain some reasons as to why I say that.

First, there is absolutely nothing whatsoever in the text itself which implies, infers, or directly states that it's an "end-of-time" event. Rather, it states (in the text itself) that this enthronement scene takes place when the Son comes in glory, which, as we have seen in this series, can only refer to the event of AD70 when the Old Covenant administration (and those sitting in "Moses' seat" within it) finally vanished away and was made completely obsolete (Hebrews 8:13).

Secondarily, the scenario describes the Son sitting on "his glorious throne", which describes a host of allusions to the absolute reign of Israel's promised Messiah. Unless we presume (erroneously) that this is describing an event in our future, at the so-called "end of the world" or "end of time", there is no reason to view this scenario as anything other than the definitive reign of Christ over all the earth, which began in the first century and was demonstrated definitively as promised in the end of the Old Covenant in AD70.

Third of all, it is well within the boundaries of biblical symbolism to imagine this scenario of Jesus enthroned as taking place within the heavenly realm, and not on earth at all. A clue given to us is the language about gathering and separating nations before him. Such a description does not need to entail a gathering of all people from the beginning of time to the end of time, let alone at a location on earth. Indeed, in its close historical context, it is far more likely to envision this gathering of all peoples to describe all those in covenant with God who spread throughout the nations within the first century, those faithful and unfaithful witnesses who had died and descended to "the dead ones" in Hades/Sheol, awaiting vindication/judgment from the living and true God of all times and all locations on earth. In other words, this "final judgment" scene is likely describing, in it's first century Messianic context, a gathering of people, faithful and unfaithful, who had died prior to and during AD70 while the reign of the Old Covenant administration was still in place.

Yes, I said that correctly. There is no reason to describe this gathering and separating as a description of a singular, "final judgment" of all people at the end of all time. Rather, in context, it is exponentially more likely to be describing the time of the promised end in which the New Covenant would be administered throughout the world without hindrance by those insisting upon life under the Old Covenant administration.

As I have noted throughout my exposition of Matthew's Gospel,  Jesus was very clear about "the end" taking place in that generation. The harvest where reaping and gathering takes place is in "the end of the age," the same "end" described throughout this Sermon on the Mount and elsewhere (e.g. I Cor 10:11; Heb 9:26).