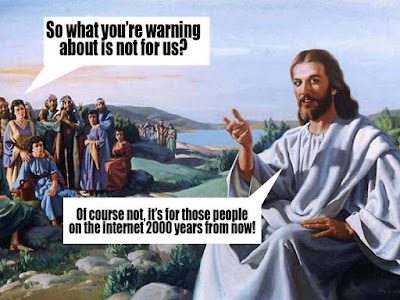 In many posts written over the past five years I have consistently shown how the broad, "macro" literary structure of Matthew's Gospel (here, here, and here) illumines and weaves together the seemingly disjointed narrative composition of individual pericopes within the book. And as can be seen elsewhere in numerous places of this blog, I have walked readers through over half of the Gospel's "micro" structures as well. In the following series of posts I am going to work through one of the two most controversial micro structures of the whole Gospel: the so-called "Olivet Discourse."

There are a few hundred differing theories among Christians and non-Christians alike about how to interpret the Olivet Discourse. So then, right from the outset I'm going to simply say that my conclusions will not be unique among them all, but my literary approach to the discourse will be a minority position among them all. I also promise that understanding the Olivet Discourse is very, very simple; so simple in fact that apart from tribalistic preconceptions which leave us feeling uncomfortable as "outsiders" when veering into unfamiliar territory labeled as "off limits" by other members in our tribe, what I'm going to present should convince you. I don't pretend that the evidence for understanding the Olivet discourse is ambiguous at all. I think it's message is consistent and crystal clear. Only the "off limits" warnings posted by surrounding tribalists can (and do) scare interested students of the Scriptures into cognitive dissonance. If you care about Matthew's Gospel as literature with any literary or historical integrity (as myself and most Christians do), you should find this series interesting and challenging. If you have dabbled in studies about "eschatology," or even the absurdities surrounding so-called "end times prophecy" for today (which I consider to be complete lunacy, by the way), you should find this series interesting and challenging. But if you're an armchair theologian or confessional calvinist who spends his (or her) free time trolling social media to find the next heretic to post signs around, please don't bother reading further.

There are a few things worth noting and discussing at this point before we dive into the really controversial (and incontrovertible) passages. First of all, notice that sections "A" and "A' " are relatively short, covering less than 16 verses for each section. Compositionally, then, each matching structure is of comparable size. As I will be arguing in a later post (in this series), there is also an explicit theme between them, the theme of "sitting" on a throne in God's temple. The enthroned Jesus sitting within the heavenly temple of section A-prime is closely connected with Jesus' opening warnings about the Scribes and Pharisees who "sit on Moses' seat" within Herod's temple.

Secondarily, notice that sections "B" and "B' " each contain eight subsections, and that I have inserted an asterisk ("*") next to verse 14. That asterisk is there to catch your attention. I insert it there because many modern translations of the Bible remove verse 14 on the alleged grounds that (1) it is an interpolation derived from Mark 12:40 or Luke 20:47, (2) a handful of very old (and poorly preserved!) manuscripts omit the verse altogether, and (3) a pathetic minority of manuscripts include verse 14 but insert it before and after verse 13, thereby leaving its authenticity in doubt because of its so-called spurious placement within the narrative.

I don't buy that. I think the verse is genuine. I can easily defend the textual credibility of the verse in question, as I have done with other, much more controversial and complicated verses. But now is not the time for sorting through textual criticism. It is sufficient to notice that I include the verse as legitimate on textual and literarily critical grounds. As such, I believe section "B" (23:13-39) completes a rhythm of eight "woes" total, which can be divided into two halves, with the first three "woes" of each half followed immediately by a much longer and detailed fourth "woe" that explicitly links the Scribes and Pharisees with those who mock the God who sits enthroned in His temple and those who persecute and murder God's servants. The breakdown of these eight subsections are as follows:

1)  But woe to you, scribes and Pharisees, hypocrites! For you shut the kingdom of heaven in people’s faces. For you neither enter yourselves nor allow those who would enter to go in.


2) *[Woe unto you, scribes and Pharisees, hypocrites! For you devour the houses of widows and for a pretense make long prayers. Therefore you shall receive the greater damnation.]*


3)  Woe to you, scribes and Pharisees, hypocrites! For you travel across sea and land to make a single proselyte, and when he becomes a proselyte, you make him twice as much a child of hell as yourselves.

5)  Woe to you, scribes and Pharisees, hypocrites! For you tithe mint and dill and cumin, and have neglected the weightier matters of the law: justice and mercy and faithfulness. These you ought to have done, without neglecting the others. You blind guides, straining out a gnat and swallowing a camel!


8)  Woe to you, scribes and Pharisees, hypocrites! For you build the tombs of the prophets and decorate the monuments of the righteous, saying, ‘If we had lived in the days of our fathers, we would not have taken part with them in shedding the blood of the prophets.’ Thus you witness against yourselves that you are sons of those who murdered the prophets. Fill up, then, the measure of your fathers. You serpents, you brood of vipers, how are you to escape being sentenced to hell? Therefore I send you prophets and wise men and scribes, some of whom you will kill and crucify, and some you will flog in your synagogues and persecute from town to town, so that on you may come all the righteous blood shed on the land, from the blood of righteous Abel to the blood of Zechariah the son of Barachiah, whom you murdered between the sanctuary and the altar. Truly, I say to you, all these things will come upon this generation. O Jerusalem! Jerusalem, the city that kills the prophets and stones those who are sent to it! How often I have gathered your children together as a hen gathers her brood under her wings, and you were not willing! See, your house is left to you desolate! For I tell you, you will not see me again, until you say, 'Blessed is he who comes in the name of the Lord.'

Most importantly, however, is the way the eighth woe ends (in verses 36-38): "Truly I say to you, all these things will come upon this generation. O Jerusalem! Jerusalem, the city that kills the prophets and stones those who are sent to it! How often I have gathered your children together as a hen gathers her brood under her wings, and you were not willing! See, your house is left to you desolate!"

Virtually every scholar in history has readily acknowledged that the phrase "this generation" of verse 36 meant that particular generation in which Jesus and his disciples were living, which was the generation that lived to see or hear about the Jewish wars and the destruction of Jerusalem with Israel's Temple in it (i.e. their "house" left desolate). In fact, I'm not aware of any commentator of the Olivet Discourse (and I have personally read over two hundred commentaries and/or scholarly essays on the Olivet Discourse) who said the phrase "this generation" in verse 36 meant anything other than that generation in which the Jewish wars and the destruction of Jerusalem ensued. This is very important to note down and remember because the next time that same phrase appears within this discourse it appears in it's corresponding section, section B'. In chapter 24, verse 34 (of section B') we see Jesus repeating himself:

"Truly, I say to you, this generation will not pass away until these things take place."

I realize there are myriads of clever ways to interpret 24:34 as meaning something other than an explicit first century Jewish context. But they're all pathetic and silly. Yes, I said pathetic and silly. All such attempts to dodge or deflect attention away from this crystal clear meaning is miserably inadequate in it's ability to uphold the literary and historical integrity of Matthew's Gospel.

Enough invectives. Time to move on.

Next we approach sections C and C', which will be covered in the following series of posts. In future posts I will also walk us through all eight controversial subsections of B' (24:4-25:30), along with what many Church fathers have said about those sections (a sample of which can be found here), which will act as a guide to understanding the simplicity of the Olivet Discourse, but in a way that I suspect will be alarming and challenging to many Christian tribes.

And finally, at the very end of this series I will walk us through sections A and A' in more detail, because at that point it should be very clear how they form an inclusio around the discourse, which unifies the entire discourse, not veering off topic in the slightest.