The Importance of Red Letters

In a previous post, the narrative of Jesus' young life in Matthew's gospel (chs. 1-4) was closely paralleled with the life of Israel, beginning with the birth of Israel and continuing with an exodus out of Egypt all the way up to Mount Sinai where Moses ascended to receive God's Law (cf. Beginning, Birth, & Exodus; Sept. 2012). As F. F. Bruce has noted in his book, The New Testament Documents: Are They Reliable?,


[Matthew] the evangelist is ...at pains to show how the story of Jesus represents the fulfillment of the Old Testament Scriptures ...that the experiences of Jesus recapitulate the experiences of the people of Israel in Old Testament times. Thus, just as the children of Israel went down into Egypt in their national infancy and came out of it at the Exodus, so Jesus in His infancy must also go down to Egypt and come out of it, that the words spoken of them in Hosea 11:1 might be fulfilled in His experience, too: 'Out of Egypt have I called my son' (Mt. 2:15).1

But these are only a few brush-strokes of the entire gospel-landscape which Matthew painted for his Palestinian-Jewish audience. 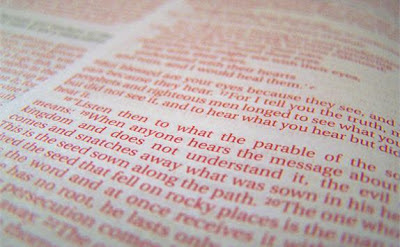 As Matthew's narrative continues in chapter five, a new and unique sort of texture is added: we find Jesus teaching for the first time and He is teaching for a very long time! In fact, if one were to flip through a red-letter bible a few times, it's very noticeable that once Jesus ascends the Mount in chapter five, a very lengthy discourse begins, leaving page after page with only red-lettering, and it doesn't end for a few chapters when Jesus descends the Mount (at the end of chapter 7).

As Peter Leithart has noted in his book The Four: A Survey of the Gospels,

The first discourse, the Sermon on the Mount, is clearly modeled on the revelation at Sinai. Jesus is on a mountain, after having passed through the Jordan and spent forty days in the wilderness. From the mountain, He quotes from the law, and teaches His disciples that they must produce a righteousness that surpasses that of the scribes and Pharisees. He is Moses on the mountain, or Yahweh delivering the law to His people.2

But if the first discourse, the Sermon on the Mount, is intentionally modeled after the revelation at Sinai where Yahweh delivered His law to His people, what portions of Israel's history are the remaining four discourses modeled after?

Posted by Epexegesis at 8:48 AM
Email ThisBlogThis!Share to TwitterShare to FacebookShare to Pinterest
Labels: Biblical Interpretation, Matthew