None has clean hands 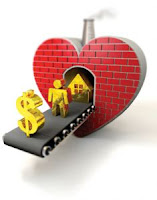 As I was researching some commentaries regarding Jesus' Sermon on the Mount and the subject of mammon (an Aramaic word which Jesus used to describe material possessions), I came across some interesting comments by Herbert Schlossberg. In his book, Idols for Destruction: The Conflict of Christian Faith and American Culture, Schlossberg spends an entire chapter discussing "Idols of Mammon", and I thought his insights about its destructive pathologies shed a lot of light upon a number of concerns I have with America's moral decline. He writes:

When Jesus told his disciples they could not serve both God and mammon, the reason he gave was that the two were rival loyalties and that if one were loved the other would be despised (Matt. 6:24). This admonition came in the midst of a portion of the Sermon on the Mount that warned against the preoccupation with wealth and material possessions...  Instead, the disciples [of Jesus] were to seek the kingdom of God first... The mammon described here as the rival of God, therefore, is the idolatrous elevation of money and the material possessions it will buy...  Like idolatries, it finds ultimate meaning in an aspect of creation rather than in the creator. And like all idolatries it finds outlet in destructive pathologies that wreck human lives.

Those pathologies cannot simply be subsumed under such labels as liberal, conservative, or radical. The ideologies common to American politics all have a share in them; none has clean hands...  If that contention seems odd, it is only because political rhetoric, the media, and the educational establishment have badly distorted the political and economic landscape, making it appear that the only alternatives to liberal idols are conservative idols.

Those whose loyalty is to mammon quite naturally cast anxious eyes on the property belonging to others, and that is why the apostle called covetousness a form of idolatry (Col. 3:5; Eph. 5:5)... It often accompanies envy, which is a discontent at or resentment of another's good fortune. Envy precedes covetousness and is itself the object of sever biblical censure. The chief priests demanded that Jesus be condemned because they were envious of him (Mark 15:10). In the long list of wicked acts by which Paul described the conduct of the reprobate, envy comes directly before murder (Rom. 1:29)...

On the other hand envy may act in a more straightforward, less devious, way by simply striving to take what it desires from those it envies. In most cases, this action is associated with the idolatry of mammon, and it accomplishes its end by practicing one of many forms of theft. That is why the command "You shall not steal" (Ex. 20:15) is not only an ethical injunction but also a warning against practicing the idolatry of mammon.1


Outright stealing is widely recognized as an expression of idolizing mammon. But aren't there other ways -- less obvious ways -- to accomplish the same thing?

What about political programs which monopolize your capital investment and redistribute to others without your approval or sanction? Is that not legalized theft?

What about the continual debasement of "money" and its purchasing power through inflationary policies? Is that not another direct product of the idolatry of mammon?