In his book Idols for Destruction: The Conflict of Christian Faith and American Culture, Herbert Schlossberg argues that "if humanism is the theological arm of the Religion of Humanity, the ethical arm is humanitarianism"1 (emphasis mine). According to Schlossberg, humanitarianism's praise of the lower class in America has been so enthusiastic that it has effectively produced the "divinization of the poor"2 and a distinctive form of idolatry: resentment. 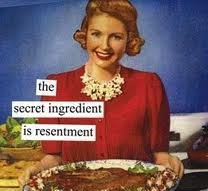 
When Judas criticized the use of expensive ointment to anoint Jesus, it was ostensibly due to his concern for the poor (John 15:5f.).  In general this phenomenon praises the worthiness of what is unsuccessful or debased while expressing contempt for the exceptional and successful. Along with the exaltation of the poor comes the abasement of the middle class... Thus the poor are foils through whom resentment can strike at the successful while hiding its evil intentions under a mask of goodwill. A common humanitarian complaint is that the poor are not sufficiently interested in their own welfare, making it necessary for the humanitarian gospel to be preached among them...

The dual effort to raise the lower classes and debase the higher has long been called "leveling," and in recent years has grown into the movement with the awkward name of equalitarianism (often used in the French form, egalitarianism). Equality in its original meaning in the United States required that immutable privileges of birth and position be uprooted from the new nation. There was no longer to be king or nobility; hereditary offices were abolished, and people were to reach whatever station in life their qualities and their efforts earned for them...

As society erases social distinctions and moves toward a leveling... the demand for equality is not satisfied, but intensified. People do not envy a Rockefeller his millions as much as they envy their neighbor a ten percent differential in income. All inequalities, monetary or otherwise, are more galling to the envious when they are nearby, when the advantage is held by those whom one knows and when it is seen daily. The leveling movement has nothing to do with justice, because its impulse is not to raise those who are down but to topple those who are up; resentment is the motive.3


Is it true that, generally speaking, Americans have divinized the poor in this sense?

And if true, how many Christians have unknowingly imbibed these secular ideals, thereby fueling further resentment?

Posted by Epexegesis at 6:48 AM
Email ThisBlogThis!Share to TwitterShare to FacebookShare to Pinterest
Labels: Ethics, Oikonomika, Them's Fightin Words