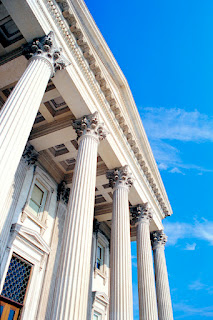 As Peter Leithart has aptly noted, "One of the most obvious things about Matthew is that it includes five large sections of teaching."1  From this there follows what was noted in a previous post (cf. The Importance of Red Letters, Sept. 2012), namely that chapters 5-7 begin the first of those five lengthy sections of teaching in Matthew's Gospel (chs. 5-7, 10, 13, 18, 23-25).

Not only are the five lengthy discourses of Jesus evident simply by flipping through any conveniently colored Bible with the words of Jesus in red, but Matthew appears to have intentionally placed five distinctive phrases within his gospel to distinguish the end of each section. Each of the five discourses end with an identical phrase, "when Jesus had finished" (7:21, 11:1, 13:53, 19:1, 26:1), indicating that Matthew structured his gospel around those five discourses.


This five-fold structure of Matthew's gospel has also been noted by a wide variety of biblical scholars. For instance, F. F. Bruce points out the intentionality of Matthew's main structure in one of his famous books, stating that:


In his famous exposition of Matthew's gospel, D. A. Carson says:

The point is that the five discourses are sufficiently well-defined that it is hard to believe that Matthew did not plan them as such.3

And even though R. T. France finds the "geographical outline of the story" to be "more satisfying" than  discerning Matthew's narrative structure through "verbal division markers",4 he nevertheless admits in his massive commentary on Matthew's gospel that:

Recent discussion has often focused on the search for fomulae which may be taken to mark structural divisions. By far the most prominent is the slightly varying formula which concludes Matthew's five main collections of Jesus' teaching...(7:28; 11:1; 13:53; 19:1; 26:1).5

Likewise, Craig Keener remains skeptical about how to interpret the five-fold structure of Matthew, but he nevertheless points out its plausibility in his socio-rhetorical commentary on Matthew's gospel:

This Gospel [i.e. Matthew] may divide chronologically into three sections; the teaching material divides topically into five. ...Most scholars identify five discourses by the closing formula "when he had finished speaking" in 7:28; 11:1; 13:53; 19:1; 26:1.6

According to Peter Leithart, these five discourses of Jesus are intentionally highlighted by Matthew and "are like five pillars that hold up the book of Matthew"7, set between the Gospel's own opening and closing statements -- statements which mirror the opening "book of Genesis" and closing "Decree of Cyrus".8

Posted by Epexegesis at 7:51 AM
Email ThisBlogThis!Share to TwitterShare to FacebookShare to Pinterest
Labels: Biblical Interpretation, Matthew