Today the holy living ark of the living God,
the one who carried her own Maker within herself,
comes to her rest in the temple of the Lord not made by hands.
David, her intercessor and God's, leaps for joy
the angles join in the dance
the archangels applaud
the virtues give praise
the principalities rejoice with them
the powers exult
the dominations delight
the thrones make festival
the cherubim sing their hymn
and the seraphim glorify God.
They glorify Him in no negligible way, when they give glory to the mother of Glory.

Today the sacred dove,
the pure and innocent soul who was also purified by the Holy Spirit,
has flown from the ark
(I mean from that body which received God and is the source of our life)
and she has found a place of rest for her feet,
flying up to the intelligible world
and pitching her tent in the spotless land of our heritage on high.

Today the Eden of the new Adam welcomes the spiritual paradise
where our condemnation has been cancelled,
where the tree of life is planted,
where our nakedness is clothed again.
For we are no longer naked and exposed,
lacking the radiance of the divine image
and stripped of the abundant favor of the Spirit.
We need no longer tell the story of that tragic, ancient nakedness, saying,
"I have taken off my tunic, and how shall I put it on again?"1
For in this paradise the serpent has no means of entry,
that serpent whose false promise of divinization led us to a covetousness
that made us the equal only of irrational beasts.
The only Son of God,
who is God and of the same substance as the Father,
formed himself into a human being from this virgin,
from this pure soil.
And so I, who am human, am made divine.
I, who am mortal, have now become immortal,
and have stripped off my tunic of skin.
For I have taken off corruption,
and put on the robe of divinity.

Today the immaculate Virgin,
who never involved herself in earthly passions
but was nourished on heavenly thoughts,
did not return to earth.
Being truly a living heaven,
she now dwells in the tents of heaven.
For who could err in calling her heaven,
unless one were to say, and say rightly,
that she has been lifted even above heaven in her incomparable privileges?
For the maker and preserver of heaven
and of everything in and beyond this universe,
the craftsman of all that has been made,
visible and invisible,
He who has no place,
because He is the place of all other beings
(if, indeed, place is defined as what contains the things within it)
He has created a child in her,
of His own power and without human seed,
and has revealed her as the spacious treasure-house of that Divinity that fills all things,
alone and uncircumscribed.
He has gathered Himself up completely in her,
without suffering diminution,
yet He remains wholly beyond her,
abiding in Himself as His incomprehensible home.

Let the heavens rejoice now,
and the angels applaud!
Let the earth be glad now,
and all men and women leap for joy!

Let the air ring out now with happy song,
and let the black night lay aside its gloomy, unbecoming cloak of darkness,
to imitate the bright radiance of day in sparkles of flame!

For the living city of the Lord God of hosts is lifted up,
and kings bring a priceless gift from the temple of the Lord,
the wonder of Zion,
to the Jerusalem on high
who is free and is their mother:
those who were appointed by Christ as rulers of all the earth, the Apostles,
escort to heaven the ever-virgin mother of God!2

1. Canticles 5:3
2. An excerpt from a homily by St John of Damascus, on the Dormition of Mary

Posted by Epexegesis at 5:05 AM No comments:
Email ThisBlogThis!Share to TwitterShare to FacebookShare to Pinterest
Labels: Epexegesis, Typology

Thabor and Hermon Rejoice at Your Name 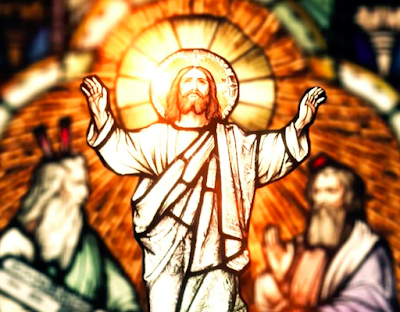 Today things that cannot be heard are heard by human ears; for the visible human being is attested to be Son of God: unique, beloved, of the same substance.

Let David stand as witness, and strike the lyre of the Spirit that speaks God's words.

Let him sing the message now, more clearly and precisely, which the foresaw of old, as from a great distance, with purified eyes: the coming of the Word of God to us in flesh, as something yet to be, when he said, "Thabor and Hermon will shout for joy in your name."1

For this is the name above every name,2 over which Thabor and Hermon rejoice!

This is my Son, the Beloved!3

This is cause of rejoicing for all creation, this is a prize for humanity, a boast that will never be taken away!

For the one to whom this witness is borne is a human being, even if he is not merely this!

O joy, bestowed on us beyond all imagining!

O graces, not given simply in response to modest demands!

O generous giver, who have made a supernatural magnificence your own!

O grace, befitting not so much the receiver as the giver!

O you who grant power and take on weakness!

O you who reveal the human being as eternal, in that the eternal one begins to exist bodily as a creature!

For if the human person is divinized, in that God is humanized, and the one God himself is revealed as also human, then the same individual, being human, is eternal in divinity, yet still, being God, begins to live in his humanity.