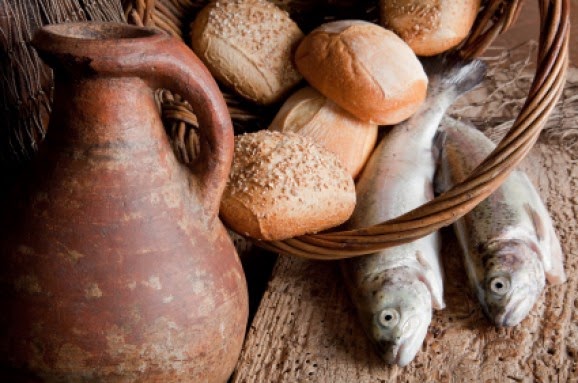 As noted in a previous post, Matthew 13:53—14:13 comprises the first subsection of the distinctive narrative section that extends from 13:53 to 17:27. This subsection is identified as section "A" in that post. (It is really only for mnemonic reasons that the literary structure of this narrative section is often presented as extending from chapter 14 to chapter 17. A closer examination of Matthew’s gospel shows that this narrative section actually begins at the end of chapter 13, specifically verse 53, which notes the end of a lengthy discourse section: “And when Jesus had finished these parables…”.)

In this section Jesus is found visiting his “hometown” for the first time since the beginning of Matthew’s gospel, immediately after his baptism (2:23; 4:13). So far, Matthew has told us nothing about Jesus and his childhood relationship with the people back home in Nazareth, but there is nonetheless much to be gleaned from this encounter in chapter 13.

At this point in Matthew’s Gospel, Jesus is clearly honored enough in his hometown to be teaching his Jewish brethren within “their synagogue.” But by the end of this section Jesus is dishonored, and the reason why is because of his prophetic authority. Matthew illustrates this in various ways.

In 7:28-29, the people were astonished because Jesus was like Moses in his giving of the Law, except Jesus was giving the Law in a way that was greater than the Pharisees, and teaching with more authority than their scribes. However, at the end of chapter 13 the situation that Jesus encounters in Nazareth is different. Instead of simply teaching greater things than their scribes, Jesus is performing “mighty works” (δυνάμεις) which none of their scribes could perform. These “mighty works” were, of course, nothing new to Jesus’ ministry. He had been performing these works all along (11:20-23). Just like Jesus’ earlier report of his ministry to John (11:5-6), the blind were receiving sight, their lame walked, their lepers were cleansed, their deaf heard, and their poor had the gospel preached to them. Yet unlike John’s positive response to this news, the people of Nazareth were astonished because they knew who Jesus’ family was—who his father, mother, and siblings were—but they did not know from what source Jesus’ mighty works had come. Certainly they did not come from his family or even from the teachers of Israel!

Apparently there was too much pressure for Jesus’ “hometown” to accept him as having greater authority than anyone they knew—even their religious authorities—and they were offended (ἐσκανδαλίζοντο) by this. Like Jesus’ parable in the previous chapter, they received Jesus like the “rocky ground” received the seed sown by the Sower. They received Jesus with joy initially, yet because they had no “root” in them, they “fell away” (σκανδαλίζεται; 13:20-21). These aren’t the only instances when Jesus spoke about “falling away” or being “offended” (Greek: σκανδαλίζω). Earlier, Jesus had told the disciples of John that those who are not “offended” or “caused to fall” (σκανδαλισθῇ) by him are, in fact, blessed by him (11:6). So in comparison, this portrait of Jesus’ hometown is clearly not a blessed one. Instead, Matthew’s portrayal of Nazareth is more like a cursed “household” which refuses to honor its own family members who prophecy on behalf of Yahweh (13:57). The fact that Jesus is hated as a prophet in the same way that adulterous Israel hated the prophets of Yahweh—like Elijah, Elisha, and Jeremiah—is significant. It’s also significant that this the first passage within Matthew’s gospel that Jesus explicitly likens himself to a “prophet” (13:57).

Placing this label of “prophet” upon himself also makes perfect sense within the larger context of John the Baptist’s death. After we learn that the people of Jesus’ hometown are caused to fall by Jesus’ “mighty works” (δυνάμεις), Matthew segways onto a brief discussion about Herod hearing rumors about Jesus’ ministry in Nazareth. Apparently Herod heard about these same “miraculous powers” (δυνάμεις) that Jesus had done in Nazareth and elsewhere (14:1-2). But Matthew doesn’t merely tell us about Jesus’ fame reaching Herod; instead he focuses on something which at first glance appears out-of-place and off-topic: he focuses on John the Baptist’s death and it’s relationship with Herod’s wife, Herodias.

At first glance, Matthew’s focus upon Herodias appears to be beside the main point of Jesus’ ministry, but really it highlights Jesus’ place within this gospel, within Matthew's story of Jesus as Israel. Back in chapter 11, when Jesus told the disciples of John about those who are blessed for not stumbling by his “mighty works,” we learned that John was in prison anticipating the coming of the Messiah; but he was still alive then. Here in chapter 14 we hear about John again, but we learn that John has been murdered because Herod’s wife summoned John’s head to be served to her on a platter. Like the Queen’s murderous plot against Elijah for prophesying against her “house,” Herodias wants to destroy John for prophesying against her “house.” But Matthew’s main point is not actually about John or Elijah. It’s still about Jesus, but by recalling John the Baptist’s ministry, Jesus’ ministry is clearly likened unto Elisha’s. It’s only when we find out that Herod thinks Jesus is John the Baptist—as though John was raised from the dead—that we also can see Jesus is to be likened very closely to Elijah and even more importantly, his successor, Elisha. (This typological association is even more explicit by the time we arrive at 16:14.)

Just as the ministry of Elijah foreshadowed the ministry of Elisha, so the ministry of John would foreshadow the ministry of Jesus. Like Elisha, Jesus would carry the prophetic mantle of the prophet before him and perform more “mighty works.” Indeed, throughout the following narrative section (i.e. chapters 14-17), the mighty works of Jesus make far more sense in light of Jesus as a type of Elijah and Elisha. Like Elijah before him, Jesus’ life is in danger from the King and Queen; he then flees to a mountain, then to the wilderness, and then to a widow in the region of Tyre and Sidon, like Elijah. Yet the parallels with Elisha, his successor, are even more striking.

Like Elisha, who is the only explicitly “anointed” prophet of the Old Covenant, Jesus is explicitly called the “Annointed One” by Peter (16:16 c.f. 1 Kings 19:16). Jesus also multiplies loaves of bread for his disciples, which is like Elisha, who was the only prophet in the Old Testament to do that particular miracle! Like Elisha, Jesus crosses the waters connected with the Jordan and is met by a school of disciples who “worship” him (Matt. 14:32; 2 Kings 2:14-15 LXX). When his disciples are tormented by the waves surrounding them, Jesus tells them “do not be afraid,” which is the same thing Elisha tells his disciples when they are tormented by surrounding armies (2 Kings 6:15-17). As the Shunammite woman prostrated herself before Elisha seeking help for her child, so the Canaanite woman prostrates herself before Jesus, and for the same reason (15:25; c.f. 2 Kings 4:27).

In an indirect manner, Jesus is also portrayed as a type of Elisha because of his disciple, Peter.1 Peter is highlighted as a type of chief disciple, similar to Gehazi, Elisha’s chief disciple. Like Gehazi with Elisha, Peter fails to understand his master’s mission, and he foolishly sets himself up as an obstacle between Jesus and other disciples. He is, in fact, the only disciple within the gospels to be singled out as both a chief disciple and a man of “little faith” (14:31). In this light, the resemblance between Peter and Gehazi is unmistakable.

Finally, and perhaps most significantly, Jesus is like Elisha in the way he forms a community of disciples around him. Unlike Elijah, who, like John the Baptist, attracted a lot of attention but not a lot of disciples to follow in his footsteps, Jesus accomplishes the opposite. Jesus attracts most of his disciples in chapters 14-17 of Matthew’s gospel. Like Elisha, Jesus ministers throughout the land of Israel, gathering, nourishing, and sustaining a new community of disciples in a time of great spiritual famine. But his ministry as the greater Elisha has only been alluded to briefly in this first subsection, when Jesus first hears news that Herod thinks he is the resurrected John the Baptist (14:1-3, 13). By his relationship with John's suffering as a prophet, Jesus suffering for the kingdom is foreshadowed, and by his relationship with Elisha's prophetic ministry, the rise of a new and greater Israel is anticipated.

Posted by Epexegesis at 4:56 PM No comments:
Email ThisBlogThis!Share to TwitterShare to FacebookShare to Pinterest
Labels: Epexegesis, I Kings, II Kings, Matthew, Typology

Faith as more than simple belief 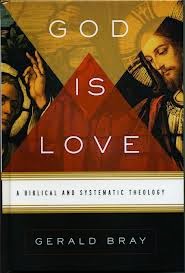 Faith is more than simple belief because it involves commitment of a kind that is possible only between persons. I can believe that the ground beneath my feet is solid enough to build a house on and then construct one on the basis of that belief, but although I might say that I have "faith" in the ground, there is no relationship between us. For example, it would be unreasonable for me to pray to the ground in the hope that it might protect me from earthquakes. The ground does not have a mind or a will that would justify such behavior on my part, and no reciprocal relationship with it is possible. Faith in God, however, involves two-way communication, which means that there is something present both in us and in God that makes such dialogue meaningful. That something is what we call "personhood," and so it is with the personhood of God that our analysis of how we know and experience him must begin.1

Posted by Epexegesis at 5:19 AM No comments:
Email ThisBlogThis!Share to TwitterShare to FacebookShare to Pinterest
Labels: Epexegesis, Ethics, Miscellanea

Posted by Epexegesis at 6:51 PM No comments:
Email ThisBlogThis!Share to TwitterShare to FacebookShare to Pinterest
Labels: Epexegesis, Genesis, Typology 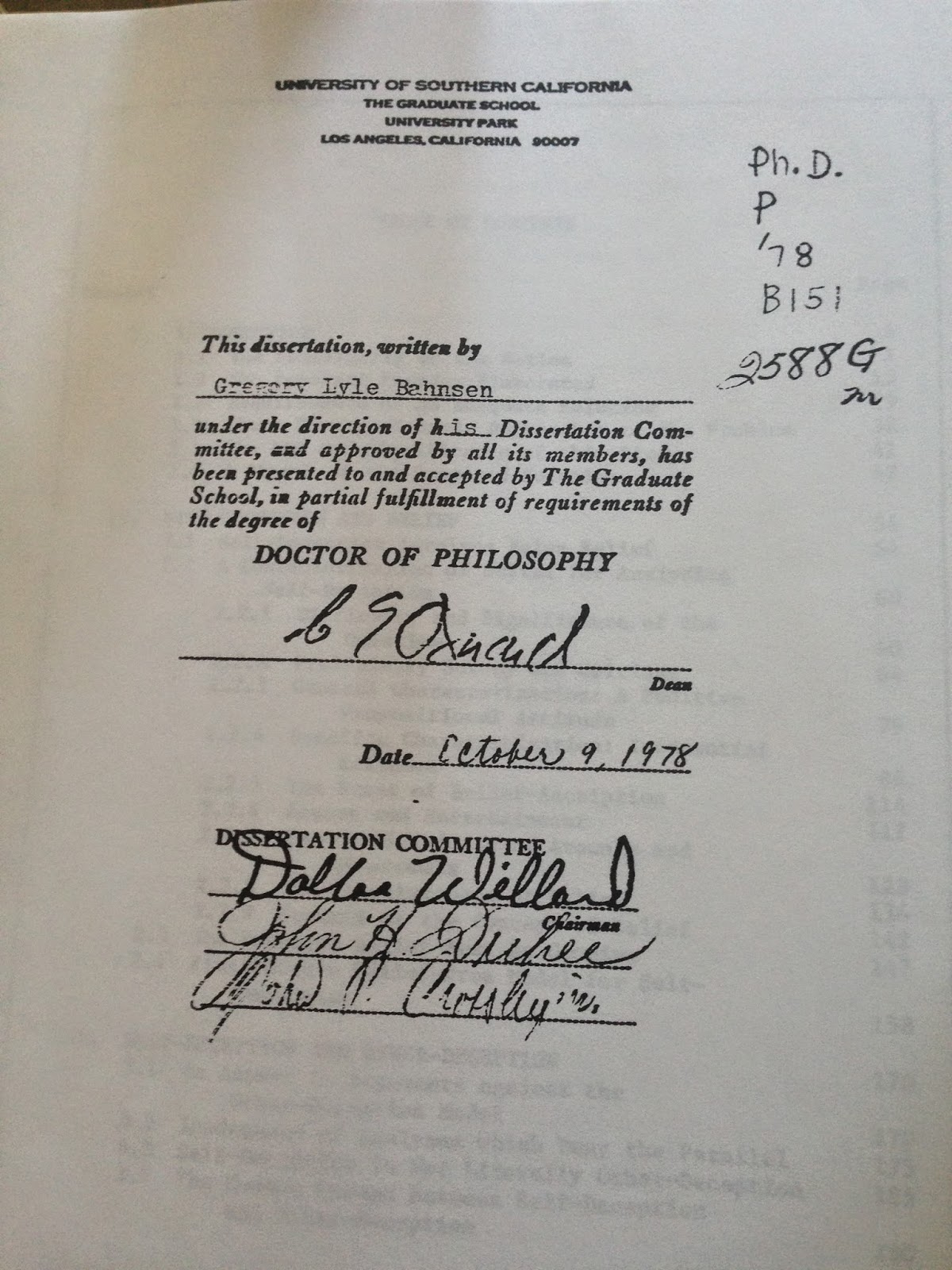 We have maintained that deceived people believe false propositions, and we have elaborated a basic characterization of belief. It will turn out on the analysis being developed here that self-deception actually involves two beliefs which are in conflict. This will be defended in chapter 4. What can be observed here, however, is that the conflict that exists within the self-deceiver can be adequately described as a conflict between two beliefs, and need not be portrayed as a conflict between knowledge and belief. That is, rather than saying that the self-deceiver knows one thing and believes contrary to it, it will be sufficient simply to say that the self-deceiver believes something and yet believes something contrary to it. The contrary belief in either case will be false. However, there is no need to maintain that the other belief to which it is contrary is true and held on good evidence; that is, there is no need to say that it is knowledge (a true belief held on good evidence) to which the false belief is contrary in self-deception. What the self-deceiver takes to be true (i.e., believes) need not actually be true. What is at issue is not whether the self-deceiver holds a false belief in conflict with a true one. It is equally appropriate in self-deception that the conflict be between a false belief and another false belief, for it is the conflict-state that constitutes the condition for self-deception. As long as the self-deceiver actually believes a proposition to be true, it can be objectively false and still serve to set up or generate a conflicting (and similarly false) belief. Our analysis of self-deception need not become complicated, then, with a mixture of knowledge and belief. A person can deceive himself about a belief which he holds whether or not that belief actually has good supporting reasons and turns out to be true or not. Those are extraneous matters here. The important thing is that the self-deceiver believe some proposition and then (falsely) believe something which is incompatible with it.1