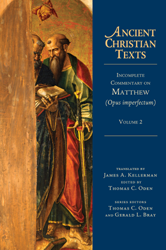 In a fifth century document commonly referred to as Opus imperfectum in Matthaeum, the author makes a number of fascinating remarks concerning Matthew chapter 24. Of particular interest is his repeated reference to Jesus' statements about the destruction of Jerusalem. The author clearly believed that the prophetic statements of Jesus in Matthew 24 involved, in the very least, literal historical fulfillment in the Jewish wars leading up to the destruction of the Temple in 70A.D. But he also imposes a convenient distinction between a "spiritual Jerusalem and a physical Jerusalem," making it possible for many of Jesus' statements to also apply to the "spiritual Jerusalem" (i.e. the Church), which spans the entire course of church history until the final consummation.

The length of his comments are far too lengthy to record in full (spanning more than 20 pages), so I will condense each section accordingly, focusing mainly on his insights concerning the "physical Jerusalem":

But he [Jesus] answered them, "You see all those, do you not? Truly, I say to you, there will not be left here one stone upon another, that will not be thrown down."

If some city rebelled against its earthly king, does he not remove the rights from that city and send his soldiers to make it desolate so that the city that did not recognize the power of its king in good times can know it in bad times and that its very desolation can attest how previously the good graces of the king had benefited it? But this nation rebelled against me, the heavenly king, ruined my law, scorned my commandments, killed my servants, raised their ungodly hands against me and further plots to kill me unless my immortal nature would defend me. So I will remove the pledge of my truth from it, that is, the Holy Spirit. I will remove my army, that is, my holy angels who protected it, so that here a stone will not stand upon another stone. Therefore, when salvation departs from it, perdition must rule it.

As he [Jesus] sat on the Mount of Olives, the disciples came to him privately, saying, "Tell us, when will this be, and what will be the sign of your coming and of the close of the age?"

That is, when will these things be so that stone will not remain on stone, as you say? ...[T]hey ask that first question of their own accord and for their own sake... [for] we never saw the destruction of that temple...

And Jesus answered them, "Take heed that no one leads you astray."

"And you will hear of wars and rumors of wars."

He was saying that at that time there would be rumors of physical battles, which the Roman emperor was preparing against Judea. For just as it is accustomed to happen in the preparation of war while leaders are chosen and an army is gathered and counted, a rumor runs around, especially to those against whom the army is being prepared. But as Josephus explains, after the army entered Judea, it did not immediately turn to Jerusalem but to the individual cities of that region, and various wars were first fought and many cities captured, and thus the army besieged Jerusalem last of all.1 So he commanded his disciples, "See that you are not alarmed," but fulfill the task of your preaching. The spiritual Jerusalem has the physical Jerusalem as its type. For unless that temple had been destroyed, the observance of that Law would not easily have been restrained. But it was destroyed so that even if the Jews wanted to keep the Law later, they could not.

"For nation will rise against nation, and kingdom against kingdom."

"And there will be famines, plagues, and earthquakes in various places."

Whoever reads Josephus can find out what are the plagues and famines and earthquakes before Jerusalem was captured.2

"So when you see the desolating sacrilege spoken of by the prophet Daniel, standing in the holy place (let the reader understand)."

Some say that the abomination of desolation was the image of Caesar that Pilate put in the temple. But the Evangelist Luke more accurately interprets what is the desolating sacrilege. For in the place where the current passage of Matthew and Mark write, "But when you see the desolating sacrilege," in that very passage Luke writes, "But when you see Jerusalem surrounded by armies, then know that its desolation has come near." And so he says who are in Judea, namely, in order to show by the other resemblance of the explanation of this passage what is the desolating sacrilege standing in the Holy Place. For there was an army of foreigners and the Roman emperor standing around Jerusalem, which up until then was holy. Peter also explained this in Clement.3 Finally, the text itself also showed that this is the desolating sacrilege. For it is as if he goes back over all those things that he had said earlier and summarized them briefly and says, "So when you see the desolating sacrilege...standing," that is, "When you see those very battles now standing around Jerusalem, which you had previously heard about." ...The Roman army is called the desolating sacrilege because he would make the souls of many Christians desolate of God. For before the Romans captured Jerusalem, for half a week Christ bore by his doctrine the constant sacrifice of the Jews from his midst. For it is said that he taught for three years and six months; that number makes half of seven years, so that that sacrifice that was constantly in use would be removed from their midst and the sacrifice of praise would be offered with their voice and the sacrifice of righteousness in works and the sacrifice of peace through the Eucharist. But up until the end of the age there was an uproar because the Jewish custom of offering sacrifices was never rectified.

"Then let those who are in Judea flee to the mountains; let him who is on the housetop not go down to take what is in his house."

[N]ote that when he says, "Let those who are in Judea flee to the mountains," it is possible to understand this physically according to history at the time of the Romans.

"For then there will be great tribulation, such as has not been from the beginning of the world until now, no, and never will be."

[E]ven if the Jews were sinners up to the time of Christ, nonetheless they were his children, not his enemies, and so every wrath that fell on them was a chastisement coming out of mercy, not a condemnation coming down in anger. But when the Lord was crucified, they ceased to be his children and became his enemies. For that reason now no longer corrective chastisement came on them, but an eradicating condemnation. For Jerusalem was captured by the Assyrians and was repaired again. It was destroyed by Antioch and rebuilt again. It was invaded a third time by Pompey, and again it was repaired. For just as before the day of a person's death comes, he indeed seems to be ill but is not able to die, so also Judea was vexed before Christ but was not destroyed. But after they had committed that horrible patricide, crucifying the Son of the Father and bringing death on him from whom they received life--and what is worse, killing their Lord though they were servants and killing God through they were mortals--he struck them with such a blow that they never have been healed. For just as they committed such a crime as has never been committed nor ever will be again, so also such a sentence came on them as never has come nor ever will.4