John Owen: A Prophecy of Gospel Times Only 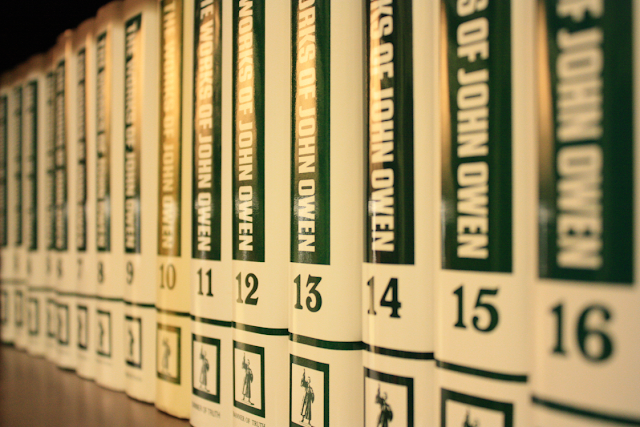 One of the last things I listed in one of my recent posts concerning Matthew chapter 10, I mentioned Hebrews 10:36-39 and II Peter 3:1-7 as apostolic references to the "coming of the Son of Man" in judgment upon Israel. Because those verses are often misunderstood by Christians today, I've taken the liberty to list a brief historical commentary from John Owen, the Prince of Puritans (or so he has been called), concerning those specific verses. For those who are unfamiliar with John Owen, he is recognized as one of the greatest biblical scholars among the English Puritans.

But first, before we get to John Owen's comments, we need to get our bearings straight. So we'll start by reading the text of Hebrews 10:36-39:

For you have need of endurance, so that when you have done the will of God you may receive what is promised. For, "Yet a little while, and the coming one will come and will not delay; but my righteous one shall live by faith, and if he shrinks back, my soul has no pleasure in him."  But we are not of those who shrink back and are destroyed, but of those who have faith and preserve their souls.


After [Jesus’] incarnation and ministry, he was now, with respect unto them, he that had come. …Yet after this [Jesus] was to come again. …He was to come for the punishment and destruction of his stubborn and inveterate adversaries. …Such as were declared enemies…


Of the first sort, were of the Jews, who slew him, who murdered him, and cast him out of the vineyard, and thereon continued their hatred against the gospel and all that made profession thereof. He was to come to “destroy those murderers, and to burn their city;” which fell out not long after writing of this epistle, and is properly intended in this place. See Matt. 24:3, 27, 30; 2 Pet. 3:4; Jude 14; Rev. 1:7; Mark 14:62; James 5:7,8.
For hereon ensued the deliverance of the church from the rage and persecution of the Jews, with the illustrious propagation of the gospel throughout the world.
…The Pagan Roman Empire was the second sort of his adversaries who were immediate enemies unto his gospel, and consequently to his person.1

Notice carefully that John Owen interpreted various references from Matthew 24, II Peter, Jude, Revelation, and James as though they all referred to the destruction of Jerusalem. This "coming" of the Son of Man was "for the punishment and destruction of his stubborn and inveterate adversaries." He then lists the 1st century Jews as the first of those adversaries! This was not an anti-semitic opinion of Owen. This was good exegesis of historical and biblical theology, straight out of the Scriptures -- the most Jewish bundle of literature to be found in the first century!
But notice also that John Owen specifically referred to II Peter 3:4. John Owen's comments on that apocalyptic portion of Scripture are very insightful. When commenting on 2 Peter 3:1-7 and it's description of a the old heaven and earth being destroyed and a new heavens and earth being created, John Owen appeals to Isaiah’s description of the Mosaic Covenant (Isa. 51):

The time when the work here mentioned, of planting the heavens, and laying the foundation of the earth, was performed by God, was when he “divided the sea” (v. 15), and gave the Law (v. 16), and said to Zion, “Thou art my people”—that is, when he took the children of Israel out of Egypt, and formed them in the wilderness into a church and state. Then he planted the heavens, and laid the foundation of the earth – made the new world. …And hence it is, that when mention is made of the destruction of a state and government, it is in that language that seems to set forth the end of the world. So Isaiah 34:4; which is yet but the destruction of the state of Edom. …And in our Savior Christ’s prediction of the destruction of Jerusalem, Matthew 24, he sets it out by expressions of the same importance. It is evidence then, that in the prophetical idiom and manner of speech, by “heavens” and “earth,” the civil and religious state and combination of men in the world, and the men of them, are often understood. …On this foundation I affirm that the heavens and earth here intended in this prophecy of Peter, the coming of the Lord, the day of judgment and perdition of ungodly men, mentioned in the destruction of that heaven and earth, do all of them relate, not to the last and final judgment of the world, but to that utter desolation and destruction that was to be made of the Judaical church and state.2

“But according to His promise we are looking for new heavens and a new earth, in which righteousness dwells.” What is that promise? Where may we find it? Why, we have it in the very words and letter, Isaiah 65:17. Now, when shall this be that God will create these “new heavens and new earth, wherein dwelleth righteousness”? Saith Peter, “It shall be after the coming of the Lord, after that judgment and destruction of ungodly men, who obey not the Gospel, that I foretell.” But now it is evidence, from this place of Isaiah, with chapter 66:21-22, that this is a prophecy of Gospel times only; and that the planting of these new heavens is nothing but the creation of Gospel ordinances to endure forever. The same thing is expressed in Hebrews 12:26-28.3

It is the dealing of God with the Church, and the alterations which he would make in the state thereof, concerning which the apostle treats. It is therefore the heavens and earth of Mosaical worship, and the Judaical church-state, with the earth of their political state belonging thereunto, that are here intended. These were they that were shaken at the coming of Christ, and so shaken, as shortly after to be removed and taken away, for the introduction of the more heavenly worship… and immovable evangelical church-state. This was the greatest commotion and alteration that God ever made in the heavens and earth of the church, and which was to be made once only…

This is the conclusion of the whole argumentative part of this epistle, that which was aimed at from the beginning. Having fully proved the excellency of the gospel, and state of the church therein, above that under the law, and confirmed it by an examination of all the concernments of the one and of the other, as we have seen; he now declares from the Scripture, according to his usual way of dealing with those Hebrews, that all the ancient institutions of worship, and the whole church-state of the old covenant, were now to be removed and taken away; and that to make way for a better state, more glorious, and that which should never be subject to change or alteration.4