Martin Luther and his naiveté 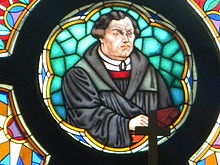 Many protestants will be surprised to learn that Martin Luther, who is most famous for jump-starting the "Great Protestant Reformation" by nailing his Ninety-five Theses to the church door in Wittenberg, Saxony, was convinced that the Pope (at that time, Leo X1) was morally innocent in the following threat of excommunication against him. Instead, Luther honestly thought that the Roman Curia2 was the real problem.

The Chronology of these events is actually quite simple, but they're important for grasping the significance of Luther's responsive letter to Pope Leo's threat. In 1517 Luther posted his "Ninety-five Theses" (or so they're called3). The next year, 1518, Pope Leo X ordered the Augustinians to control Luther and his teaching. Two years after that, on June 12th, 1520, Leo issued his papal bull Exsurge Domine ("Rise up, O Lord"), threatening Luther with excommunication from the Church, which Luther received in October. Under the threat of excommunication, Luther heeded some council of the Augustinians, who wanted Luther to write a letter to Leo explaining that he never intended to attack him personally. Below is a series of excerpts from his letter to Pope Leo X:

In the midst of the monsters of the present time, with whom the affair and controversy surrounding me has now entered its third year, I am compelled from time to time to look also to you and be mindful of you, most blessed father Leo.
...As far as I am aware, whenever it has been necessary to mention your person, I have said nothing but the best and most splendid things about you. If indeed I had done otherwise, I myself could by no means have approved it and would have supported wholeheartedly the judgment of those men concerning me. Nothing would have been more pleasing than to recant such rashness and godlessness on my part. I have called you Daniel in Babylon, and every reader knows quite well with what exceptional zeal I defended your well-known innocence against your slanderer Sylvester.
...Wherefore, most excellent Leo, I beg of you to allow that by this letter I have been cleared of all charges, and to persuade yourself that I have never thought any evil concerning your person; furthermore, that I am such a one as to wish the best things to befall you for eternity, and that I have no dispute with any man concerning morals, but only concerning the Word of truth. In all other things, I will yield to anyone, but I am neither able nor willing to forsake and deny the Word. He who thinks otherwise of me, or has imbibed my words in another sense, does not think rightly, and has not imbibed the truth.
Your See, however, I have of course denounced the institution that is called the Roman Curia. Neither you nor any man can deny it to be more corrupt than any Babylon or Sodom. As far as I can tell, it has that kind of deplorable, desperate, and lamentable unrighteousness. I have been filled with indignation that the people of Christ should be deceived under your name and the pretext of the Roman Church, and so I have resisted, and will resist, as long as the spirit of faith lives within me. Not that I am striving after impossibilities, or hoping that any good can be accomplished in that most disorderly Babylon by my work alone, with the fury of so many flatterers standing against me; rather, that I recognize myself to be a debtor to my Roman brethren. In their interest, it is necessary for me to consider in what way fewer of them may be ruined, or how they may be less ruined, by the Roman plagues. For nothing else from Rome has flooded the world for many years now---of which you yourself are not ignorant---than the laying waste of goods, of bodies, of souls, and the worst examples of all the worst things. For these things are clearer than light to everyone. From the Roman Church---at one time the most holy church of all---there has been fashioned the most lawless den of thieves, the most shameless brothel of all, a kingdom of sin, death, and hell, so that not even Antichrist, if he should come, would be able to think of anything to add to its wickedness.
Meanwhile you, Leo, are sitting like a lamb in the midst of wolves, like Daniel in the midst of lions. You dwell with Ezekiel among scorpions. What can you alone do against these monsters? ...Is it not true that there is nothing under the vast heavens more corrupt, more pestilential, more hateful, than the Roman Curia? For she incomparably surpasses the impiety of the Turks. So, in actuality, she who was once the gate of heaven is now lying open as a sort of mouth of hell. She is such a mouth as cannot be blocked up. Due to the pressing wrath of God, one course alone is left to us pitiable men: to call back and save some few, if we can, from that Roman abyss, as I have called it.
Behold, Leo my father, with what intent, with what cause I have raged against that seat of pestilence. I am far from having raged against your person. I even hoped that I would win favor and establish your safety, if I were to strike energetically and sharply at that prison of yours, or rather at your hell. For whatever assault contrived by any gifted men that can be mounted against the confusion of this godless Curia will be beneficial to you and to your safety, and to many others with you. They do their duty to you who do harm to her. They glorify Christ who in every way curse her. In short, they are Christians who are not Romans.4


1.  Giovanni de' Medici of the famous Florentine Medicis
2.  The Roman Curia was the council of cardinals and officials upon whom the Pope depended for making plans and implementing decisions for the bishops, abbots, parish priests and laity.
3.  The real name of the "Ninety-five Theses" was Disputation on the Power and Efficacy of Indulgences
4.  Martin Luther, Christian Freedom: Faith Working Through Love [St Louis, MO: Concordia Publishing House, 2011] selections from pp. 27-32


Posted by Epexegesis at 5:39 AM
Email ThisBlogThis!Share to TwitterShare to FacebookShare to Pinterest
Labels: Ethics, Miscellanea, Politikos, Them's Fightin Words