Who is Michael the Archangel?

In Kenneth Gentry's audio lectures on the book of Revelation, aptly titled The Divorce of Israel, he discusses a few things about Michael the Archangel which I had never considered previously. He notes that Revelation 12:7-9 describes, in symbolic language, a war in heaven between Michael and the Dragon, Satan. According to Gentry, Michael appears most famously in Dan 10:13, 21 and 12:1 where he is presented as the defender of the Church against her enemies.  Interestingly, we learn in the New Testament that this is the exclusive task of the Son of God (Eph 1:19-23; Eph 5:23; Mt 16:18). A similar impression is left with the "angel" or "messenger" of the Lord in Exodus 3:2, 8, and Judges 6:11-17. 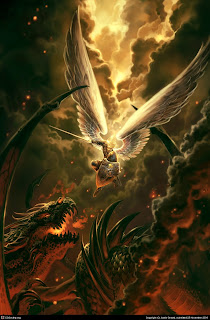 Furthermore, in Jude 9, “Michael” is called the “archangel,” which means "the ruler of angels" in Greek. Interestingly, elsewhere in Scripture we learn that Jesus is the one who comes with "his angels" in the glory of his Father (Matt. 16:27). In Matthew 13:41 we find again that Jesus will "send his angels" and gather out of his kingdom all lawbreakers. Elsewhere we are also told that he will send out "his angels" with a loud trumpet call, and they will gather his elect from one end of heaven to the other (Matt. 24:31). In Paul's letter to the Thessalonians (1 Thess. 4:16), he mentions that "The Lord himself will descend from heaven with a cry of command, with the voice of an archangel...". Paul says elsewhere that, "when the Lord Jesus is revealed from heaven with his mighty angels," he will grant relief to those who have afflicted his people (2 Thess. 1:7).

Drawing from the well of Old Testament allusions, it also seems as though this very same archangel--this ruler of the angelic hosts--is the one who confronts Joshua in the promised land (Joshua 5:14-15).