For Pentecost: Michael speaks the gospel to Adam 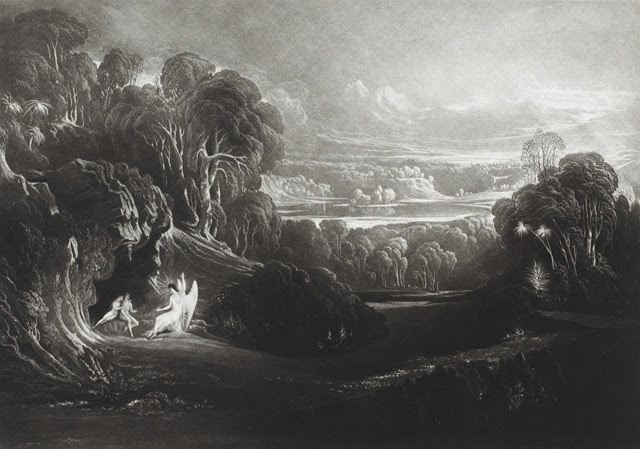 His death for man, as many as offered life
Neglect not, and the benefit embrace
By faith not void of works: This God-like act
Annuls thy doom, the death thou shouldest have died,
In sin for ever lost from life; this act
Shall bruise his head of Satan, crush his strength,
Defeating Sin and Death, his two main arms;
And fix far deeper in his head their stings
Than temporal death shall bruise the victor's heel,
Or theirs whom he redeems; a death, like sleep,
A gentle wafting to immortal life.
Nor after resurrection shall he stay
Longer on earth, than certain times to appear
To his disciples, men who in this life
Still followed him; to them shall leave in charge
To teach all nations what of him they learned
And his salvation; them who shall believe
Baptizing in the profluent stream, the sign
Of washing them from guilt of sin to life
Pure, and in mind prepared, if so befall,
For death, like that which the Redeemer died.
All nations they shall teach; for, from that day,
Not only to the sons of Abraham's loins
Salvation shall be preached, but to the sons
Of Abraham's faith wherever through the world;
So in his seed all nations shall be blest.
Then to Heaven of Heavens he shall ascend
With victory, triumphing through the air
Over his foes and thine; there shall surprise
The Serpent, prince of air, and drag in chains
Through all his realm, and there confounded leave;
Then enter into glory, and resume
His seat at God's right hand, exalted high
Above all names in Heaven; and thence shall come,
When this world's dissolution shall be ripe,
With glory and power to judge both quick and dead;
To judge the unfaithful dead, but to reward
His faithful, and receive them into bliss,
Whether in Heaven or Earth; for then the Earth
Shall all be Paradise, far happier place
Than this of Eden, and far happier days.

Posted by Epexegesis at 6:22 AM
Email ThisBlogThis!Share to TwitterShare to FacebookShare to Pinterest
Labels: Biblical Interpretation, Miscellanea