Eusebius' Proof of the Gospel 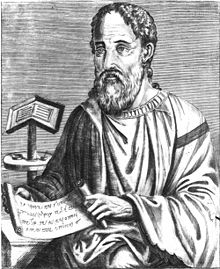 Eusebius, the Roman historian and Bishop of Caesarea in Palestine who lived from 263A.D. to 339A.D., is famous for writing works on early Church history and the life of Constantine. But there is another work which he wrote which is not very famous in our current generation, primarily because it's hard to find an english translation of the original Latin manuscript. That work was called Demonstratio Evangelica. Translated into English, that title means "The Proof of the Gospel." In Eusebius' Proof of the Gospel, he describes a number of historical events in connection with Jesus' prophecy as recorded in Matthew 24 and Luke 21. Commenting on those prophecies of Jesus, Eusebius writes:


But who would not be surprised at the fulfillment of a prophecy which revealed that the Jewish people would undergo these sufferings in the days of the Lord? For as soon as Jesus our Lord and Savior had come and the Jews had outraged Him, everything that had been predicted was fulfilled against them without exception 500 years after the prediction: from the time of Pontius Pilate to the sieges under Nero, Titus and Vespasian they were never free from all kinds of successive calamities, as you may gather from the history of Flavius Josephus... For after the coming of our savior Jesus Christ, their city, Jerusalem itself, and the whole system and institutions of the Mosaic worship were destroyed; and at once they underwent captivity in mind as well as body, in refusing to accept the Savior and Ransomer of the souls of men, him Who came to preach release to those enslaved by evil demons, and giving of sight to those blind in mind.1

And from that time a succession of all kinds of troubles afflicted the whole nation and their city until the last war against them, and the final siege, in which destruction rushed on them like a flood2 with all kinds of misery of famine3, plague4 and sword5, and all who had conspired against the Savior in their youth were cut off.6

When, then, we see that was of old foretold for the nations fulfilled in our day, and when the lamentation and wailing that was predicted for the Jews, and the burning of the Temple and its utter desolation, can also be seen even now to have occurred according to the prediction, surely we must also agree that the King who was prophesied, the Christ of God, has come, since the signs of His coming have been shown in each instance I have treated to have been clearly fulfilled.7