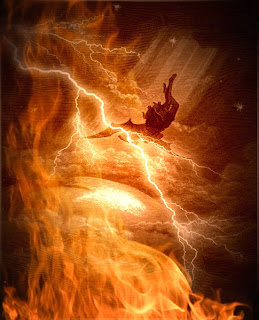 Below is one of my favorite scenes from Milton’s Paradise Lost.  It’s known as the “dialog in Heaven.” It comes from book 3, almost immediately after the first two books expound a major dialog in Hell between Satan and other demons who were cast there as punishment for their rebellion after their defeat in battle against Almighty God. Just before this dialog in Heaven begins, Satan and the other demons agree to exact revenge upon God by finding a way to entice Adam and Eve to rebel against God as well, and Satan freely offers to lead that rebellion. Satan then embarks on a cosmic voyage from Hell to Earth in order to exact his revenge.

In the heavenly dialog which follows, there are five distinctive sections. First, the narrator speaks, introducing the Heavenly Council in a glorious manner. Second, the Almighty Father speaks to His Son, followed by the narrator again. Third, the Only Begotten Son speaks in return to His Father, followed by a brief comment of the narrator again. Fourth, the Father replies to His Son, followed by an expression of silence among the angelic hosts (for the Father asks who, in all of heaven, would love mortal man and Divine justice enough to become moral themselves and satisfy man’s mortal crime with redeeming death).

Last of all, the Son speaks in response to the Father, offering Himself as the redemption of the human race. Below is Milton’s sketch of that epic dialog in Heaven:

Now had the Almighty Father from above,
From the pure Empyrean where he sits
High Thron'd above all highth, bent down his eye,
His own works and their works at once to view:
About him all the Sanctities of Heaven
Stood thick as Starrs, and from his sight receiv'd
Beatitude past utterance; on his right
The radiant image of his Glory sat,
His onely Son; On Earth he first beheld
Our two first Parents, yet the onely two
Of mankind, in the happie Garden plac't,
Reaping immortal fruits of joy and love,
Uninterrupted joy, unrivald love
In blissful solitude; he then survey'd
Hell and the Gulf between, and Satan there
Coasting the wall of Heav'n on this side Night
In the dun Air sublime, and ready now
To stoop with wearied wings, and willing feet
On the bare outside of this World, that seem'd
Firm land imbosom'd without Firmament,
Uncertain which, in Ocean or in Air.
Him God beholding from his prospect high,
Wherein past, present, future he beholds,
Thus to his onely Son foreseeing spake:

Onely begotten Son, seest thou what rage
Transports our adversarie, whom no bounds
Prescrib'd, no barrs of Hell, nor all the chains
Heapt on him there, nor yet the main Abyss
Wide interrupt can hold; so bent he seems
On desparate reveng, that shall redound
Upon his own rebellious head. And now
Through all restraint broke loose he wings his way
Not farr off Heav'n, in the Precincts of light,
Directly towards the new created World,
And Man there plac't, with purpose to assay
If him by force he can destroy, or worse,
By some false guile pervert; and shall pervert
For man will heark'n to his glozing lyes,
And easily transgress the sole Command,
Sole pledge of his obedience: So will fall,
Hee and his faithless Progenie: whose fault?
Whose but his own? ingrate, he had of mee
All he could have; I made him just and right,
Sufficient to have stood, though free to fall.
Such I created all th' Ethereal Powers
And Spirits, both them who stood and them who faild;
Freely they stood who stood, and fell who fell.
Not free, what proof could they have givn sincere
Of true allegiance, constant Faith or Love,
Where onely what they needs must do, appeard,
Not what they would? what praise could they receive?
What pleasure I from such obedience paid,
When Will and Reason (Reason also is choice)
Useless and vain, of freedom both despoild,
Made passive both, had servd necessitie,
Not mee. They therefore as to right belongd,
So were created, nor can justly accuse
Thir maker, or thir making, or thir Fate,
As if predestination over-rul'd
Thir will, dispos'd by absolute Decree
Or high foreknowledge; they themselves decreed
Thir own revolt, not I: if I foreknew,
Foreknowledge had no influence on their fault,
Which had no less prov'd certain unforeknown.
So without least impulse or shadow of Fate,
Or aught by me immutablie foreseen,
They trespass, Authors to themselves in all
Both what they judge and what they choose; for so
I formd them free, and free they must remain,
Till they enthrall themselves: I else must change
Thir nature, and revoke the high Decree
Unchangeable, Eternal, which ordain'd
Thir freedom, they themselves ordain'd thir fall.
The first sort by thir own suggestion fell,
Self-tempted, self-deprav'd: Man falls deceiv'd
By the other first: Man therefore shall find grace,
The other none: in Mercy and Justice both,
Through Heav'n and Earth, so shall my glorie excel,
But Mercy first and last shall brightest shine.

Thus while God spake, ambrosial fragrance fill'd
All Heav'n, and in the blessed Spirits elect
Sense of new joy ineffable diffus'd:
Beyond compare the Son of God was seen
Most glorious, in him all his Father shon
Substantially express'd, and in his face
Divine compassion visibly appeerd,
Love without end, and without measure Grace,
Which uttering thus he to his Father spake:

O Father, gracious was that word which clos'd
Thy sovran sentence, that Man should find grace;
For which both Heav'n and Earth shall high extoll
Thy praises, with th' innumerable sound
Of Hymns and sacred Songs, wherewith thy Throne
Encompass'd shall resound thee ever blest.
For should Man finally be lost, should Man
Thy creature late so lov'd, thy youngest Son
Fall circumvented thus by fraud, though joynd
With his own folly? that be from thee farr,
That farr be from thee, Father, who art Judg
Of all things made, and judgest onely right.
Or shall the Adversarie thus obtain
His end, and frustrate thine, shall he fulfill
His malice, and thy goodness bring to naught,
Or proud return though to his heavier doom,
Yet with revenge accomplish't and to Hell
Draw after him the whole Race of mankind,
By him corrupted? or wilt thou thy self
Abolish thy Creation, and unmake,
For him, what for thy glorie thou hast made?
So should thy goodness and thy greatness both
Be questiond and blaspheam'd without defence.

To whom the great Creatour thus reply'd:

O Son, in whom my Soul hath chief delight,
Son of my bosom, Son who art alone
My word, my wisdom, and effectual might,
All hast thou spok'n as my thoughts are, all
As my Eternal purpose hath decreed:
Man shall not quite be lost, but sav'd who will,
Yet not of will in him, but grace in me
Freely voutsaft; once more I will renew
His lapsed powers, though forfeit and enthrall'd
By sin to foul exorbitant desires;
Upheld by me, yet once more he shall stand
On even ground against his mortal foe,
By me upheld, that he may know how frail
His fall'n condition is, and to me ow
All his deliv'rance, and to none but me.
Some I have chosen of peculiar grace
Elect above the rest; so is my will:
The rest shall hear me call, and oft be warnd
Thir sinful state, and to appease betimes
Th' incensed Deitie while offerd grace
Invites; for I will cleer thir senses dark,
What may suffice, and soft'n stonie hearts
To pray, repent, and bring obedience due.
To Prayer, repentance, and obedience due,
Though but endevord with sincere intent,
Mine ear shall not be slow, mine eye not shut.
And I will place within them as a guide
My Umpire Conscience, whom if they will hear,
Light after light well us'd they shall attain,
And to the end persisting, safe arrive.
This my long sufferance and my day of grace
They who neglect and scorn, shall never taste;
But hard be hard'nd, blind be blinded more,
That they may stumble on, and deeper fall;
And none but such from mercy I exclude.
But yet all is not don; Man disobeying,
Disloyal breaks his fealtie, and sinns
Against the high Supremacie of Heav'n,
Affecting God-head, and so loosing all,
To expiate his Treason hath naught left,
But to destruction sacred and devote,
He with his whole posteritie must dye,
Dye hee or Justice must; unless for him
Som other able, and as willing, pay
The rigid satisfaction, death for death.
Say Heav'nly Powers, where shall we find such love,
Which of ye will be mortal to redeem
Mans mortal crime, and just th' unjust to save,
Dwels in all Heaven charitie so deare?

He ask'd, but all the Heav'nly Quire stood mute,
And silence was in Heav'n: on mans behalf
Patron or Intercessor none appeerd,
Much less that durst upon his own head draw
The deadly forfeiture, and ransom set.
And now without redemption all mankind
Must have bin lost, adjudg'd to Death and Hell
By doom severe, had not the Son of God,
In whom the fulness dwells of love divine,
His dearest mediation thus renewed:

Father, thy word is past, man shall find grace;
And shall grace not find means, that finds her way,
The speediest of thy winged messengers,
To visit all thy creatures, and to all
Comes unprevented, unimplor'd, unsought,
Happie for man, so coming; he her aide
Can never seek, once dead in sins and lost;
Attonement for himself or offering meet,
Indebted and undon, hath none to bring:
Behold mee then, mee for him, life for life
I offer, on mee let thine anger fall;
Account mee man; I for his sake will leave
Thy bosom, and this glorie next to thee
Freely put off, and for him lastly dye
Well pleas'd, on me let Death wreck all his rage;
Under his gloomie power I shall not long
Lie vanquisht; thou hast givn me to possess
Life in my self for ever, by thee I live,
Though now to Death I yield, and am his due
All that of me can die, yet that debt paid,
Thou wilt not leave me in the loathsom grave
His prey, nor suffer my unspotted Soule
For ever with corruption there to dwell;
But I shall rise Victorious, and subdue
My Vanquisher, spoild of his vanted spoile;
Death his deaths wound shall then receive, and stoop
Inglorious, of his mortal sting disarm'd.
I through the ample Air in Triumph high
Shall lead Hell Captive maugre Hell, and show
The powers of darkness bound. Thou at the sight
Pleas'd, out of Heaven shalt look down and smile,
While by thee rais'd I ruin all my Foes,
Death last, and with his Carcass glut the Grave:
Then with the multitude of my redeemd
Shall enter Heaven long absent, and returne,
Father, to see thy face, wherein no cloud
Of anger shall remain, but peace assur'd,
And reconcilement; wrauth shall be no more
Thenceforth, but in thy presence Joy entire.

Posted by Epexegesis at 6:46 AM
Email ThisBlogThis!Share to TwitterShare to FacebookShare to Pinterest
Labels: Genesis, Poetria