Great Adventures of Missing the Point 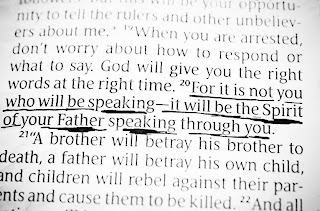 As I was preparing to teach Matthew chapter ten at a local bible study, I realized that there are numerous statements within it which Christians frequently use as "proof-texts" for their faith and faithfulness. For example, some Christians will quote Jesus' words, "Heal the sick, raise the dead, cleanse lepers, cast out demons," and they will conclude that this commission applies to Christians today as well (pentecostal christians and other charismatics come to mind). Also, when Jesus tells his disciples to "acquire no gold or silver or copper for your belts, no bag for your journey," some Christians interpret this as being applicable for their efforts of evangelism today (St. Francis of Assisi first comes to mind, and other christians who encourage the ascetic lifestyle). Numerous others could be cited, but I'm sure a handful of others will suffice (and these aren't even all of them from chapter ten alone):

My concern is this: Are well intentioned, faith-filled Christians today interpreting Matthew's gospel as he intended his words to be interpreted in his day by his Jewish audience? Wouldn't the proper perspective of interpreting these statements of Matthew chapter ten be to interpret these passages as they were originally received, instead of personalizing and modernizing the meaning of a 2,000 year old message as though it were directed to us?

If the primary meaning of this message by Jesus (as recorded by Matthew) was intended as a single coherent message, and not just a spattering of important eternal truths for Christians of every age, one would certainly hope that this would be a bit more obvious to us. (It should be obvious, but unfortunately it's not.) Instead, much of modern Christianity doesn't see this chapter as one coherent historical message limited to it's very close historical context and to Jesus' Jewish audience. Instead, many christians today want to believe (and indeed are often trained by eloquent pastors and teachers to believe) that  Jesus equates unbelievers with "wolves," and that his message to us is to view  all unbelievers as such. But is that really what Jesus meant when he said, "I am sending you out as sheep in the midst of wolves"?

Some Christians take another verse from chapter ten as meaning that they aren't being faithful to King Jesus if they're not being patriotic to the point of receiving persecution for their public behavior. Forget about how obnoxious, excessive, or obtuse Christians may appear to be during their expression of faithful patriotic zeal. The real important truth to remember is that there will be persecution as a result of faithful patriotism. They "will be dragged before governors and kings for my sake, to bear witness before them." Never forget that Jesus embraced the patriotic zeal of Americanism in Matthew chapter ten.

Some Christians also don't think they need to be equipped with knowledge, systematic doctrine, or any other type of detailed information in order to "witness" or evangelize because, allegedly, the Holy Spirit will give them the right words to say "in that hour." Others insist that the most important doctrine to remember while evangelizing is that Jesus is returning bodily any day now because we're living in the days which Jesus prophesied would come upon us once America finishes their work of evangelizing all the Jews. That's what Jesus meant when he said "you will not have gone through all the towns of Israel before the Son of Man comes." We all know that the "Son of Man" visiting Israel can only mean the physical bodily return of Jesus on a white horse on the Mount of Olives at the end of the world, right?  That passage (and others like it) couldn't possibly mean anything else, right?

And of course, a Christian should always keep in mind that the token virtue of being faithful until Jesus returns bodily is to have those of your own household become your enemies. This doctrine of Jesus is abundantly clear and impossible to misunderstand. Don't compromise by being friendly, patient, compassionate, or (heaven forbid) silent when others of your own household don't believe the truth revealed to you by God's Word and they express what they believe to the contrary. Instead, stick to your guns, stand up for what's "right," and focus all of your attention upon being faithful, even if that means those of your own family will become your enemies by hardening their hearts against God's truth which you have been commissioned to proclaim in their faces. Jesus taught Christians to think this way and behave these ways in Matthew chapter ten, right?

Posted by Epexegesis at 6:17 AM
Email ThisBlogThis!Share to TwitterShare to FacebookShare to Pinterest
Labels: Biblical Interpretation, Ethics, Matthew