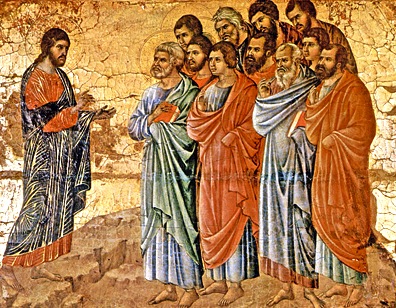 And [Jesus] called to himself twelve disciples and gave them authority over unclean spirits, to cast them out, and to heal every disease and every affliction. The names of the twelve apostles are these:
First, Simon, who is called Peter, and Andrew his brother; James the son of Zebedee, and John his brother;
Philip and Bartholomew; Thomas and Matthew the tax collector
James the son of Alphaeus, and Thaddaeus; Simon the Zealot, and Judas Iscariot, who betrayed him. (Matthew 10:1-4)

There are a number of interesting features concerning Matthew's list of "The Twelve." If we limit ourselves to Matthew's narrative alone, we only learn a handful of relevant facts which aid our understanding of the discourse which follows:

2)  These "twelve" were men. I know this chides with the spirit of our age and it's acceptance/tolerance of "biblical feminism," but it's a matter of historical fact. Jesus chose twelve males to represent him, not twelve females. Make of that what you will. I'm merely stating what was most obviously Jesus' desire for those who represent him before others. He could have chosen a woman. He could have chosen twelve women. Instead, he chose no women whatsoever.

3)  These "twelve" men were given authority by Jesus to do the things He had been doing previously, namely casting unclean spirits out of people to heal various diseases and burdens which caused suffering.

4)  These "twelve" are not simply "disciples"; they are now "apostles." As apostles, these men have been chosen as new rulers for and representatives of the people of Israel on behalf of Jesus, the King of Israel. They have been selected and called to represent the twelve tribes of Israel on behalf of Jesus and to "spy" out the land for giants and enemies of Yahweh, and to bring healing and restoration to those in want and need.

5)  The "first" of these twelve apostles is Simon, whose nickname was "Rocky." In Greek, the name "Peter" literally means "a Stone," along with its adjectival meaning of "Rocky" or "Stoney." Simon is always mentioned first on the lists of the twelve apostles (Mark 3:16ff., Luke 6:14ff., Acts 1:13ff.) most likely because he was considered a leader among all twelve. This doesn't mean that he was the leader -- the one and only sovereign arbiter over all twelve (or even the Christian churches). But it does clearly infer that Peter was known to be a leader among the twelve. In other words, this "Rocky" apostle had characteristics of one who functions as a leader. This shouldn't surprise us if we are familiar with the gospel narratives. All throughout the gospels, Peter is vividly portrayed as the most inquisitive and outspoken disciple, as well as the most ambitious one, the most confident one, and the one who takes the initiative most often before anyone else. Even with all of Peter's legitimate weaknesses -- weaknesses of spiritual blindness and vulnerability, doubt and skepticism, impetuous speech and zeal -- the Lord used them all to eventually shape him into a strong, mature leader of the faith. We should never forget that we often attribute faithlessness to Peter because of common misunderstandings. Even at times when Peter seems to be lacking the most faith among Jesus' apostles -- times like when he attempted to walk on water and he sank -- he is actually manifesting the characteristics of a leader. Remember, even though Peter attempted to walk on water, and sank, he was the only apostle with enough faith to get out of the boat and try!

6)  Next we learn that some of the apostles are brothers. Simon's (Peter's) brother is Andrew. The apostle John's brother is James. Matthew was "the tax collector" mentioned earlier in chapter nine. Another Simon is listed, and his nickname is given too. He is "the Zealot," or "the zealous one" (not to be confused with the first century anti-Roman terrorist group called "the Zealots").

7)  And last of all, we learn a couple things about Judas Iscariot. The first thing we learn is that Judas was the one who "betrayed" Jesus. Of course, this statement takes two things for granted: first, this Judas would eventually betray Jesus, and that, secondarily, until this man's name pops up again (and the next  time will be in chapter 26), we are supposed to keep his betrayal in the back of our minds.  We are supposed to be considering his ministry among the twelve with suspicion without having to diminish the powerful work of God through him. If the ultimate betrayer of Jesus can cast out demons and heal the sick in the name of Jesus, does that not give us the right to be suspicious about those who claim the same power and authority for themselves today?

Also, we learn one more thing peculiar to this Judas Iscariot. This Judas is the only one of the twelve which always has his hometown annexed to his name. His "last name" (so to speak) is not Iscariot. Iscariot is simply the way our Bibles translate his surname (i.e. the name which indicates his birthplace and location among the twelve tribes of Israel). Iscariot literally means "a man of Kerioth," which is a town located in the southern portion of Judea about ten miles south of Hebron. In other words, this Judas who betrayed Jesus was from Judea. This has multiple implications for Matthew's Palestinian-Jewish audience. First, this gives the strong impression that this Judas remained intimately connected with his family roots in the land of Judea, it's capital city being Jerusalem. It also might mean that Judas was the only Judean Jew among the twelve. After all, no other apostle is ever listed with his hometown annexed to his name in order to distinguish him from the others. The other gospels also give the strong impression that the other eleven apostles are from the land of Galilee, not Judea.

Ultimately, what this list of "the Twelve Apostles" confirms is that Israel was in need of new rulers and new shepherds to lead them safely into greener pastures; but not some rogue rulers. Israel clearly needed Jesus, but Jesus was becoming burdened with too much responsibility to handle it all himself, and so he delegated rulers to represent him as they went throughout the twelve tribes of Israel to "cast out unclean spirits, healing every disease and every affliction."