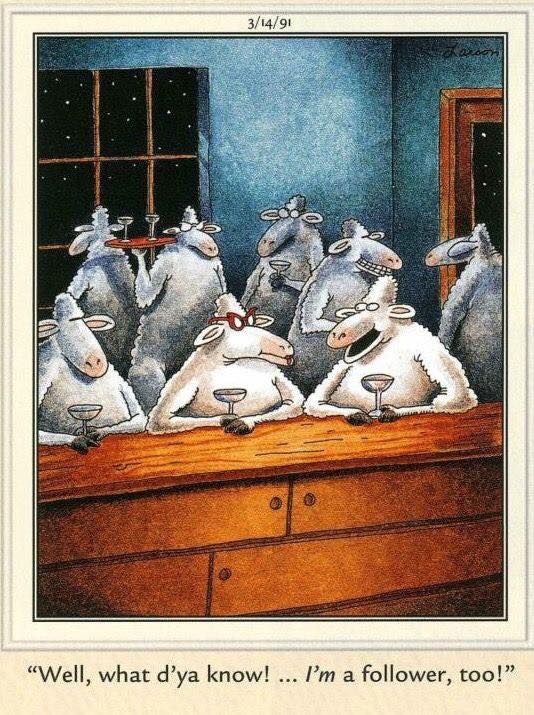 Who will guide me?
the sheeple said

Look there!
she said

Do not listen to them!
I will guide you—I, the one, who knows.
I can peel back the layers of truth and reveal to you all its secret inward parts.
said the gatekeeper

Why should we listen to you?
Who made you the one to authenticate?
the sheeple inquired

The Scientific Community.
said the gatekeeper

We have the degrees.
We have letters of recommendation.
We have articles published and peer reviewed.
We have the required skills of the scientific tradition,
to teach, train, and discern the truth.
said the gatekeeper

But I have a PhD, also.
said Mr. Humilis

And I have letters of recommendation from seven reputable universities.
said Ms. Tenir

I have dozens of articles, and even one book about my research, all of which have been peer reviewed before publication.
said Mrs. Vilificare

And I have many of the required skills of the accepted scientific tradition, too.
said Mr. Artire

Aha! But do you have the support of society?
And does society support your values or affirm your passions?

We, the ones who know, have such support and affirmation.
By understanding and living within the rigorous thought world of the communally supported Scientific Community, we can work together to inoculate and immunize future generations against the unhealthy consumption of propaganda.
Together we become safer, at home, and essential for the future good of society.

So beware: Who you choose to listen to forms your ability to see either correctly or in a warped and twisted manner.
Please listen to the Scientific Community instead of merely thinking independently, or following those who are offering conspiracy theories.
We want you to not only think for yourself, but also to think communally, where knowledge is cultivated and distributed by discerning knowers.
the gatekeeper sternly warned

You may hear about information wars, and even rumors of culture wars.
But be sure to not let anyone lead you astray with fake news.
For many will come to you in the name of the Scientific Community,
and they will try to lead you astray, as they have with many others.
Do not listen to them, or encourage them.
Do not share their nonsense.
Lean not on your own understanding,
but in all your ways acknowledge Science,
and it will direct your paths,
in ways which the future of society must go.
the gatekeeper insisted

But we’ve heard all that before.
said the sheeple

Gatekeepers like you have been selling that dogma for two thousand years,
and we think your predictions about the future are horseshit.

Your authenticated community of knowledge was once our community, too,
until some of us attempted to publish our peer reviewed research,
and tweet our professional, data-driven opinions publicly.
Then we were arrested and jailed on trumped-up charges,
and were publicly maligned by false reports,
or had our reputations publicly twisted,
or our integrity shot with holes by the people with influence around our circles,
or we were just completely ignored as deviants.

We repeatedly asked for evidence of what was an error,
and all we got was the typical libel of scientific cronyism.
We were fired and fined,
sued and weakened with constant financial assaults,
accused of being the ones spreading lies,
made out to have holes in our stories,
and persecuted.
We looked at the evidence according to your community guidelines and standards—which were ours at that time, too.
We closely inspected the reports and claims of others with degrees and letters of recommendation,
with published and peer reviewed articles,
and all the required skills of your sacred tradition—the same skills that many of us have, too.
Yet we became convinced that the public should not listen to you, the gatekeepers of discerning knowers,
and we no longer think that your guild should be the ones to authenticate what should be cultivated and distributed to guide others.

We published and publicized the data of our experience,
yet our research has been retracted by you.
Our life saving research has been withheld from public appeal because of you.
Our stories and documentaries were taken down from social media by those conspiring with you.
The artificial labels slapped upon us consist of quacks, theorists, and criminals.
We have become the ones shoved into a concentration camp for ethical cleansing.
And our experience of knowing within the Scientific Community is revealing:

You are the false prophets. You are the priests of culture. You are the rulers of this age, beholden to Herodian-like dynasties, centered on your precious temple, with your empire of thought built around it.

Posted by Epexegesis at 12:39 PM
Email ThisBlogThis!Share to TwitterShare to FacebookShare to Pinterest
Labels: Epexegesis, Poetria