The Proof of the Gospel: An Introduction 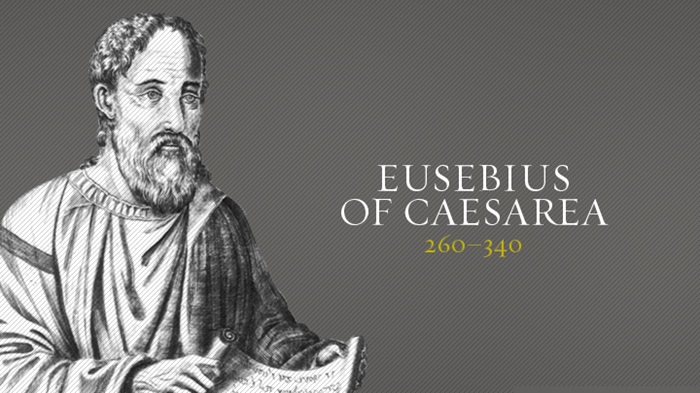 Over the next few months, I plan on posting regularly to a new series which highlights certain views of the early Christian Church, especially those views which relate to the "fulfillment" of Scripture in the events surrounding the first century Jewish wars that culminated in the destruction of Jerusalem and Israel's temple in 70 a.d., as prophesied in the Holy Scriptures. My hope, in the very least, is that Christians today notice how prevalent certain views were regarding the "fulfillment" of Jesus' words, the prophets before him, and the apostles after him.

In this post, and in many more to come, the excerpts are from Eusebius of Caesarea, a Roman historian and Bishop of Caesarea Maritima during the Council of Nicaea.

In case any Christian doubts the credibility of this Bishop and historian, let us recall the description of him given by Pope Benedict XVI:1

Eusebius is above all...the first historian of Christianity, but he was also the greatest philologist of the ancient church... Eusebius embraced different spheres: The Succession of the Apostles as the backbone of the Church, the dissemination of the Message... and the errors and then persecutions on the part of the pagans. ...The fundamental perspective of Eusebian historiography...is a 'Christocentric' history, in which the mystery of God's love for humankind is gradually revealed.

Benedict continues elsewhere in his address:

Another feature thus springs to the fore which was to remain a constant in ancient ecclesiastical historiography: it is the "moral intention" that presides in the account. Historical analysis is never an end in itself; it is not made solely with a view to knowing the past; rather, it focuses decisively on conversion and on an authentic witness of Christian life on the part of the faithful. It is a guide for us, too. Thus, Eusebius strongly challenges believers of all times on their approach to the events of history and of the Church in particular. He also challenges us: what is our attitude with regard to the Church's experiences? Is it the attitude of those who are interested in it merely out of curiosity, or even in search of something sensational or shocking at all costs? Or is it an attitude full of love and open to the mystery of those who know - through faith - that they can trace in the history of the Church those signs of God's love and the great works of salvation wrought by him?

With these important considerations in mind, we now move to some of the opening words in Eusebius' classic work, The Proof of the Gospel, which introduce us to both the importance and the prevalence of such views in the early Christian Church:


In addition to all this you can hear the wailings and lamentations of each of the prophets, wailing and lamenting characteristically over the calamities which will overtake the Jewish people because of their impiety to Him Who had been foretold. How their kingdom, that had continued from the days of a remote ancestry to their own, would be utterly destroyed after their sin against Christ; how their fathers’ Laws would be abrogated, they themselves deprived of their ancient worship, robbed of the independence of their forefathers, and made slaves of their enemies, instead of free men; how their royal metropolis would be burned with fire, their venerable and holy altar undergo the flames and extreme desolation, their city be inhabited no longer by its old possessors but by races of other stock,1 while they would be dispersed among the Gentiles through the whole world, with never a hope of any cessation of evil, or breathing-space from troubles. And it is plain even to the blind, that what they saw and foretold is fulfilled in actual facts from the very day the Jews laid godless hands on Christ, and drew down on themselves the beginning of the train of sorrows.
But the prophecies of these inspired men did not begin and end in gloom, nor did their prescience extend no further than the reign of sorrow. They could change their note to joy, and proclaim a universal message of good tidings to all men in the coming of Christ: they could preach the good news that though one race were lost every nation and race of men would know God, escape from the dæmons,2 cease from ignorance and deceit and enjoy the light of holiness: they could picture the disciples of Christ filling the whole world with their teaching, and the preaching of their gospel introducing among all men a fresh and unknown ideal of holiness: they could see churches of Christ established by their means among all nations, and Christian people throughout the whole world bearing one common name: they could give assurance that the attacks of rulers and kings from time to time against the Church of Christ will avail nothing to cast it down, strengthened as it is by God. If so many things were proclaimed by the Hebrew divines, and if their fulfilment is so clear to us all to-day, who would not marvel at their inspiration? Who will not agree that their religious and philosophic teaching and beliefs must be sure and true, since their proof is to be found not in artificial arguments, not in clever words, or deceptive syllogistic reasoning, but in simple and straightforward teaching, whose genuine and sincere character is attested by the virtue and knowledge of God evident in these inspired men? Men who were enabled not by human but by divine inspiration to see from a myriad ages back what was to happen long years after, may surely claim our confidence for the belief which they taught their pupils.3

Also, in the opening statement of his Ecclesiastical History, Eusebius tells us his purpose in writing such an important work:

As it is my purpose to record the successions of the holy apostles, together with the times since our Saviour, down to the present, to recount how many and important transactions are said to have occurred in Ecclesiastical History, what individuals in the most noted places eminently governed and presided over the church, what men also in their respective generations, whether with or without their writings, proclaimed the divine Word; to describe the character, times and number of those who, stimulated by the desire of innovation, and advancing to the greatest errors, announced themselves leaders in the propagation of false opinions, like grievous wolves, unmercifully assaulting the flock of Christ; as it is my intention, also, to describe the calamities that swiftly overwhelmed the whole Jewish nation, in consequence of their plots against our Saviour; how often, by what means, and in what times, the word of God has encountered the hostility of the nations; what eminent persons persevered in contending for it through those periods of blood and torture, beside the martyrdoms which have been endured in our own times: and, after all, to show the gracious and benign interposition of our Saviour; these being proposed as the subjects of the present work, I shall go back to the very origin and the earliest introduction of the dispensation of our Lord and Saviour the Christ of God.4