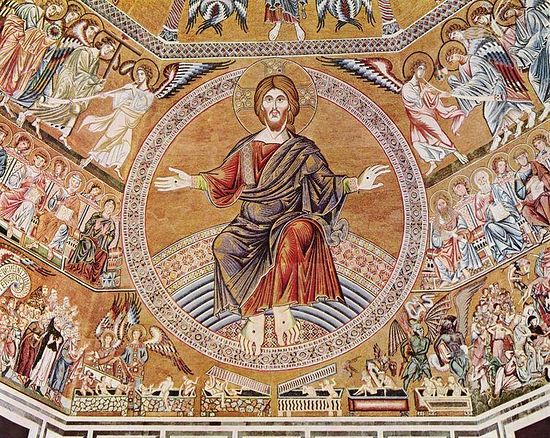 This is the second post in a series which covers the early Christian views pertaining to the interpretation of biblical prophecy as being “fulfilled” within the first century. Of particular interest to this discussion are key words and phrases used to describe the Lord's "appearance" or "coming" and the especially the events of the Jewish wars, the fall of Jerusalem, and the destruction of its temple in 70 a.d.

Continuing where we left off in the previous post, the church historian and Bishop, Eusebius of Caesarea, comments further about these events, only this time it’s regarding the first century Israelites who rejected Jesus in favor of what the corrupt religious authorities had been advocating. Referring to the consequences stated in Torah, Eusebius says that they had:

…fallen under Moses’ curse, attempting to keep it in part, but breaking it in the whole, as Moses makes absolutely clear: “Accursed is he, who does not continue in all the things written in this law, to do them.”*


And they have come to this impasse, although Moses himself foresaw by the Holy Spirit, that, when the new covenant was revived by Christ and preached to all nations, his own legislation would become superfluous, he rightly confined its influence to one place, so that if they were ever deprived of it, and shut out of their national freedom, it might not be possible for them to carry out the ordinances of his law in a foreign country, and as of necessity they would have to receive the new covenant announced by Christ.

Moses had foretold this very thing, and in due course Christ sojourned in this life, and the teaching of the new covenant was borne to all nations, and at once1 the Romans besieged Jerusalem, and destroyed it and the Temple there.  At once the whole of the Mosaic law was abolished, with all that remained of the old covenant, and the curse passed over to those who became lawbreakers, because they obeyed Moses’ law, when its time had gone by, and still clung ardently to it, for at that very moment the perfect teaching of the new Law was introduced in its place. And, therefore, our Lord and Saviour rightly says to those who suppose that God ought only to be worshipped in Jerusalem, or in certain mountains, or some definite places:

“The hour cometh and now is, when the true worshippers shall neither in this mountain nor in Jerusalem worship the Father. For God is a Spirit, and they that worship him must worship him in spirit and in truth.”*

So He said, and presently, not long after, Jerusalem was besieged, the holy place and the altar by it and the worship conducted according to Moses’ ordinances were destroyed, and the archetypal holiness of the pre-Mosaic men of God reappeared. And the blessing assured-thereby to all nations came, to lead those who came to it from the first step and from the first elements of the Mosaic worship to a better and more perfect life.2 Yes, the religion of those blessed and godly men, who did not worship in any one place exclusively, neither by symbols nor types, but as our Lord and Saviour requires “in spirit and in truth,” by our Saviour’s appearance became the possession of all the nations, as the prophets of old foresaw. For Zephaniah says the very same thing:

“The Lord shall appear against them, and shall utterly destroy all the gods of the nations of the earth. And they shall worship him each one from his own place.”*

Malachi as well contends against those of the circumcision, and speaks on behalf of the Gentiles, when he says:

“I have no pleasure (in you),3 saith the Lord Almighty, and I will not accept a sacrifice at your hands. For from the rising of the sun even to the setting4 my name has been glorified among the Gentiles; and in every place incense is offered to my name, and a pure offering.”5*

By “the incense and offering to be offered to God in every place,” what else can he mean, but that no longer in Jerusalem nor exclusively in that (sacred) place, but in every land and among all nations they will offer to the Supreme God the incense of prayer and the sacrifice called “pure,” because it is not a sacrifice of blood but of good works? And Isaiah literally shouts and cries his prophecy to the same effect:

Do we not say truly then that the prophets were inspired to foretell a change of the Mosaic Law, nay its end and conclusion? Moses lays down that the altar and the sacrifices should be nowhere else on earth but in Judæa, and there only in one city. But this prophecy says that an altar to the Lord shall be set up in Egypt, and that Egyptians shall celebrate8 their sacrifices to the Lord of the prophets and no longer to their ancestral gods. It foretells that Moses shall not be the medium of their knowledge of God, nor any other of the prophets, but a man fresh and new sent from God. Now if the altar is changed contrary to the commandment of Moses, it is beyond doubt necessary that the Law of Moses should be changed also. Then, too, the Egyptians, if they “sacrifice to the Supreme God,” must be admittedly worthy of the priesthood. And if the Egyptians are priests Moses’ enactments about the Levites and the Aaronic succession would be useless to the Egyptians. The time, therefore, will have come when a new legislation will be needed for their support. What follows? Have I spoken at random? Or have I proved my contention?

Behold how to day, yes in our own times, our eyes see not only Egyptians, but every race of men who used to be idolaters, whom the prophet meant when he said “Egyptians,” released from the errors of polytheism and the dæmons, and calling on the God of the prophets!  They pray no longer to lords many, but to one Lord according to the sacred oracle; they have raised to Him an altar of unbloody and reasonable sacrifices according to the new mysteries of the fresh and new covenant throughout the whole of the inhabited world, and in Egypt itself and among the other nations, Egyptian9 in their superstitious errors. Yes, in our own time the knowledge of the Omnipotent God shines forth, and sets a seal of certainty on the forecasts of the prophets.  You see this actually going on, you no longer only expect to hear of it, and if you ask the moment when the change began, for all your inquiry you will receive no other answer but the moment of the appearance of the Saviour. For He it was, of Whom the prophet spoke, when he said that the Supreme God and Lord would send a man to the Egyptians, to save them, as also the Mosaic oracles taught in these words: “A man shall come forth from his seed, and shall rule over many nations”;* among which nations the Egyptians would certainly be numbered. But a great deal could be said on these points, and with sufficient leisure one could deal with them more exhaustively. Suffice it to say now, that we must hold to the truth, that the prophecies have only been fulfilled after the coming of Jesus our Saviour.10

When beginning the next chapter, and after citing many scripture passages to prove his points thus far, Eusebius lays out more of his thoughts pertaining to the destruction of Jerusalem in 70a.d.  He writes:

When we shall have reached that point of the argument, I think I shall have proved that it is untrue to say that the hope of the Messiah was more proper for them than for us.   Then having demonstrated that for Jews and Greeks the hope of the promise was on an equality, so that those of the Gentiles would be saved through Christ would be in exactly the same position as the Jews, I shall proceed to show with super-abundance of evidence,11 that the divine oracles foretold that the Advent of Christ and the call of the Gentiles would be accompanied by the total collapse and ruin of the whole Jewish race, and prophesied good fortune only for a scanty few easy to number, while their city with its temple would be captured, and all its holy things taken away—prophecies which have all been exactly fulfilled.12