"If it's my will that he remains until I come, what is that to you?" 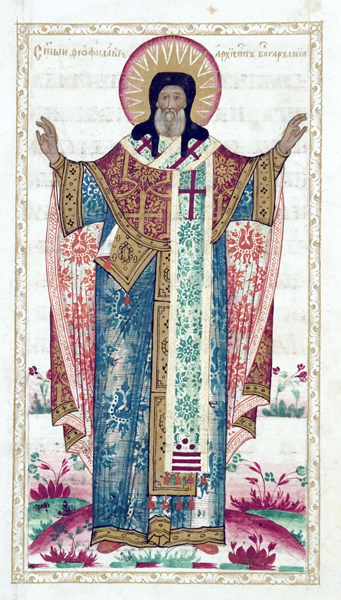 Now it's time to skip ahead a couple generations from where we last left off, to the witness of an Eastern Orthodox saint named Theophylact (1055-1108 A.D.), the Archbishop of Ohrid. Theophylact had quite a few interesting comments about Jesus’ promises in the Gospels, particularly those mentioned in Luke 21 and Mark 13 (which parallel Matthew 24 and all the other posts in this series). Archbishop Theophylact also reached the same conclusion that myself and many others throughout history have reached, namely, that Jesus’ prophecy about his own “coming” in John's Gospel (21:23) referred to the destruction of Jerusalem and its Temple in 70 A.D. That, and other similar excerpts from St. Theophylacts’s commentaries can be found in Thomas Aquinas’ Catena Aurea.

Now some have wished to place the fulfilment of these things not only at the future consummation of all things, but at the time also of the taking of Jerusalem. For when the Author of peace was killed, then justly arose among the Jews wars and sedition, But from wars proceed pestilence and famine, the former indeed produced by the air infected with dead bodies, the latter through the lands remaining uncultivated. Josephus also relates the most intolerable distresses to have occurred from famine; and at the time of Claudius Cæsar there was a severe famine, as we read in the Acts, (Acts 11:28.) and many terrible events happened, forboding, as Josephus says, the destruction of Jerusalem.1

But some say that the Lord hereby signified the devouring of children, which Josephus also relates.2

For, since the Lord had spoken much concerning the destruction of Jerusalem, His disciples wondered, that such numerous and beautiful buildings were to be destroyed; and this is the reason why they point out the beauty of the temple, and He answers not only that they were to be destroyed, but also that one stone should not be left upon another: wherefore it goes on: And Jesus answering said unto him, Seest thou these great buildings? there shall not be left one stone upon another, that shall not be thrown down. Now some may endeavour to prove that Christ’s words were false, by saying that many ruins were left, but this is not at all the point; for though some ruins had been left, still at the consummation of all things one stone shall not be left upon another. Besides it is related, that Ælius Adrian overturned the city and the temple from the foundation, so that the word of the Lord here spoken was fulfilled.3

That is, the Romans against the Jews, which Josephus relates happened before the destruction of Jerusalem. For when the Jews refused to pay tribute, the Romans arose, in anger; but because at that time they were merciful they took indeed their spoils, but did not destroy Jerusalem. What follows shews that God fought against the Jews, for it is said, And there shall be earthquakes in divers places, and there shall be famines.4

…Fitly also did He premise a recital of those things which concerned the Apostles, that in their own tribulations they might find some consolation in the community of troubles and sufferings. There follows: And ye shall be brought before rulers and kings for my sake, for a testimony against them. He says kings and rulers, as, for instance, Agrippa, Nero, and Herod. Again, His saying, for my sake, gave them no small consolation, in that they were about to suffer for His sake. For a testimony against them, means, as a judgment beforehand against them, that they might be inexcusable, in that though the Apostles were labouring for the truth, they would not join themselves to it. Then, that they might not think that their preaching should be impeded by troubles and dangers, He adds: And the Gospel must first be published among all nations.5

That is, if the Roman war had not been soon finished, no flesh should be saved; that is, no Jew should have escaped; but for the elect’s sake, whom he hath chosen, that is, for the sake of the believing Jews, or who were hereafter to believe, He hath shortened the days, that is, the war was soon finished, for God foresaw that many Jews would believe after the destruction of the city; for which reason He would not suffer the whole race to be utterly destroyed.6

[Marginal gloss by St Thomas]:7 After speaking of the things which were to happen before the destruction of the city, the Lord now foretells those which happened about the destruction itself of the city, saying, But when ye shall see the abomination of desolation standing where it ought not, (let him that readeth understand.)

Finally, Theophylact comments on John 21:18-24, a passage that all preterists agree with10 because John the apostle did live until the Lord’s “coming” in 70 A.D.. Most commentators from the first thousand years of church history, oddly, never notice that obvious connection which Theophylact (and apparently, others he knew) highlighted. He writes:

Some have understood, Till I come, to mean, Till I come to punish the Jews who have crucified Me, and strike them with the Roman rod. For they say that this Apostle (John) lived up to the time of Vespasian, who took Jerusalem, and dwelt near when it was taken.9