"That overthrow of Jerusalem is described" 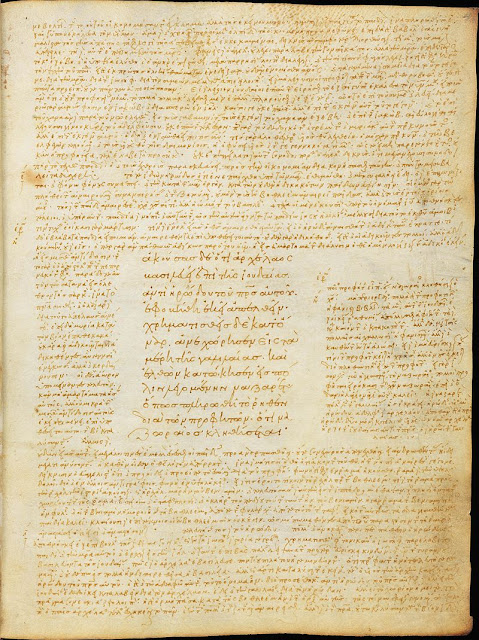 Continuing in this series, there are many more comments about first century prophetic fulfillment to be found among the Church Fathers. Three new Church Fathers (not yet presented in this series) and their comments can be found in this post, below. One is from Gregory of Nyssa, another is from Pseudo-Chrysostom, and the other is from Pope Gregory I.

By outer darkness, He means foreign nations; for these words of the Lord are a historical prediction of the destruction of the Jews, that they were to be led into captivity for their unbelief, and to be scattered over the earth.1

Or else, as He did not dry up the fig tree for its own sake, but for a sign that Jerusalem should come to destruction, in order to shew His power, in the same way we must also understand the promise concerning the mountain, though a removal of this sort is not impossible with God.2

But by this he signifies a fall to the very lowest, as if the punishment before the mystery of the incarnation, fell far short of that after the giving and preaching of the Gospel dispensation. And those spoken of are chiefly of Israel, who must of necessity forfeit their ancient privileges, and pay a heavier penalty than any other nation, because they were so unwilling to receive Him Who had long been prophesied among them, had been worshipped, and had come forth from them. In a most especial manner then he threatens them with not only a fall from spiritual freedom, but also the destruction of their city, and of those who dwelt among them. But a resurrection is promised to believers, partly indeed as subject to the law, and about to be delivered from its bondage, but partly as buried together with Christ, and rising with Him.3

Commenting on Matthew 12:25-26 and the kingdom which Jesus spoke of as being divided against itself, St. Hilary of Poiters (354 A.D.) writes:

But the word of God is rich, and whether taken simply, or examined inwardly, it is needful for our advancement. Leaving therefore what belongs to the plain understanding thereof, let us dwell on some of the more secret reasons. The Lord is about to make answer to that which they had said concerning Beelzebub, and He casts upon those to whom He made answer a condition of their answering. Thus, the Law was from God and the promise of the kingdom to Israel was by the Law, but if the kingdom of the Law be divided in itself, it must needs be destroyed; and thus Israel lost the Law, when the nation whose was the Law, rejected the fulfilment of the Law in Christ. The city here spoken of is Jerusalem, which when it raged with the madness of its people against the Lord, and drove out His Apostles with the multitude of them that believed, after this division shall not stand; and thus (which soon happened in consequence of this division) the destruction of that city is declared. Again He puts another case, And if Satan cast out Satan, he is divided against himself; how then shall his kingdom stand?4

Or, by the business of a farm, He denotes the Jewish populace, whom the delights of this world separated from-Christ; by the excuse of merchandize, the Priests and other ministers of the Temple, who, coming to the service of the Law and the Temple through greediness of gain, have been shut out of the faith by covetousness. Of these He said not, ‘They were filled with envy,’ but They made light of it. For they who through hate and spite crucified Christ, are they who were filled with envy; but they who being entangled in business did not believe on Him, are not said to have been filled with envy, but to have made light of it. The Lord is silent respecting His own death, because He had spoken of it in the foregoing parable, but He shews forth the death of His disciples, whom after His ascension the Jews put to death, stoning Stephen and executing James the son of Alphæus, for which things Jerusalem was destroyed by the Romans.5

Or, herein He may be shewing forth their punishment. As when dæmoniacs have been loosed from their infirmity, if they after become remiss, they draw upon themselves more grievous illusions, so shall it be among you—before ye were possessed by a dæmons, when you worshipped idols, and slew your sons to dæmon yet I forsook you not, but cast out that dæmon by the Prophets, and afterwards came Myself seeking to purify you altogether. Since then ye would not hearken to me, but have fallen into more heinous crime, (as it is greater wickedness to slay Christ than to slay the Prophets,) therefore ye shall suffer more heavy calamities. For what befel them under Vespasian and Titus, were much more grievous than they had suffered in Egypt, in Babylon, and under Antiochus. And this indeed is not all He shews concerning them, but also that since they were destitute of every virtue, they were more fit for the habitation of dæmons than before. It is reasonable to suppose that these things were said not to them only, but also to us. If after being enlightened and delivered from our former evils, we are again possessed by the same wickedness, the punishment of these latter sins will be greater than of the first; as Christ spake to the paralytic, Behold, thou art made whole, sin not, lest a worse thing come upon thee.6   (John 5:14)

By His armies (in verse 7) we understand the Romans under Vespasian and Titus, who having slaughtered the inhabitants of Judæa, laid in ashes the faithless city.7

By these words the Roman leaders are pointed out. For that overthrow of Jerusalem is described, which was made by the Roman emperors Vespasian and Titus.8