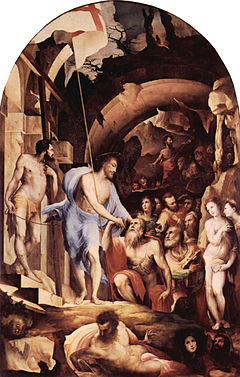 In the end was the Death
and the Death was alongside those not seen
and the Death was a god
He was alongside the Most High God in the end
Some things were appointed to him
and without him nothing unseen could be appointed
What was appointed to him was dead
and those dead awaited vindication
Their vindication was in being raised
and being raised
Death and Hades are needed no more
There was a man sent from the Most High God
whose name is Jesus
He came for his martyrs who bore witness for vindication
that all might be loyal to him
He was the judge and he came to witness their judgment
The final judgment that vindicates the dead provides eternal life for the many
He was among the many
and the many were appointed through him
and the many knew him
He descended to his own
and his own gladly received him
But to all who did not receive him
who were not loyal to his name
he declared them to be destroyed
who were born mortal and not of the Most High God
And the Death became perdition
and was thrown into the Lake with Hades
where those not seen are stripped of glory
the one-of-a-kind garments which their father grasped after
full of majesty and authority
Jesus witnessed to the last enemy and cried out
Where is your sting?
Where is your victory?
For the fullness of life his martyrs lived
The rest received one stone upon another
For the curse of the Torah was declared through the dead
But mercy and eternal life through Jesus of Nazareth
No one had ever been raised from the Death to the Most High
Death robbed them of their wedding garments
so they would not enter into glory
Jesus made this known

Posted by Epexegesis at 10:20 AM
Email ThisBlogThis!Share to TwitterShare to FacebookShare to Pinterest
Labels: Epexegesis, Eschatology, John, Poetria, Typology