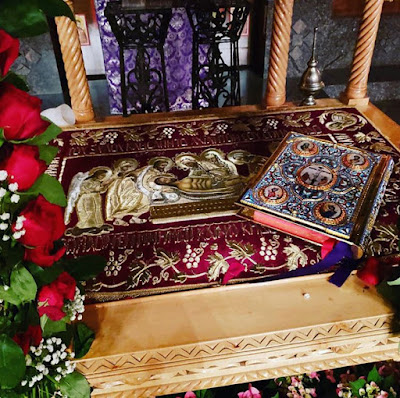 And behold, the curtain of the temple was torn in two, from top to bottom, and the earth shook, and the rocks were split, and the tombs also were opened, and many bodies of the saints who had fallen asleep were raised, and coming out of the tombs after his resurrection they went into the holy city and appeared to many.

The Greek text underlying this translation is this:


If we are reading sections b and b' carefully, whether in English or Greek, it becomes apparent that this is one long sentence connected with the word "and" many times. It should also be equally apparent that somewhere within this lengthy sentence there are likely two distinct days of events being described. What is not clear is the event taking place on a different day than the day of crucifixion. All of the listed events are lumped together, giving the impression that all of them occurred either on the day Jesus was crucified, or all of them occurred "after his resurrection."

This is how I imagine these events taking place: The curtain of the temple was torn, the earth quaked, and the rocks were split on the day Jesus gave up his spirit. Then, on the "third day" when Jesus was raised from the dead-ones in Hades, the tombs were opened, and many bodies of the saints were raised up to life again, and they came out of the tombs after his resurrection and went into the holy city to appear to many.

After his resurrection (μετὰ τὴν ἔγερσιν αὐτοῦ), many bodies of the saints who had died were raised with Jesus. At that time, they were obviously not yet raised to heaven. For this first event, they were not merely raised spiritually either (also, obviously). They were previously alive in a place known as the unseen realm of Sheol/Hades, but for the first time in human history they were released from bondage. At that punctiliar point in time, many among the dead-ones were raised along with Jesus, and life was given to their mortal bodies again (i.e. their fleshly "bodies" were "raised" to life again). Since we don't know what happened to their fleshly bodies after that time mentioned in Matthew 27:52-53, at least not any more than we know what exactly happened to Jesus' flesh and bodily organs after this time (and yes, I am aware of how much philosophical speculation has occurred throughout Christian traditions in that regard), I am simply not going to speculate further. But it is safe to believe that once they were raised to eternal life with Jesus (whenever that was), they still remain alive today.

Did their fleshly bodies ascend to heaven?

Did their fleshly bodies decay again after age, followed by ascension into heaven as "spiritual bodies," as Saint Paul says (whatever he meant)?

Does a precise answer to that even matter?

I believe that Christian traditions are sufficient to guide people along a path of discovering helpful answers to those questions, without everyone ever collectively needing to know absolutely everything for certain.

What matters to us now is that a human being has been raised from the dead-ones of Sheol/Hades!

And that human being was Jesus of Nazareth!

And by the power and authority of Jesus, many dead have been raised with him!

And that event initiated a transfiguration of authority over the cosmos!

It may also be worth pointing out that this brief event mentioned in Matthew 27:52-53 does not define what "resurrection" means. "Resurrection" is a term that could describe a lot of things. But that shouldn't stop us from realizing that its use in this passage means something profound. It means that along with the Second Adam being raised from Hades, the first Adam and many others in Hades who had been captive with the dead up to that time could have been raised with him; and if they could have been raised (as some obviously were, according to Matthew's account), then those were indeed raised at that time, starting the day Jesus was raised. It was the "many" among the tombs of Jerusalem who testified to the fact that the dead are now able to be raised because Israel's promised Christ is risen, and by his death he has trampled upon death. This teaching of eternal life made possible and real in Jesus of Nazareth was no light or insignificant matter; and neither was Jesus' final judgment upon the old creation, when the rest of the dead were raised, and Hades/Sheol became no more.


Posted by Epexegesis at 5:05 AM
Email ThisBlogThis!Share to TwitterShare to FacebookShare to Pinterest
Labels: Eschatology, Literary Structure, Matthew, Pascha