The Law is not for the Righteous, but for the Unrighteous 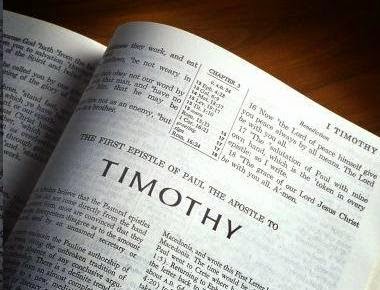 My friend Jeff Wencel has offered an intriguing analysis of I Timothy 1:8-11 over on his blog. I read his comments with two thumbs up all the way to the end, but a comment he made in passing against "theonomistic types" of interpretation caused me to re-read his post. I was intrigued about why he thought his take on the subject differed so noticeably from "theonomistic types" of exegesis, so I commented on his Facebook page about this. He requested that I share my thoughts on my blog so we could interact publicly in the good old fashioned public iron sharpening sort of way. Below is a stab at my first response to Jeff's comments. The main comments of Jeff's that I am responding to (below) are found on our Facebook thread:


Those who live in line with the sound doctrine, the righteous, don't need the law. It's not laid down for them. Isn't this what the text is saying?

Well, the first thing that comes to my mind is that you notice Paul's point in stating that "the Law" is not one in which it is used for the righteous (emphasis is mine), but yet you think that necessarily disqualifies or runs counter to theonomic exegesis. I don't think that terminology does, at least not necessarily; certainly not according to the surrounding context of discipline. What you interpret "for the righteous" to mean and what a theonomist interprets that to mean may differ in how broadly it can be applied socially, but because I appreciated your thoughts on the passage I'm going to try and offer a theonomic exegesis that doesn't disqualify or run counter to what you think it means, i.e. that those who live in line with sound doctrine don't need the law.

What a theonomist would question is what you mean by "needing the law" (as stated in your blog post). In a bold attempt to speak on behalf of most theonomists today, I don't believe they would equate the "lawful use of the Law" with "needing the law." They might associate the two, but it's more likely that they would equate the unlawful use of the Law with needing the Law; that is, needing the Law as a just standard to restrain "the lawless and disobedient, the ungodly and sinners" (I Tim. 1:9).

The second thing that came to my mind was your insertion of the concept: "a lawful use of the law is to understand that it is not laid down for the righteous." Your interpretation of that statement seems to be question begging. Paul does not say that the lawful use of "the Law" looks like understanding a thing. Rather, it seems that by understanding Paul's derivative list of Law-illustrations, that would have helped Timothy identify what unlawful uses of "the Law" look like. It looks like those unholy and profane, those who strike their father and mother, murderers, fornicators, homosexuals, kidnappers, liars, perjurers (I Tim. 1:9-10). The illustrations listed by Paul are of those who are "unjust" and not using the law "lawfully." They all fall under moral condemnation as laid down in the Law itself, and are subject to civil and/or ecclesiastical penalties under the "the Law." This is extremely obvious for those who are familiar with the Torah and it's first century abuse by Jewish authorities.

Perhaps breaking down the sentence even further will help clarify where a theonomist is coming from (it helps me, at least): "Now we know that the Law is good, if one uses it lawfully …in accordance with the gospel of the glory of the blessed God with which I have been entrusted."

The "knowing/understanding" that "the Law is not laid down for the just, etc…" seems to imply that some people--like Timothy--recognize and value the just character of God's Law, and therefore can lead by a righteous example among others, not falling under the sanctions of God. Those who use the law lawfully, unlike murderers, kidnappers, homosexuals, etc…, are those who use the Law in accordance with the gospel of the glory of the blessed God with which Paul was entrusted.

As you mentioned in passing in your blog post, the context is about men teaching divergent doctrine. Timothy is receiving instructions of this sort from Paul because, according to the previous verse, "certain persons" have "swerved" from stewardship in the Word of God by using "the Law" unlawfully, "promoting speculations," "devoting themselves to myths and endless genealogies," having "wandered away into vain discussion, desiring to be teachers of the law, without understanding either what they are saying or the things about which they make confident assertions." I may be reaching a bit in saying this, but the references to genealogies, myths, and teachers of "the Law" sounds a lot like certain Jewish "teachers." If that is correct, they were using the Law unlawfully, and therefore were worthy of God's sanctions. Timothy, of course, could only impose sanctions which were lawful within ecclesiastical jurisdiction.

Since Paul has the topic of just-treatment ("just use of the Law") in mind in the entire first chapter, he may want Timothy to recognize that his own treatment and response toward the law-abusers must be lawful. Not only does Paul argue as though his own sinful actions toward God and other Christian Jews deserved justice according to the Law, he highlights that God showed mercy according to the Law "because [he] acted ignorantly in unbelief" (I Tim. 1:13). The "certain persons" (i.e. Jewish teachers) described earlier in this same chapter need to be evaluated by Timothy in a similar light. Do they deserve justice or mercy according to God's Law? The Law teaches the holy character of God through both, and Timothy needs to use the law lawfully in his manner of discipline.

This idea of "lawful use of the Law" continues to linger on in the background of chapter one. Paul exhorts Timothy to wage "good warfare." To a theonomist, that seems like an odd statement without Paul assuming God's Law as the standard for New Covenant ethics. Notice the adjective "good" with regard to the warfare Paul exhorts him to wage. It's not just "warfare" in the abstract, as though all means of warfare were always good and lawful. Timothy is to wage good warfare, which may, at some point in time, necessitate ecclesiastical discipline, like it did with Paul (i.e. handing Hymenaeus and Alexander over to Satan so they would learn not to blaspheme; I Tim. 1:18-20). But it also may need to be applied in the civil realm too. That would be a broader application of how all of this ties in with Christian sanctification and discipline, and that would also be outside Timothy's jurisdiction as an officer of the Church.

Does this help clarify things at all Jeff?