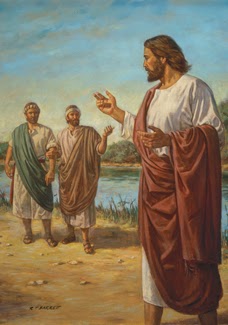 An important aspect of mission often lost in the shuffle of activity throughout Matthew's gospel is Jesus’ posture around people of various Israelite parties (or “denominations,” for lack of a better contemporary term). In Matthew 8:18-22 and 9:9-17 we are given two different accounts about two types of disciples.[i] In 8:18-22, the first disciple is a scribe, and he comes to Jesus addressing him as his “Teacher,” seeking to follow him “where ever” (ὅπου ἐὰν) he goes. Sensing his embellished commitment, Jesus tests his willingness to commit as a disciple by warning him that he will have “no where” (οὐκ που) to rest from his labors if he follows Jesus “where ever.” Then a second disciple enters the scene, but we aren’t told anything about him. Jesus simply tells him to let the dead bury their own dead. However, this unnamed disciple is at least given some hope. At least Jesus responds to his expressed commitment by saying “follow me.” Jesus didn’t bother saying much else to the scribe.

I realize that preachers often interpret this passage as though this second disciple wasn’t willing to place Jesus first in his mission of life, but I think that Matthew had a different point to make in this portion of the narrative.  Perhaps this second disciple really did not attend his father's funeral.  For all we know, Jesus' words cut right to his heart and the second disciple followed Jesus onto the boat and to the other side of the sea.  We don't know, and no other synoptic gospel alludes to the contrary.  If this second disciple is set in contrast with the first disciple—the scribe who was rejected by Jesus—then it's possible that this second disciple is an example of one who did count the cost and actually followed Jesus.  Certainly there is a lesson of priorities to be gleaned from this story.  The second disciple is concerned about burying his father first, before following in Jesus’ footsteps.  But an equally obvious lesson to be gleaned from this story is that those who actually commit to following Jesus "wherever" he goes, even though they may not have a place to rest because of the many burdens to be carried, are actually gaining life.  "Follow me," Jesus said, "and let those who are dead bury their own dead."  In other words, Jesus is saying: "By following in my footsteps, there is life." And with both of these types of disciples, Jesus doesn’t waste any time. He tested their willingness to commit, and then moved on. If they truly did follow him “wherever,” Jesus knew he would have opportunity to train them later on, as the days and weeks passed by.  This example of drawing boundaries and setting priorities for one’s mission, yet still being willing to generously serve those who get on board with the seriousness of Jesus’ mission, in is an important skill to acquire for those interested in gathering disciples.


[i] R T. France, [NICNT Commentary on Matthew] notes that these ten miracles were presented as one "collection," and that there also appears to be a unique placement of each miracle into three distinctive groups when compared with the other two synoptic gospels.  He writes: “The collection consists of nine separate miracle stories comprising ten individual miracles (since one of the stories, 9:18-26, contains two intertwined miracles of healing), which are arranged in three groups of three (8:1-17; 8:23-9:8; 9:18-34).  Between these three groups are two narrative interludes (8:18-22; 9:9-17) each of which focuses on the call to discipleship and the response of a variety of individuals to that call." (p. 300).  The result of his description looks something like this (below):

Posted by Epexegesis at 8:13 AM
Email ThisBlogThis!Share to TwitterShare to FacebookShare to Pinterest
Labels: Biblical Interpretation, Epexegesis, Literary Structure, Matthew