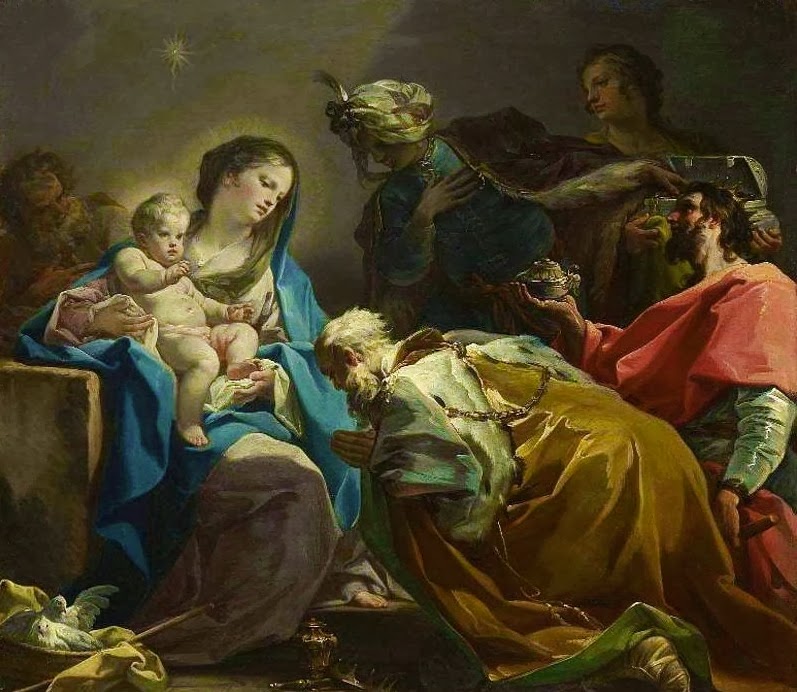 Ephiphany is a season of light, as reflected in a standard liturgical reading this day from Isaiah 60:1-7. As a season of light, it manifests that light that is seen in Jesus Christ. But the message surrounding and leading up to Isaiah 60 teaches us so much more. It teaches us what the righteousness of that light looks like and the tremendous privilege we have to worship that light, and be in that light, and to rejoice is having that light dwell in us, shining so bright that it glorifies our Father in heaven.

In Isaiah 58:3, the people of God have a complaint against Yahweh, and this sets up the background for appreciating the message of chapter 60. They ask, "Why have we fasted and don't see it? Why have we humbled ourselves and you take no knowledge of it?" There are good reasons for Israel's concern. Threats of invading enemies and political alliances are against them, and Yahweh doesn't seem to care. Israel seeks Yahweh in prayer daily, awaiting His response. They profess with their lips that they "delight to know the ways" of Yahweh. They even ask for righteous judgments upon their enemies. And if that wasn't enough evidence, Israel is even said to have a posture of worship that "delights in drawing near" to Yahweh in sacrificial gifts to prove their faithfulness to Him (Isa. 58:2). Israel has a complaint against Yahweh because Yahweh is not responding to their cries or delivering them from their oppressors. They plead with God for deliverance, humbling themselves before Him in desperation. And to some degree He hears them too, but his perspective is quite different from theirs.

Yahweh says they do all of these righteous deeds--all these prayers, petitions, fasts, and sacrifices--"as if they were a nation that did righteousness and did not forsake the judgment of their God." (Isa. 58:2). While they humbled themselves before Yahweh in prayer, petitioning Him with righteous requests for His judgments upon their wicked oppressors, they themselves are oppressing their own workers (58:3). They fast so their voice could be heard on high, and they even prostrate themselves, spreading sackcloth and ashes under themselves (58:4-5). But this is not the type of fasting Yahweh wants from His people:

Is not this the fast that I choose: to loose the bonds of wickedness, to undo the straps of the yoke, to let the oppressed go free, and to break every yoke?


Is it not to share your bread with the hungry and bring the homeless poor into your house; when you see the naked, to cover him, and not to hide yourself from your own flesh? (Isa. 58:6-7)

The people are truly in distress, and they truly want Yahweh to deliver them from their oppressors. This is why they fast. This is why they cry unto Him. But the kind of fasting Yahweh wants from them is to loosen the shackles of oppression, let their own oppressed servants go free, feed the hungry with their own bread (not the bread which others work for), bring the homeless into their own home (not sending them off somewhere else), and clothing the destitute who are naked. When Israel does that, Yahweh says their light will shine forth like the dawn, and He will bring healing upon them speedily (58:8).

Israel's enemies would often intimidate them by pointing out that Yahweh cannot save. If He could, He would, or so they thought. After all, His people were diligent in sacrifices and prayer according to Yahweh's own word. But He must not be able to save because He is not saving. His hand must be too short or his ear too dull that He cannot save them when they need Him most (59:1) That's Israel's perspective when things are looking dark and gloomy (59:9).

The problem with thinking this way is that Yahweh is not weak at all. If he wanted to rescue them from oppressors, his arm is long enough to do that. Yahweh ears are not dull either. He hears every cry, but their iniquities have ruptured His relationship with them. Their sins have hidden Yahweh's face from them so that He does not hear (59:2). Their "hands are defiled with blood" too (59:3), but the blood they have shed is not from murdering others. It's the blood shed by unjustly suing others, going to law against their neighbor for dishonest gain, relying on empty pleas and slanderous lies in their favor, and conceiving mischief which, in turn, gives birth for further iniquity (59:3-4). Their courts are thoroughly corrupt, not just the judges sitting on the bench. The way of peace is not truly known by the people, and there is no justice in the path they have chosen to walk. They think they're pursuing peace. They think they're faithfully active in social justice. But they have made their roads crooked, and therefore "no one who treads on them knows peace" (59:8). Justice is inverted, righteousness stands far away in the distance, truth stumbles in the public squares, uprightness isn't even allowed to enter the gates of the city, and those who flee from evil make themselves a prey (59:14-15). Yahweh saw all of this, and it displeased Him that there was no justice to be found in the land, and no man willing to intercede on behalf of the oppressed (59:15-16a).

Then we find these amazing words of Isaiah's gospel:

...then His own arm brought him salvation, and His righteousness upheld him.


He put on righteousness as a breastplate, and a helmet of salvation on his head.
He put on garments of vengeance for clothing, and wrapped himself in zeal as a cloak.


According to their deeds, so will He repay, wrath to His adversaries, repayment to His enemies; to the coastlands He will render repayment.
So they shall fear the name of the Yahweh from the west, and His glory from the rising of the sun, for He will come like a rushing stream, which the wind of the Yahweh drives.

“And a Redeemer will come to Zion, to those in Jacob who turn from transgression,” declares the Lord.  “And as for me, this is my covenant with them,” says the Lord: “My Spirit that is upon you, and my words that I have put in your mouth, shall not depart out of your mouth, or out of the mouth of your offspring, or out of the mouth of your children’s offspring,” says the Lord, “from this time forth and forevermore.”

Yahweh's gospel is to those in Zion, where He dwelt in the midst of His people. And the gospel message to those in Zion was that even though Yahweh had justly left Israel to suffer from their own wicked devices for a time, Yahweh would not abandon Zion entirely. He would return and deliver "those in Jacob who turn from transgression." He would even come like a rushing stream, driven by the wind of His spirit, to redeem them. This would be for the purpose of having His name feared and His glory shown from east to west. This would be accomplished by the Word and work of His Spirit. He would place His Spirit upon them and put His words in their mouth, and in their children's mouth, forever, so they would glorify Him. At the time of Isaiah's prophecy, Zion was suffering under darkness and gloom because of their sins, but Yahweh promised to come and be their light. By coming and being their light, He would place His Spirit upon them so His light would shine through them. This is the good news for the nations in Isaiah's prophecy. This is the message of Epiphany. This is the background that sets up the message of Isaiah 60:1-7:

Arise! Shine! For your light has come, and the glory of Yahweh has risen upon you!


For behold, darkness shall cover the earth, and thick darkness the peoples; but the Lord will arise upon you and His glory will be seen upon you!
And nations shall come to your light, and kings to the brightness of your rising.
Lift up your eyes all around and see: They all gather together, they come to you.
Your sons shall come from afar, and your daughters shall be carried on the hip.
Then you shall see and be radiant.
Your heart shall thrill and exult, because the abundance of the sea shall be turned to you.
The wealth of the nations shall come to you.
A multitude of camels shall cover you, the young camels of Midian and Ephah.
All those of Sheba shall come.
They shall bring gold and frankincense, and shall bring good news, the praises of Yahweh.
All the flocks of Kedar shall be gathered to you. The rams of Nebaioth shall minister to you.
They shall come up with acceptance on my altar, and I will beautify My beautiful house.

When Yahweh comes to redeem His people, He sends His Spirit to illumine their darkness, and they become objects of His shining glory as a result. When they turn away from transgression, the glory of Yahweh returns to his house and His glory shines through their worship. When they turn from their own greed and selfishness, feeding the poor with bread of their own, His light shines through their good deeds. When they clothe the naked with their own clothes and shelter the homeless in their own homes, then the light of Yahweh is seen in them. When their hands stop shedding blood through lying, slander, injustice, and dishonest gain, then the nations will be attracted to their light, precisely because it is Yahweh's light that illumines them.

As I said in the beginning, Isaiah 60 gives us a glimpse as to the kind of glorious light we walk in, the kind of light that Israel eventually saw in Jesus the Messiah. That Light is worthy to receive "the wealth of nations" from all over--from the far south-eastern lands of Midian, Ephah, and Sheba with their gifts of gold and frankincense (Matt. 2:1-2, 9-11), and from the local pastures of Kedar and Nebaioth with the shepherds and their flocks (Luke 2:8-20). That Light is worthy to receive our worship. That light is the true light which gives light to everyone (John 1:9). Whoever does what is true comes to that Light, so that it may be clearly seen that their works have been carried out in God (John 3:21). In that Gospel, the gospel lived in and through the Spirit of Jesus Christ, the darkness is passing away and the true light is already shining (I John 2:8).