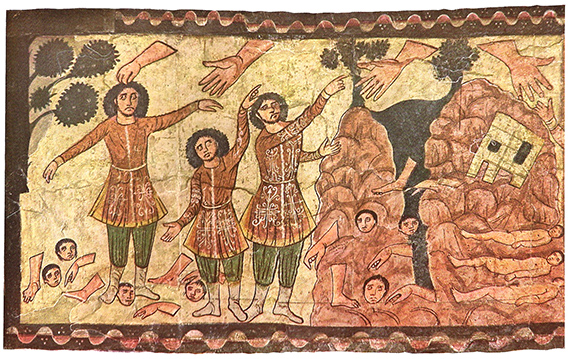 Continuing in the recent series about the seamless message of first century fulfillment throughout the New Testament scriptures (here and here), I have gathered a few quotes from Dale Allison Jr’s excellent study, The End of the Ages Has Come: An Early Interpretation of the Passion and Resurrection of Jesus. In it, Allison devotes scholarly attention to chunks of overlooked and obscure passages of Scripture to see how they relate to the topic at hand.

In his chapter on Matthew, he makes some remarkable comments which I think are both profound and questionable in relation to Matthew 27:51b-53. Those verses are:

And the earth shook, and the rocks were split. The tombs also were opened. And many bodies of the saints who had fallen asleep were raised, and coming out of the tombs after his resurrection they went into the holy city and appeared to many. (ESV)

Before I quote Allison in detail, I want to point out that the context in which he makes his remarks has to do with an evaluation made by Donald P. Senior, in his published monograph, The Passion According to Matthew: A Redactional Study, as it relates to the resurrection of “holy ones.” Allison points out the following:

Senior’s evaluation of the background of Matt. 27:51b-53 also invites criticism. His claim that our passage depends primarily upon Ezekial 37…is questionable. …Despite the parallel between Ezek. 37:12 and Matt. 27:52, there is another Scripture that lays claim to bear directly on our text: Zech 14:4-5.1 The affinity between the two passages has probably gone largely unnoticed because, in the Christian tradition, Zech 14:4-5 has not been interpreted as an account of the resurrection. The north panel of the Dura-Europos synagogue (mid-third century A.D.), however, provides evidence that the passage was so understood within ancient Judaism. Although many scholars have looked primarily to Ezekiel 37 for the interpretation of the panel, there can be little doubt that Zech 14:4-5 is also reflected. In the section which portrays the resurrection of the dead, the Mount of Olives (indicated by the two olive trees on the top of the mountain) has been split in two—precisely the event prophesied in Zech 14:4—and the revived dead are emerging from the crack. The fallen building on the slopes of the mountain probably symbolizes an earthquake (Zech 14:4), and those resurrected are in all likelihood here identified with the “holy ones” of Zech 14:5. Such an interpretation gains some support by (1) the Targum on Zech 14:3-5: the passage is introduced with God blowing the trumpet ten times to announce the resurrection of the dead; (2) the Targum on the Song of Songs (8:5): “When the dead rise, the Mount of Olives will be cleft, and all Israel’s dead will come up out of it, also the righteous who have died in captivity; they will come by way of a subterranean passages and will emerge from beneath the Mount of Olives”; and (3) later rabbinic uses of Zech 14:5: the “holy ones” of Zechariah are more than once identified not with the angels but with the ancient saints, specifically the prophets (for example, Midr. Rabbah on Song of Songs 4.11.1; on Ruth 2; and on Eccles. 1.11.1; cf Ign. Magn 9). The passage from the Targum on the Song of Songs (2) clearly represents an interpretation of Zech 14:4-5 and is the perfect literary parallel to the panel at Dura. It appears, therefore, that Zech. 14:4-5 was understood in some Jewish circles to be a prophecy of the resurrection.

Once Zech 14:4-5 is read as a prophecy of the resurrection, its relation to Matt. 27:51b-53 becomes manifest. In both texts (1) a resurrection of the dead takes place immediately outside of Jerusalem…; (2) there is an earthquake; (3) the very schizo is used in the passive, in connection with a mountain (Zechariah) or rocks (Matthew); and (4) the resurrected ones are called hoi hagioi.2 These parallels are sufficient to permit the conclusion that Matt. 27:51b-53 is based in part on Zech 14:4-5 and not, as Senior holds, solely upon Ezekiel 37.3

A few paragraphs later, Allison makes a few striking remarks about the relationship between these passages and Matthew 25:31-46. He continues:

...Matthew has apparently supplied the following introduction to the parable of the sheep and goats in 25:31-46: "'When the Son of man comes in his glory, and all the angels with him [kai pantes hoi aggeloi met auto]...'" As others have observed, the Greek [in brackets] strongly recalls Zech 14:5 LXX: kai pantes hoi ago met auto. Now, if Matt. 25:31 is indeed a redactional composition based on Zech 14:5, the exegete is faced by two riddles. First, while hoi hagioi of Zech. 14:5 are the angels (hoi aggeloi) in Matt. 25:31, they are the resurrected saints (ton hagion) in Matt. 27:52-53. Second, while Matt. 25:31 sets the fulfillment of Zech. 14:5 in the future ("'When the Son of man comes..."), Matt. 27:53 narrates the realization of Zechariah's vision. One is thus confronted by two rival interpretations of Zech. 14:5. If it is unlikely that both came from the same hand, then since Matt. 25:31 is probably redactional, 27:52-53 probably is not.4

Here is my takeaway from these insights:

1) There are no actual "riddles" which the exegete is faced with if Jesus actually raised the holy ones from the "dead ones" in Sheol/Hades.

2) "Angels" and "holy ones" only appear to be conceptually different because Christian traditions have largely neglected serious study of the relationship between the two. As far as the unseen realm of this world is concerned, modern exegetes still have much to learn as they do to unlearn.

3) Matthew 27:53 narrates the realization of Zechariah's vision because God raised Jesus up along with the righteous dead who were in Sheol/Hades.

4) Matthew 25:31ff is not--I REPEAT, NOT--about the end of the world, or the end of time, or the so-called "second coming" of Jesus where, allegedly, he returns to earth bodily. Matthew 25:31ff most naturally fits within a first century context of fulfillment.

5) The event narrated in Matt. 27:53 is significant because that was evidence that Jesus is the guarantor of all who would be raised up to eternal life with God thereafter. That was the very first time in human history where human beings were raised up to the presence of God. Previously, they had all been in Sheol/Hades, awaiting final judgment about their eternal destination. God then vindicated his Son by raising him out of the dead-ones. Jesus also led a whole host of captives with him to heaven, to rule and reign in the resurrection. Not everyone was raised with Jesus at the time of his resurrection from the dead-ones. The wicked remained until their final judgment in AD70.

7) Numerous theologians (and scholars) throughout history have noted that Zech. 14:4-5 referred to events which received their fulfillment in the first century. Notable among the Church Fathers is Theodore, bishop of Cyrus (423-457 AD), who connected Zech. 14:4-5 with the destruction of Jerusalem in AD70. These types of symbolic connections did not go unnoticed among the Church Fathers, as I have shown in a separate series.

8) Perhaps most intriguing find within all of this is the little, tiny cross-reference of Ignatius of Antioch which Allison made in passing. To be exact, Allison referenced Ignatius' Letter to the Magnesians, chapter nine.5 In that particular chapter, Ignatius exhorts his Christian disciples to not keep the Sabbath of Judaism, but live instead "in accordance with the Lord's Day, on which our life also arose through him and his death (which some deny)." Only one verse later, he connects the holy ones of history with those who were anticipating being raised up from the dead-ones in Sheol/Hades along with their Messiah: "how can we possibly live without him [Jesus], whom even the prophets, who were his disciples in the Spirit, were expecting as their teacher? This is why the One for whom they righty waited raised them from the dead (ἐκ νεκρῶν) when he came."

This past fulfillment of raising up holy ones from the abode of the dead-ones (i.e. Sheol/Hades) is what justifies his other remarks bracketing the letter with regard to his own personal hope and exception to "reach God" when he dies (1:2; 14:1). For Ignatius of Antioch, the whole notion of reaching God was made possible by the definitive end and final judgment upon the Old Creation. For Ignatius, there is no more a message of awaiting resurrection from the dead-ones after a period in Sheol/Hades; there is only eternal death or resurrection unto eternal life with Christ, which, of course, makes perfect sense since Ignatius wrote after AD70.

9) Matthew 25:31ff is probably not redactional. The affinity between Matt. 25:31ff and 27:52-53 has probably gone largely unnoticed because, in the Christian tradition, very few modern scholars consider most (or all) eschatological "end-times" remarks as actually being fulfilled in the first century.  There are many great reasons to consider the ways in which Church Fathers thought otherwise.

10) Modern scholars like Allison and Senior can't make sense of resurrection in the first century because they're assuming something imaginary, something that is part of a later Christian tradition about bodily resurrection. Christian tradition is loaded with debates about that doctrine. Early Judaisms had similar debates. Regardless of whether bodily resurrection at the end of the physical cosmos is philosophically cogent and true, as long as we approach these texts literarily, we cannot help but notice that the expectation surrounding the New testament message consistently witnesses to soon-coming first century events; and as long as we assume that those New Testament scriptures are historically reliable and rhetorically coherent, I think it's safe to say that Allison and Senior (along with scholars like them) tend to read back into the text what became popular dogmas centuries after their fulfillment. The message of being raised "out of" or "from the dead-ones" (ἐκ νεκρῶν) make more sense if it was actually fulfilled in first century events (which, as Ignatius of Antioch pointed out, some deny).

1. On that day his feet shall stand on the Mount of Olives that lies before Jerusalem on the east, and the Mount of Olives shall be split in two from east to west by a very wide valley, so that one half of the Mount shall move northward, and the other half southward. And you shall flee to the valley of my mountains, for the valley of the mountains shall reach to Azal. And you shall flee as you fled from the earthquake in the days of Uzziah king of Judah. Then the Lord my God will come, and all the holy ones with him. (ESV)
2. hoi hagioi is the transliteration of the Greek text, οἱ ἅγιοι, which means “the holy ones”
3. Allison Jr., pp. 42-44
4. Ibid. p. 44-45
5. This was referenced in the first, lengthy paragraph above, in sub-point (3), which mentioned rabbinic sources. One of Ignatius's letters ("Ign. Magn 9") is compared with those remarks in rabbinic sources because that letter makes a lot of comments in contrast with the philosophy of rabbinic judaism in the first century.

Posted by Epexegesis at 12:23 AM
Email ThisBlogThis!Share to TwitterShare to FacebookShare to Pinterest
Labels: Epexegesis, Eschatology, Ezekiel, Matthew, Zechariah