The Capital of Futurism

G.K. Chesterton once said that too much capitalism does not mean too many capitalists, but too few capitalists. That, of course, was a witty way of pointing out the real problem of economics and free markets in practice: Capitalism is easily tempted to conspire with civil governments to foster monopolies over an entire industry with only a few capitalists largely in control, under the auspices of an oligarchy, instead of allowing the market to actually be more free through organic entrepreneurial enterprise. I want to take this idea and spin it a little bit, and replace free market capitalism with eschatological futurism.

With regard to the well-known problems of eschatology in practice and the liberty to look at historical texts to interpret them honestly without being demonized, I wish the same could be said for futurism, but unfortunately there are not too few futurists; there are far too many--far too many who believe in whatever they're told about it, and far too few who are willing to research and think for themselves. I consider it to be a truism that over the last one hundred years of academia there has been a monopoly over the market of eschatological dogmas. In the Church, I have found there to be a surprising amount of liberty with regard to the promoting the reliability of the New Testament historical witness; but in the academies around the world, the environment is very different. It doesn't matter which "New Testament" author is researched, used, or cited. Among the many doctrines propounded, almost all academicians unswervingly swear allegiance to the same dogmas: that the end of the ages did not come in the first century, and the parousia was delayed (and must still be delayed); therefore all "data" collected from new testament witnesses and even non-canonical literature of that general era must be jammed through a peer-reviewed process that, in the very least, attempts to cohere with those dogmas.

However, just a cursory glance through the new testament literature should provide a sense of eschatological coherence. I personally think that the same can be said with some popular non-canonical literature surrounding the Bible (like the Didache, Epistle of Barnabas, 1 Clement, etc.) but if we don't see it clearly in the New Testament we won't be able to apply it to our critical thinking outside the Bible either. We will just allow our minds to be programmed by the guild and the sources they insist we must believe in order to be saved by their dogmas.

All of this made me realize that I have something to share with the public that I have not yet shared.

Below is a screenshot of one page from an academic paper I wrote earlier this year in response to a major publication by Cambridge University Press. Currently my paper is under review, so I'm not going to say anything more about that. Nevertheless, today I had a strong urge to share footnote #74 of that document, because, if read carefully, and taken seriously as reliable history, one can only presume that these authors were describing the same first century events, and those events actually occurred, or they were all delayed into the distant future, even beyond the current century in which we live. In other words, there is a timeline of events in which something cataclysmic was believed to occur soon, and there isn't room for parts of it to get pushed off thousands of years into the distant future.

Below is that footnote. All I ask is that you think about this seriously. I have studied thousands of pages of academese and I am personally convinced that all the eschatological mumbo-jumbo of academic guilds theorizing about imaginary sources is vastly more far-fetched than just taking the new-testament texts (along with all of their variants) at face value. Either something cataclysmic occurred in first century Israel, and that influenced the course of history, or the New Testament witness is false and unreliable: 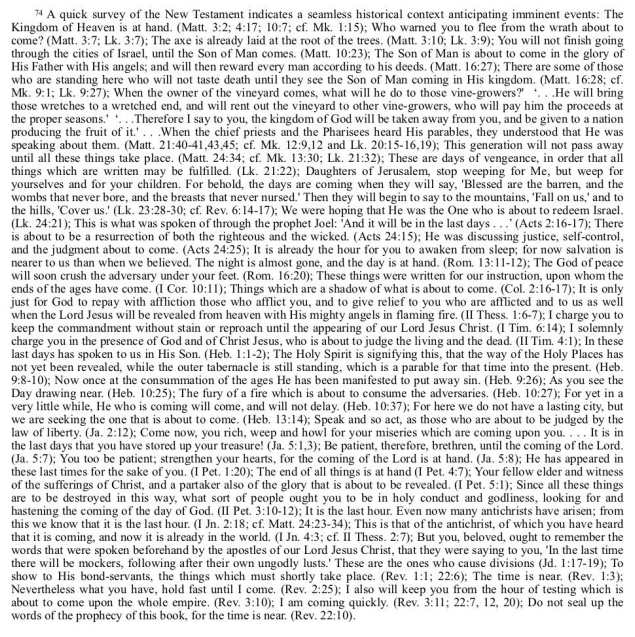 Last of all, for those who have been trained to play safely in the eschatological Ouija of "already-not-yet" paradigms, I just want to point out that I understand why and how those paradigms typically work. I also was reared in already-not-yet hermeneutical presumptions. Yet I don't think any attempts at justifying those paradigms, offered by fundamentalists or critical scholars, are credible. I have spent fifteen years looking for one credible justification, and have not found one to be convincing by comparison with their fulfillment in well-documented first century events. The "data" doesn't actually add up to "already fulfilled-but-not-yet-fulfilled", or consummated, or whatever. One either believes the New Testament witness is historically reliable and rhetorically coherent, or not. It cannot be both under any already-not-yet paradigms. And if not both, then I think one might as well seriously consider playing around in the Jumanji of source-critical dogmas.