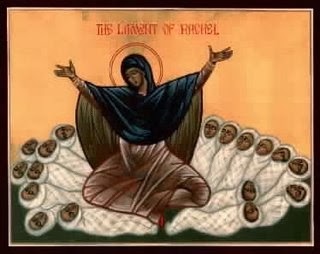 Continuing where we last left off in this series, Matthew 2:13-23 reads:

Now when thy had departed, behold, an angel of the Lord appeared to Joseph in a dream and said, "Rise, take the child and his mother, and flee to Egypt, and remain there until I tell you, for Herod is about to search for the child, to destroy him." And he rose and took the child and his mother by night and departed to Egypt and remained there until the death of Herod. This was to fulfill what the Lord had spoken by the prophet,

Then Herod, when he saw that he had been tricked by the wise men, became furious, and he sent and killed all the male children in Bethlehem and in all that region who were two years old or under, according to the time that he had ascertained from the wise men. Then was fulfilled what was spoken by the prophet Jeremiah:

“A voice was heard in Ramah,  weeping and loud lamentation,  Rachel weeping for her children;  she refused to be comforted, because they are no more.”2

Certain of the Jews interpret this passage thus: when Jerusalem was captured under Vespasian, countless thousands of captives were led through this way by Gaza and Alexandria to Rome. But others say that in the final captivity under Hadrian when the city of Jerusalem was overthrown, innumerable people of diverse ages and both sexes were sold at the marketplace of Terebinthus. …Let these people say what they want. We say that the Evangelist Matthew has rightly taken up this testimony because it is the place where Rachel was buried and she wept for the sons of those nearby in the surrounding houses as if she were weeping for her own sons.3

Some questions arise from these comments of Jerome: Why would Jewish scholars consider this passage from Jeremiah as needing to be fulfilled around 70 A.D.? Why insist upon a specific exile of Jews to Rome under Vespasian or a general dispersion of Jews across the Roman empire by Hadrian? Why not view Jeremiah’s prophecy as already being fulfilled in the Israel's history? After all, Jeremiah seems to have been describing events in Israel’s near future, events surrounding their return from Babylonian captivity.

I suspect, as I do with other post-70A.D. Jewish commentaries, that Jewish tradition has kept a close watch upon the Christian scriptures, especially those Christian gospels which reveal that their promised Messiah did come, and a massive exodus did occur, and that their promised Messiah did deliver Israel out of their long-awaited exile. It seems that they were diverting attention away from the historic Christ-centered reality of Jesus tabernacling among Israel and leading a great exodus of His people out of the land of Israel prior to the destruction of Jerusalem in 70 A.D., in order to retain their views about Jesus not being the promised Messiah.

In the last post I mentioned a few times that Matthew’s gospel is about Israel. But it doesn’t take much imagination to realize that Matthew’s gospel is about Jesus too. Yet it’s not about both isolated from each other. It’s about Jesus as Israel. It’s about Jesus and His covenant people together, both head and body together, dying and rising together. As Jerome noted well, Matthew has “rightly taken up” the testimony of Jeremiah 31:15 in the events surrounding Jesus and Israel’s life together. If we stop and think about it a bit more, Matthew's reference from Jeremiah 31 only makes sense if both Jesus and Israel are identified as God’s Son.

In chapter 31, Jeremiah’s message is particularly noteworthy because it is directed to Ephraim by name. “I am a Father to Israel, and Ephraim is my firstborn,” says the Lord (Jer. 31:9). Ephraim is also described as Yahweh’s “dear son” and “darling child” (v. 20), always expected to live up to the image of Yahweh’s Son. However, Ephraim was not Joseph’s actual firstborn son. When Joseph brought his firstborn son before his father, Israel laid hands on Joseph’s second child, Ephraim, instead, blessing him as the firstborn even though Manasseh was the actual firstborn. This typology of first and second sonship is nothing new to the history of Israel, being seen in numerous other examples (e.g. Ishamel and Isaac, Esau and Jacob, Reuben and Joseph, Levi and the twelve tribes, Adam and Jesus), and it runs through the message of Jeremiah 31 too. Ephraim, like Jesus, is the second son, a second Adam, chosen to receive the promised inheritance of the actual firstborn. But in the context of Jeremiah 31, when the Lord speaks of Ephraim, He speaks as though Ephraim bears the image of the first Israel, the first Adam, who fell in the garden sanctuary and was later exiled into the land. He speaks as though His son had already been disciplined, as though Ephraim had already been taken into exile. Time and time again, the northern kingdom of Israel broke covenant with Yahweh, and Yahweh responded by showing mercy time and time again; but when Jeremiah spoke in chapter 31, northern Israel had already been taken captive. Ephraim was already no more, which is why Rachel is described as weeping for her children. Rachel was the wife of Jacob (i.e. Israel) and therefore the mother of Israel’s children, but now Ephraim had gone into exile, finally receiving his due for repeated breaches of God’s covenant; and in exile, what hope could there possibly be for the future of Yahweh’s people? This is the context in which Matthew (2:18) quotes Jeremiah 31:15 as finally being fulfilled:

Matthew does something unexpected with this “fulfillment” passage though, something similar to what Jerome described the Jewish scholars doing in his own day. Matthew interprets Jeremiah 31:15 as fulfilling events within his own generation. Instead of interpreting those events as being fulfilled in the past when Israel actually returned from Babylonian exile, Matthew interprets Jeremiah 31:15 as fulfilling the events of Herod slaughtering the innocent children of Israel around Bethlehem. Jeremiah describes Rachel as hearing the cries of her children being deported into captivity from Ramah, yet Matthew cites this as fulfilling the theme of continued exile for God’s firstborn son. What gives? This type of prophetic "fulfillment" is not ordinary, or is it?

If something doesn't seem right, it may be because we are assuming too much about what it means for prophecy to be "fulfilled." Far too often Christians assume that fulfillment of a prophetic narrative is the same as a prophecy that predicts future events. Or, to put it another way, Christians often fail to distinguish indirect typological fulfillment of prophecy from direct fulfillment of prophecy. "The main difference between direct fulfillment of prophecy and indirect typological fulfillment is that the direct fulfills what was explicitly predicted by the words of the prophet, while the indirect fulfills what was implicitly foreshadowed by historical events, which have been narrated."4 As Craig L. Blomberg has noted,5 Matthew is not interpreting the text of Jeremiah 31:15 as a prediction of future events, but rather is employing a similar kind of typology6 to his interpretation of Hosea 11:1, as seen moments earlier (Matt. 2:15). I wrote about the typology of Hosea 11:1 in the last post (here).

Matthew has very good reasons for employing a typological fulfillment here. In the narrative of Israel’s life, Ramah was, in fact, a place where captives were taken and stationed before their exile to Babylon (Jer. 40:1). Ramah, as Jerome noted, is also the region in which Rachel was buried near Bethlehem (the city in which Herod slaughtered the innocent children). Yet if we go all the way back to the Genesis narrative, there is more to the story of Rachel’s death and burial than what ordinarily meets the fundamentalist eye. It is also significant that Rachel dies while giving birth on the road to Bethlehem, and it’s in the midst of her suffering that her midwife tries comforting her with news that she has another son. After her son is born, she names him Benoni, which means “son of my sorrow,” but Israel renames him Benjamin (“son of my right hand”) as a sign of hope for Israel’s future. In the Genesis narrative, Rachel weeps over her son, yet afterward he becomes Israel’s hope. In Jeremiah's prophecy, Rachel weeps over her children once more, but this time it’s as they’re being exiled to Babylon; and just as Israel renamed her "son of sorrow" into a son of hope, Yahweh speaks words of comfort to Rachel again. This time Yahweh promises that her children will return from exile. Yahweh promises to show mercy toward his rebellious son. He promises to restore their fortunes, replenish their languishing souls, and deliver them from exile. “There is hope for your future, declares Yahweh, and your children shall come back to their own country” (v. 17).

In Matthew's day, Rachel’s weeping is finally filled full. This time her weeping is over the slaughter of the children at Bethlehem. No direct words of comfort are given her in Matthew, but the very next verse speaks of the return of Jesus to the land of Israel after the sure death of Herod (Matt. 2:19-21). Just as it was in Jeremiah's day, Israel’s life in the promised land seems hopeless in the days of Jesus' birth too, yet the hope of redemption and faith in Israel's Redeemer lives on. Even though there was a great slaughter of Rachel’s children in the region where she was buried, a corresponding promise of resurrection was also promised. That resurrection would entail a greater “exodus” than ever before in Israel’s history. That exodus from continued exile is what Jesus was born into the world to accomplish. Jesus came to save His people from bondage. Jesus came to deliver them from exile and inaugurate a new creation in the world. A voice was heard in Ramah, a voice of innocent children being slaughtered by a new Pharaoh. But without a new Pharaoh there would be no Egypt to call his faithful Son out of; and without a faithful Son there would be no Israel to die and rise with Him.