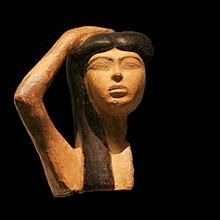 Matthew 9:23 displays a contrast between faithless rabbinical customs and the customs that honor Yahweh. According to rabbinical tradition, flute-playing in the first century was a symbol of mourning. But this is significantly different than the examples found in the old testament. Jeremiah 48:36 is the only old testament passage paralleling moaning with flute-playing, but that passage is actually paralleling the sound of a flute similar to the sound of moaning, and not flute-playing per se. Instead, flute-playing throughout the old testament is more commonly symbolic of celebrating one’s gladness for God’s healing presence (Psalm 5; Isaiah 30:29). Isaiah 5:12 even refers to flute-players while celebrating the feasts of Yahweh. But because Israel plays the flute and does not regard Yahweh’s deeds on their behalf, nor do they see the work of His hands in their midst, Isaiah says that Yahweh parches their thirst, starves their honored men, and sends them into exile (v. 13).

Some people in Israel may put on a good performance with flutes, but Jesus won't dance to their tune because they call evil good and good evil. They put darkness for light and light for darkness, bitter for sweet and sweet for bitter (v. 20). Hypocritical flute-playing in Yahweh’s presence leads to death, whereas the flute-playing of faith is appropriate for celebrating Yahweh’s life-giving presence.