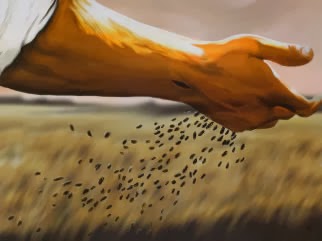 We have finally arrived at the center of Matthew's gospel: chapter thirteen. Chapter thirteen is the third extensive discourse of Matthew's gospel (as seen here and here), and it's most obvious attribute is it's emphasis on parables. It can also be divided into three large sections (as seen here). In the following series of posts on chapter thirteen, I will be using Layout #2 as presented in that post. In this post I will be commenting on the first section of that layout (Matt. 13:1-23; A1, B1, & C1).

In sections A1 & C1 of that layout, Jesus delivers and explains his famous "parable of the sower," and in that parable four types of soil have "seed" sown on them. The typical approach to that parable is to interpret Jesus' words as describing something entirely future. In other words, Christians today often interpret these parables as the time which began with the incarnation of Jesus and will end at the consummation of global human history. However, that will not be my approach to the text. Instead I will be treating the "field" and world of these parables as the field and world in which Israelites lived, scattered throughout the Roman empire of that day, and I will be treating the time-frame of these parables as describing the culmination of the end of the old covenant age. That is to say, instead of describing the entire future history of humanity on earth earth, Jesus instead seems to be describing the last days of the Old Covenant and that present age in which the word of his kingdom could be sown.

Moreover, because the first three types of seed-embedded soil are often presumed by Christians today as describing pagans and "outsiders" of God's covenant family, and there doesn't seem to be any immediate indication of those factors, that also will not be my approach to interpreting these parables in context.

With the first seed sown "beside the road" (v. 4), creatures come and devour them. These could not possibly be covenant members of God's family because they are completely devoured, or so it is believed. With the second seed sown on "rocky places," there is little soil (v. 5). The sun scorches them after growing a little, but they, like those "beside the road," also wither away and die. Again, this seed is believed to be outside of the covenant people of God because they eventually wither away and die. The third seed is also similar, having been sown "among the thorns" (v. 7). That eventually gets choked and withers away. But the fourth seed is different. The fourth seed is a "believing" seed, a covenant-member-seed, which falls on good soil and yields a huge crop. It's a "regenerate" crop. Bottom line: the fourth seed is an "elect" crop and the first three are not, or so it has been treated.

I'm going to suggest an alternative to this. Given the progressing context of Matthew's gospel so far, it seems that all four seeds are sown among God's covenant people, the land and people where the people of Israel dwell as a whole, without further distinction or emphasis (especially not upon "regeneration" or "election"). Surely no honest theologian or historian believes that all of Israel who received God's word in the first century would endure to the end. First century history is abundantly clear that not all of Israel would follow Jesus and His apostles up to the point of old Jerusalem's destruction in 70 A.D.. And that actually helps clarify what the Apostles would expect to see in the last days of the old covenant. They would expect to see vast blessings of faith from sowing the word of Christ's kingdom on earth, but only a remnant of Israel would remain faithful to the end. A new Israel, an Israel of faith whose seed is of Abraham through faith in Christ (Gal. 3) would emerge from the rubble of the old creation. Just because some did not endure to the end does not mean all four seeds could not possibly be describing all of Israel, who all were generally recognized to be the covenant people of God. If Jesus was describing all of Israel, which generally is a description of all of God's covenant people, then the underlying principles of Jesus' parables could apply to the new covenant church as well. Just like Israel of old, the christian church today contains hypocrites and others with faith as frail as soap bubbles. But the only way to find out in time and history if someone is a hypocrite, or just plain weak in faith, or whatever, is if they are first identified among God's covenant people as God's covenant people. And that seems to be the kind of scenario Jesus is describing in his parables. He seems to be describing Israel. He seems to be describing seeds that are scattered across the land of God's covenant people as a whole.

This brings up an important factor worthy of a brief digression. God's people, in time and history, are identified by their inclusion in the covenant, not by their hypocrisy (or lack thereof). Hypocrisy is a measure of one's faithfulness to the covenant, not a boundary marker of the covenant itself. If two people are married and one of them is a hypocrite, i.e. an unfaithful spouse, there is still a covenant between the two. The same is true about God's covenant with Israel. So this parable of the sower should be thought of as describing, not only hypocrites with faith as stable as an upright toothpick, but also enemies of the faith outside the covenant. In Jesus' first century context, the hypocrites would be those of Israel who would follow Jesus for a time, but then revert back to the idolatries of Judaism and it's old covenant temple, priesthood, and sacrificial system. The main point of all this is that unfruitful seed-embedded-soils can be among those identified with God's covenant family.

This explains much of what Jesus was describing when he mentioned "the mystery of the kingdom of heaven" being given to his disciples, but not to the remainder of his audience, which only received parables of the kingdom of heaven (vv. 10-11). The eyes and ears of the apostles are blessed because they see and hear the King and His Kingdom coming. They also have the King of the kingdom of heaven revealing and explaining the mystery of His kingdom to them, but not to others. The unique privilege of having this mystery revealed to them is even more obvious when connected with the previous discourse of Jesus to his disciples in chapter ten. There Jesus revealed to them and commissioned them to go to the lost sheep of the house of Israel preaching that the kingdom of heaven was near (10:5-7), and that judgment upon the house of Israel was near as well (10:16-23). That judgment included the removal of Israel's landed inheritance, or, to speak in terms which Matthew records Jesus as saying,  "for whoever has, to him more shall be given, and he will have an abundance; but whoever does not have, even what he has shall be taken away" (13:10-12).

All of what Jesus was saying about having an losing makes perfect sense in this context of the kingdom coming near along with God's judgment upon unfaithful Israel. Perhaps the connections might be easier to understand if the translation was amplified a bit. By studying B1 together as one unit (13:10-17), it's easier to grasp a summary idea of what Jesus was describing in 13:10-12:

For Jesus, "having" and "taking away" has to do with something near to that generation, which would most clearly refer to Israel's inheritance in the kingdom under the rule of King Jesus. Those who know that the Kingdom is near will strive to enter into it. Those who don't will lose their inheritance. Israel as a whole is addressed, and the word of the kingdom of heaven is scattered among them all, but not all of Israel will endure to the end and inherit the kingdom. At that point when the old covenant creation comes to an end, even what has been given to many Israelites shall be taken away, because knowing Jesus they glorified him not as God, neither were they thankful. Whoever does not follow King Jesus, even what he has shall be taken away by 70 A.D. But the one who follows Jesus to the end, to him more shall be given.

In verse 14, Jesus says that in their case --that is, the case of Israel who would reject the word of the kingdom of heaven preached to them-- "the prophecy of Isaiah is being fulfilled." The word used here by Jesus and translated as "fulfilled" is anapleroutai, which is quite different in its emphasis than other times the word "fulfill" pops up in Matthew's gospel. In Greek, anapleroutai describes the filling-full to the brim of that which is lacking. In brief it means to really fill full. Therefore Jesus, by quoting Isaiah 6:9-10 (cf. Matt. 13:15), was teaching his apostles that the promise of judgment inflicted upon Israel in the days of Isaiah was only a partial outpouring of God's wrath, and if they imagine for one second that God's wrath upon Israel back then (in the days of Isaiah) was great, the outpouring of God's wrath upon the generation of Jesus' apostles would be much greater; and the correlative deliverance for God's people, the new Jerusalem, at that time would be exceedingly great as well. The winepress of God's wrath would press upon old covenant Jerusalem and fill up all seven bowls to the fullest before the new Jerusalem would descend from heaven. This, of course, means that the new Jerusalem is analogous to the kingdom of heaven,1 but I'll save more conversations about that for another post, for another time.


1. Doug Wilson's comments in this regard are particularly insightful and worthy of further reflection. He writes: "The New Jerusalem is not the same thing as heaven, but it necessary to say a few things about it here. This is because much of the imagery we have of heaven comes, not from the biblical descriptions of heaven, but from the descriptions of the New Jerusalem—pearly gates, streets of gold, and so forth. This confusion is perpetuated principally through hymns and cartoons. The New Jerusalem is a biblical metaphor for the Christian church—both on earth and in heaven. This identification is not speculation—it is explicitly made in Scripture." -- Douglas Wilson, The Forgotten Heavens: Six Essays on Cosmology [Moscow, ID: Canon Press; 2010], p. 19