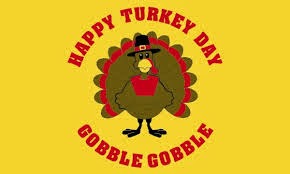 Everyone is preparing for Turkey Day, the great day of "Thanksgiving." But not everyone is thankful. In part this is because not everyone knows what to be thankful for. What's so special about this holiday, some might ask? Why this day, as apposed to some other day? And why should I care? Some don't even go that far, connecting thankfulness with the holiday itself, partly because they've never been taught the historical significance behind the official holiday, but also because the history is meaningless to them anyway. For many American families, the children have been raised their whole life in an environment of unthankfulness and bitterness, so Turkey Day has become just another day to remain consistent with their upbringing. Other than having a day off work with holiday pay, life sucks, so why be thankful? Eat, drink, and be merry about the holiday pay, but let thankfulness to God remain an expendable option. People like this have been raised to be dirty, so the last thing they want is a holiday commemorating their need for a bath, and a house-party full of people expressing their thankfulness to Jesus for soap.

The major problem with unthankful people lies in the human heart. The fact that they don't want to give thanks at all is very telling. At best they just want to be left to themselves, laying quietly in the coffin of their own selfishness. At worst they want to be given thanks. They want attention, but they want most of it, or, at least to be the center of it. They want to be coddled, petted, and admired.

The apostle Paul had a name for people like this. He called them fools. In Romans 1:21 Paul describes the unbelieving, unrighteous landscape of mankind as knowing the living and true God (gnontes ton theon), while choosing to neither honor Him nor give Him thanks. Such thanklessness is foolish. Such thanklessness is also sin. But this is also nothing new to the history of fallen humanity, which is why Thanksgiving Day has transformed into Turkey Day over the last century. Sure, Turkey Day is still a day of feasting and celebration for many people, but many of them are not giving thanks to God, which is what this Thanksgiving holiday was originally about. Fast-forward 200 plus years and "Thanksgiving" has become a celebration and feast to America's god: their belly; their altar: a kitchen table (or couch); their sacrifice: a steaming turkey.

Like Israel of old, people feast in the Lord's courtyard and go through the motions of worship, offering one turkey after another. Burnt offerings are continually before Yahweh, as though that's what He really desires (Psalm 50:8). But there is a remedy for all of this. There is a remedy for all of the foolish, ignorant, selfish, unbelieving festivity which exchanges the truth of God for a lie. That remedy is prescribed by God too, part of which is offered to us in Romans 1, and another part is offered in Psalm 50.

After Paul describes the fool of Romans 1, he concludes with a comment about why God gives such fools over to greater foolishness. It's because "they did not see fit to acknowledge God" (Rom 1:21). In other words, they placed themselves in the seat of judgment, determining Gods worthiness to receive thanks. They determined God's thank-worthiness. Much like Israel of old, God graciously delivered people from bondage and blessed them to the point of maintaining an annual celebration of thanksgiving, rendering unto Him their sincere and humble thanks for His kind care and protection, for His signal and manifold mercies, for the favorable interpositions of His providence, and for the great degree of tranquility, union, and plenty which they had enjoyed and He provided. The great fault of people of all ages --among Israel, those in Paul's day, and even up to our own day-- is that we place ourselves in the throne of God, judging Him to be worthy of our thanks. Far too often we think of God as one of us (Psa. 50:21). This is a sin which the people of this land need to repent of, for even when we give God thanks, if we are the ones remaining in the seat of judgment, seeing if God is fit to receive our expression of thankfulness, we're off at the wrong start.

Another part of the remedy is in Psalm 50. This Psalm is about covenant renewal, and it describes all the people together sacrificing to Yahweh in his courts, very much like people do today across America today on their holy-days ("holidays"). Among many of those who gave thanks to "god," much of it was mere lip-service. God the confronted them, describing their life this way:

You hate discipline. You cast My words behind you. If you see a thief, you're not bothered by him, and the same is true with your company of adulterers too. You give your mouth free reign to speak evil things, and your mouth frames deceit. You sit and speak against your brother. You even slander your own mother's son! You've done all these things while I watched silently. You thought that I was one like yourself. (Psa. 50:17-21)


He then says to them:


The one who offers thanksgiving as his sacrifice glorifies Me. To the one who orders his way rightly I will show the salvation of God.

Earlier in the same Psalm, this was said as well:


Offer to God a sacrifice of thanksgiving and perform your vows to the Most High...

Striving to maintain a day of "Thanksgiving" in a faithless and Godless culture is like trying to shepherd the wind. It's futile and fleeting in a world that is faithless and Godless. And by Godless I mean Christless. What this Christless world needs is true thanksgiving, a giving of self that performs vows, a giving of thanks from one who orders his way rightly. What this world needs is Jesus Christ, who modeled the perfect giving of thanks in a thankless world. Jesus performed every vow faithfully to his Father, and he gave thanks. Jesus ordered his way rightly, and he gave thanks. After ordering his way rightly, and after paying all his vows, Jesus then gives himself as a thank-offering. In contrast with a world whose god is their belly, Jesus emptied himself and took upon himself the form of a servant, humbling himself by becoming obedient to the point of death, even the death of the cross (Phil. 2:7-8). For that reason God highly exalted Jesus and bestowed upon him a name that is above every name, so that at the name of Jesus every knee shall bow, and every tongue confess that Jesus Christ is Lord, to the glory of God the Father. The Church therefore celebrates this thank-offering of Jesus in weekly eucharist, weekly "thanks-giving" (which is what eucharist means in Greek: to give thanks). In turn the weekly eucharist, ordered rightly, prepares the body of Christ to give thanks to God in all times and places, especially in those times and places where a national holiday of thanksgiving to God is commemorated.

So, if you want to give thanks to God this holiday, here's where people should start. Start by remembering that Advent season begins three days after Thanksgiving Day. Continue that thought with humble adoration of the Son of God who lived and died and rose from death to life for you. After that, keep in mind that the Son of God became man to enable men like you to become sons of God. Acknowledge that your Father in Heaven has placed His Son upon the seat of judgment, not you, and be thankful for that. Be thankful that as sons, your Heavenly Father is more willing to give than you are willing to receive. Be thankful that as sons, your Heavenly Father graciously and repeatedly calls you to renew your covenant with Him, so you can perform your vows; so you can order your way rightly before Him. Don't just eat turkey and say 'thanks.' Render unto Him their sincere and humble thanks for His kind care and protection, for His signal and manifold mercies, for the favorable interpositions of His providence, and for the great degree of tranquility, union, and plenty which you have enjoyed--that He provided. These are the things which were publicly acknowledged by George Washington, President of these United States of America, on the first national Thanksgiving celebration, issued October 3rd, 1789. That public address can be read here.

Be thankful for turkey, and be thankful for holiday pay, but prove that thankfulness of yours to Jesus Christ by cleaning up your life, fearing God, paying your vows to Him, and trusting that He is more willing to give than you are to receive. Repent of whatever unwillingness to receive there may be on your part, but then thank Him for His willingness to give even more still. In all your ways acknowledge Him, and He will direct your path.