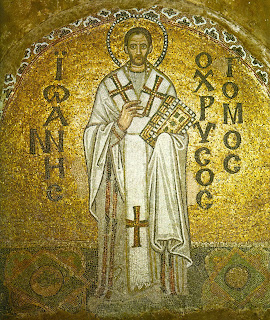 I recently stumbled upon this gem of a quote from St. Chrysostom, commenting on Matthew 13:10-11. It concerns Jesus' enigmatic statement about some disciples receiving "the mystery of the kingdom of heaven" and others being condemned because "seeing, they see not." In this commentary,  Chrysostom balances the free-will/divine-sovereignty dilemma by simply asserting that what is revealed in Scripture is the Christian standard for reasoning, however paradoxical it may seem to finite creatures such as us. Human volition is not contrary to God's sovereign involvement in human affairs, therefore speaking in parables is appropriate for the condemnation of some and the vindication of others. He writes:

What then saith Christ? “Because it is given unto you,” so He speaks, “to know the mysteries of the Kingdom of Heaven, but to them it is not given.” But this He said, not bringing in necessity, or any allotment made causelessly and at random, but implying them to be the authors of all their own evils, and wishing to represent that the thing is a gift, and a grace bestowed from above.


It by no means follows, however, because it is a gift, that therefore free will is taken away; and this is evident from what comes after. To this purpose, in order that neither the one sort may despair, nor the other grow careless, upon being told that “it is given,” He signifies the beginning to be with ourselves.
…Then He also made what He had said more distinct, pointing out the meaning of, “To him that hath, shall be given, but from him that hath not, even that which he seemeth to have, shall be taken away.”
“Therefore,” saith He, “speak I to them in parables; because they seeing see not.”
“It were meet then,” one may say, “to have opened their eyes, if they see not.” Nay, if the blindness were natural, it were meet to open them; but because it was a voluntary and self-chosen blindness, therefore He said not simply, “They see not,” but, “seeing, they see not;” so that the blindness is of their own wickedness. For they saw even devils cast out, and said, “By Beelzebub, prince of the devils, He casteth out the devils.” They heard Him guiding them unto God, and evincing His great unanimity with Him, and they say, “This man is not of God.” Since then the judgment they pronounced was contrary both to their sight and hearing, therefore, saith He, the very hearing do I take away from them. For they derive thence no advantage, but rather greater condemnation. For they not only disbelieved, but found fault also, and accused, and laid snares. However, He saith not this, for it is not His will to give disgust in accusing them. Therefore neither at the beginning did He so discourse to them, but with much plainness; but because they perverted themselves, thenceforth He speaks in parables.1