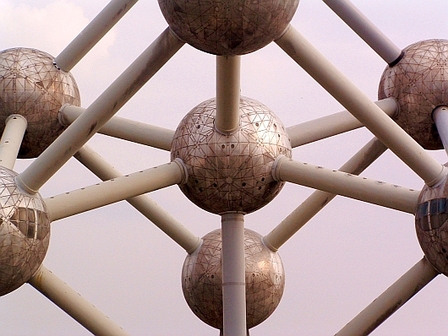 In chapters 8 & 9 of Matthew's gospel, we find a series of ten miracles in a row which, as I have mentioned in an earlier post, frames in a type of "wilderness wandering" motif in the life of Jesus as it once was played out through the life of Israel.  But instead of coming to judge Israel for her ten rebellions, the Lord has come as promised to heal and restore Israel (Matt. 8:17).  Years ago, R. T. France noted carefully that these ten miracles were presented as one "collection," and that there also appears to be a unique placement of each miracle into three distinctive groups when compared with the other two synoptic gospels.  He writes:

The collection consists of nine separate miracle stories comprising ten individual miracles (since one of the stories, 9:18-26, contains two intertwined miracles of healing), which are arranged in three groups of three (8:1-17; 8:23-9:8; 9:18-34).  Between these three groups are two narrative interludes (8:18-22; 9:9-17) each of which focuses on the call to discipleship and the response of a variety of individuals to that call."1

Below is a simple outline of what R.T. France just described:

This information is helpful for us in a few ways.  First, it helps modern readers of Matthew's gospel gain an appreciation for the artistic side of biblical narrative.  The average modern-day reader has no clue that there even is an art of biblical narrative!  Secondarily, it clarifies many misunderstandings surrounding the accusations of "random" or "contradictory" events in Matthew's gospel when compared with the other synoptic gospels.  If Matthew is highlighting true historical events, but he is also writing with different and more ancient literary conventions than what are commonly used today, such accusations and allegations become exposed for what they truly are: false.


Last of all, the details of literary structure help the student of Holy Scripture to focus upon the way in which individual narratives were intentionally knit together by Matthew.  Consider closely the example above.  Instead of merely focusing upon each miracle atomistically (which is probably how many students approach each story in the Bible), each group of three miracles can be viewed atomistically.  What might at first glance appear to be an isolated, atomized miracle can instead be viewed like a proton within an atom.  The remaining two miracles are like the neutron and electron knit together with the proton, thereby comprising one atomic particle.  But this is only one of the building blocks of the larger story.  Each sub-atomic story works harmoniously with other sub-atomic stories, comprising one atomic story, which is only one part of one unit of mass within the larger living story of the Gospel.

Posted by Epexegesis at 10:22 AM
Email ThisBlogThis!Share to TwitterShare to FacebookShare to Pinterest
Labels: Biblical Interpretation, Matthew