O Sing a New Song to the Lord 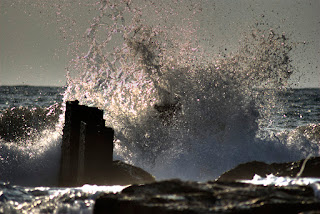 On the second friday of each month, a robust, worship-filled event is hosted for evangelical Christians in southeastern Wisconsin. This event is formally known as a Community Evensong, and is represented by a handful of trinitarian, gospel-preaching, conservative churches that are committed to serving the communities of southeastern Wisconsin. It is hosted in Milwaukee, WI by Crossroads Church of God, a non-denominational church that has deep roots in Milwaukee soil. Every month at the Community Evensong, evangelical christians gather together to learn the Scriptures and to sing what they learn. The reason why I mention all of this is because last month I had the privilege of teaching at the Community Evensong for the first time. The scriptures we learned to sing in parts were from a hymn titled "O Sing a New Song to the Lord", which comes directly from the opening lines of Psalm 98. And so, my job this month was to teach that Psalm.

I didn't mention this in my message that evening, but it wouldn't surprise me if Psalm 98 was overlooked by many christians today, simply because it's a short 9-verse psalm that doesn't look much different than many other Psalms. In fact, it's so short, and so much like other Psalms, that some scholars think the author plagiarized earlier authentic Psalms for the composition of this one. For example, within it's nine short verses, Psalm 98 talks about the Lord doing wonderful things. It talks about the Lord's salvation and faithfulness, as well as His victory and righteousness. It talks about seas roaring and the waves of rivers clapping their hands together, all for the praise of God. But if you have ever read through the Psalms before, you know that you've heard all these themes before. This isn't new information. This isn't unfamiliar imagery. And so why did we bother learning this Psalm and this song for the Community Evensong event, especially if we already know what this Psalm is talking about?  The following is a brief response to that question.

for he has done marvelous things!
His right hand and his holy arm
have worked salvation for him.
2  The Lord has made known his salvation;
he has revealed his righteousness in the sight of the nations.
3  He has remembered his steadfast love and faithfulness
to the house of Israel.
All the ends of the earth have seen
the salvation of our God.
4  Make a joyful noise to the Lord, all the earth;
break forth into joyous song and sing praises!
5  Sing praises to the Lord with the lyre,
with the lyre and the sound of melody!
6  With trumpets and the sound of the horn
make a joyful noise before the King, the Lord!
7  Let the sea roar, and all that fills it;
the world and those who dwell in it!
8  Let the rivers clap their hands;
let the hills sing for joy together
9  before the Lord, for he comes
to judge the earth.
He will judge the world with righteousness,
and the peoples with equity.


In order to appreciate this Psalm, it's important to first notice the way it is balanced. In the verses above, there are three distinctive units (vv. 1-3, 4-6, and 7-9). These three-part units are shown separately because this is the way it's composition would appear if read out loud from the original Hebrew scriptures. This balance of three-part units was intentional on the part of the original Hebrew author. The first unit is comprised of perfect-tense verbs, which, in English grammar, translates into past-tense verbs. In other words, the first unit is encouraging the reader in the present to look to the past and remember the past. The reader is to remember that "the Lord has done wonderful things!" (v. 1). The Lord "has revealed His righteousness in the sight of the nations!" (v. 2).  "The Lord has remembered His steadfast love," the result of which has been that "all nations have seen the salvation of our God." (v. 3).  All the credit of salvation, and even all the hope of God's people, rests upon God's sovereign initiative. And here, God's people are called to look back at God's loyal love to encourage their faithfulness in the present.

The second unit is comprised of imperfect, imperative verbs, which (to oversimplify what that means) is a fancy way of describing what God's people should be doing now in the present. And because this unit is filled with imperatives, it's content shouldn't be viewed as mere suggestions or whispers of advice. The text in Hebrew is actually shouting at us! Unfortunately the ESV has smoothed out the english translation of this section. More literal translations (like the NASB) are typically more helpful for understanding the emphasis of this unit. A more literal rendering of verse 4 would be:  "Shout joyfully to the Lord all the earth!!  Burst forth and sing for joy! And sing praises!"  The last verse of this unit is similarly expressed: "Shout joyfully before the King, the Lord!" This is what God's people are to do when they consider the faithfulness and lovingkindness of the Lord in times past. Our King, the Lord, is worthy of such emphatic praise!

The third unit refers entirely to the future, and this completes the balance for this Psalm. Again, some English translations have smoothed over the future emphasis contained in the original Hebrew. A better translation may be considered as follows:  "Tell the sea to roar and all it contains! Tell the world and all those who dwell in it! Tell the rivers to clap their hands! Tell the mountains to sing together for joy before the Lord! For He is coming to judge the earth. He will judge the world with righteousness, and it's people with equity."  Not only is God worthy of such emphatic praise because He has proven Himself to be faithful and loyally loving to people in covenant with Him; but this passage teaches us that His praiseworthiness ought to be proclaimed from one generation to the next. The future of God's kingdom on earth is a glorious one that cannot be hindered from coming, and because of that expectation in the future, there is no reason to stop making a joyful noise in the present.

Of course, we must also keep in mind that this Psalm was written before the coming of the Messiah. Once the Messiah came, all that was merely anticipated became an inaugurated reality. This is why Jesus, at the inauguration of his public ministry could proclaim, "Repent! For the Kingdom of Heaven is at hand!" (Matt. 3:17).  The gospel is not merely a message of personal salvation.  It is far more than that!  Keep in mind that it was a "gospel of the kingdom" that Jesus proclaimed (Matt. 3:23), and it is that gospel which his disciples proclaimed too. The disciples of Jesus today are to proclaim that gospel as well. And according to Psalm 98, we proclaim the gospel of the kingdom loud and proud in the present for two reasons: First, it's because we know exactly what God's steadfast love and faithfulness has produced in the past. Secondarily, we know that God has promised the advancement and victory of His kingdom on earth throughout the future of redemptive history. These three aspects of our Lord's kingdom -- the past, present, and future -- is what Psalm 98 is all about.  Deo Gratias.

Posted by Epexegesis at 8:57 AM
Email ThisBlogThis!Share to TwitterShare to FacebookShare to Pinterest
Labels: Biblical Interpretation, Liturgy and Life, Psalms