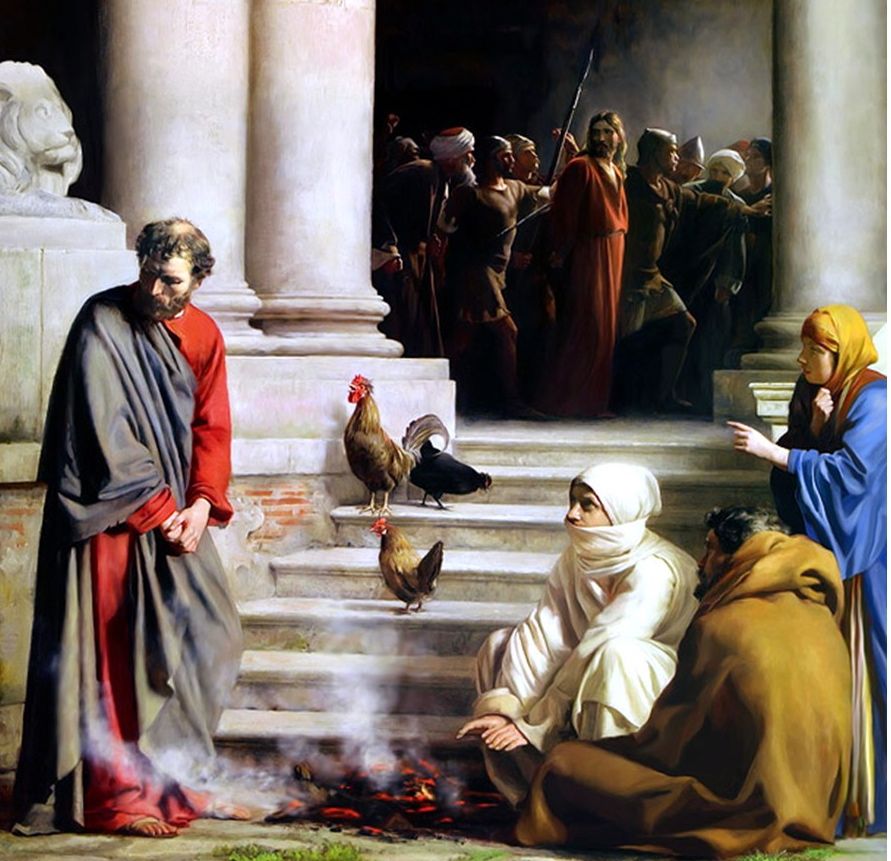 (This post continues where I left off in my recent series on John's gospel, chapters 18 & 19. The previous two posts in this series can be viewed here and here.)

First John tells us that Jesus was led away from the garden to "the courtyard of the high priest" (v. 15). This mention of a "courtyard" is, in itself, a peculiar way of describing where the high priest was located. Courtyards are generally associated with the liturgical boundaries of the tabernacle and temple, not the houses of priests. But in this case, John seems to be alluding to these tabernacle boundaries intentionally, as though Jesus had moved from his arrest in a most-holy garden-sanctuary to it's outer courtyard, where sinners meet with their high priest. It is here in this courtyard of the high priest that we first learn of Peter being barred from entrance therein -- at least his initial attempt to enter in.

Next, John says that a slave-girl was the gatekeeper that night, and she expressed her curiosity of Peter's involvement with the trial of Jesus that night. This is where we find Peter's first emphatic denial of Jesus, expressed in a way that paints him as hiding from his Lord, not merely the enemies of his Lord. This intentional act of hiding is inferred from Peter's response to the gatekeeper's question, asking as he entered, "You also are not one of this man's disciples, are you?" Prior to this question, John had already informed us that he was known to the high priest (v. 15), and so they let him in; and it was him who came back out to tell the gatekeeper to let Peter in also. It is at that time when the gatekeeper asked if Peter is also one of Jesus' disciples. Peter could have said yes, and he still might not have been in any danger by saying so. After all, Peter was with John, and the high priest knew John and welcomed him in; John says so. But as we all know, what Peter says is not yes. Instead, what Peter says is an emphatic no, "I am not!"

Why say no? And why does John record these two emphatic I am not's the way he does, sandwiching Jesus' trial between?
At first glance, this open denial of Jesus seems to have its strategic advantages, and we may want to sympathize with Peter. After all, Peter knows that the rulers of Israel have arrested Jesus because He claims to be the King of Israel. And Peter knows the end result of that arrest isn't going to be pretty. He knows they are going to find some way to try and execute Jesus as a criminal, and he doesn't want to be tried executed along with Jesus. Also, considering the fact that he already mustered up enough courage to strike the high priest's servant with a sword, and he lost that battle because of Jesus' surrender, he's probably not trying to attract too much attention to himself. He just wants to lay low below the radar and see what they do to Jesus. From this perspective, Peter doesn't look as bad as he could. But upon a second glance, we find a different picture.
Sandwiched between Peter's denials, we find Jesus on trial for his life while Peter hides himself, standing and warming himself by a charcoal fire. Inside, Jesus speaks openly and boldly while Peter tries to say as little as possible in the background. But there is more.

Inside, the high priest asks Jesus about his disciples and his teaching, and Jesus responds by pointing out what should be most obvious to everyone in the room: He spoke openly to the world. He always taught in synagogues and in the temple, where all the Jews assemble together. Nothing he said was in secret either. So why is the high priest asking Jesus about his own teaching? If he's on trial for something criminal, the high priest should ask other witnesses whom Jesus has spoken to. That is what God's Law requires, after all. In fact, Jesus' disciples should have been brought in as chief witnesses. Perhaps even Peter should have volunteered to speak in defense of Jesus. Perhaps. Interestingly, it is at this point that one of the officers standing by struck Jesus with his hand because of Jesus' seemingly brass response (v. 22). Like Peter in the garden, this officer is bold to strike whom he perceives to be an enemy of God. But Jesus remains faithful in the face of adversity. Jesus responds again by appealing to God's Law and its requirement to bear true witness about His wrongdoing (v. 23). But there is more.

By recording these events this way, John is painting a vivid picture: Inside, Jesus repeatedly speaks out against the false witnesses against him, while Peter's lips are sealed in the background. Inside, the one who has the words of eternal life speaks openly and boldly against the unlawful violence inflicted upon him, while Peter stands and warms himself by a charcoal fire alongside officers of Israel. But there is more.

Immediately after Jesus' response, saying "If what I said is right, why do you strike me?" (v. 23), we are reminded a second time that "Simon Peter was standing and warming himself" (v. 25). This repetition of details is no mere coincidence. John wants us to interpret what is happening to Jesus in light of what Peter is doing nearby. It is while Peter stands there that some officers nearby ask him the same question as the gatekeeper, which means this is another chance for Peter to redeem himself by answering yes. But unfortunately, he denied it and said again, "I am not." Immediately after this, the final fall of Peter comes to fruition. A relative of Malchus who also was a participant in the arrest of Jesus in the garden, asks Peter, "Did I not see you in the garden with him?" At that moment Peter denied Jesus' Lordship for a third time, and the rooster crowed, just as Jesus had prophesied (13:36-38). But there is more.
The overtones from this trinity of denial alongside a charcoal fire reverberate unto the end of John's gospel where we find the second and only other time this "charcoal fire" (anthrakia) is mentioned in all of Scripture. In John 21:9, the resurrected Jesus sits down with Peter next to a charcoal fire (anthrakia) and asks him one question three times: "Simon, son of John, do you love me?" By asking Peter this question three times by a charcoal fire, Jesus wasn't condemning him or reminding him that some strange form of poetic justice awaited him. Instead, Jesus' choice of words was designed to redeem him. Jesus wasn't challenging Peter's love and faithfulness by the charcoal fire; He was instructing Peter in how to love and serve His sheep more faithfully and boldly in the future. These three questions aren't the only words of Jesus by that charcoal fire. After these instructions, Jesus also prophesied about the kind of death Peter would suffer to glorify God (21:15-19). Just as surely as the rooster crowed according to the word of the Lord, this prophecy of Jesus was a sure sign that Peter would need to prepare to suffer as a faithful witness for the name of Jesus. From that time forward, Peter knew he would have to go where Jesus ultimately went (13:36-38), but because Jesus already went before him and was raised from death to life, his heart wouldn't need to be troubled. Where he would ultimately go is his heavenly Father's house, where Jesus had already prepared a place for him (14:1-4). But there is more.
In this brief narrative (John 18:13-27) we don't just learn something about Peter and his fall into sin. We also learn something about Adam and the whole human race united with him. The story of mankind after Adam's fall in the garden is a story about misunderstanding the Son of God and His voluntary surrender to death so that the world united to His resurrected life could live again. Just as Peter attempted to hide himself from the Lord, the whole world stands guilty of doing the same. Just as Peter told Jesus he would lay down his life for Jesus, but couldn't even admit to being his disciple when surrounded by enemies, so all those who remain united to Adam follow that same path to their own destruction. The world is filled with half-hearted people who say they would follow God wherever He leads, but would much rather stand cozy by a fire warming themselves from the cold instead of entering the heat of battle. But the good news of John 18:13-27 is that Jesus came into this fallen world and took upon Himself human nature in order to deliver even those who stumble and fall, over and over again, like Peter. It is because Jesus has overcome all temptation for us, and even faced death for us, and having been raised from death to life for us, that we know who we can go to right now for strength to overcome the next temptation. We know who we can go to now for courage to overcome the next temptation. We know to whom we can go to give us peace of mind as we endure those trials and overcome those temptations. But there is more.