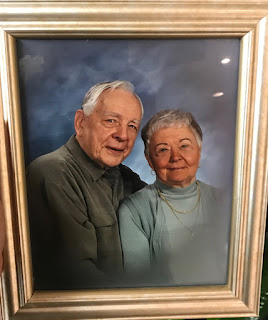 Below is a very brief speech I gave at my Grandmother's recent funeral service during the time when family and friends went up to the podium to offer any remembrances they had of Wilma:


I want to share with you a few things about Wilma that left a huge impression upon my life. (And for those of you who don't know, I am Wilma and Cyril's second oldest grandson.)

The first thing about Wilma that I remember is that she radiated generosity, thoughtfulness, loyalty, and love--so much so, in fact, that as I reflected upon the last few days since hearing about Wilma falling asleep in the Lord, it dawned on me just how difficult all people are to love. In general, I think all people are difficult to love. I am difficult to love. All of us here, and also those in this wide world around us, are difficult to love. And Wilma was no perfect exception to that rule. Nonetheless, because of Wilma's generosity, thoughtfulness, loyalty, and love--virtues which all of us here know were characteristic of her--she was that rare someone who I found difficult to not love. In 35 years of knowing the real and raw person of Wilma, her virtues vastly outshined what makes ordinary people difficult to love.

In all these years I have had many memories with Wilma, from conversations in person and many phone calls, to lots of hand-written cards mailed to my doorstep. (Those of you who ever received a card from her know that she would always personally address the recipient, and never forget to include a passage or two or three from the Scriptures to meditate upon, even as she had done while writing the card.) Again, as I was reflecting this week, I realized that it is really common to think of people you spend a lot of time with as "good" people. As memories are shared and piled up together over time with particular people you enjoy, it's common to think of them as good people. But you know you have found a rare gem when you can look back and identify someone as wise. And from my perspective, Wilma is one of them. It was as though proverbial Wisdom flowed through her veins. The wisdom of God's word was so obviously dear to her that in every single encounter with her that I can remember, I can't honestly describe them as being merely with a good person. Wilma was far more than good. She had what James describes as the "wisdom from above." And that seems, at least to me, to be an increasingly rare description of how people are remembered in these days.

This brings me to another aspect in which Wilma left a significant impression: God's handwriting was written large through her life. The apostle Paul mentions that Christians ought to be living epistles read by all men. I have known a lot of Christians throughout my life, and, sadly, I am not very comfortable describing the majority of them as living epistles. At best, most of whom I know are living chapters or verses. Not Wilma though. She was living epistles (plural). She made room for God to speak into every area of her life. And she listened. She seriously considered it, wrestling with it and submitting to it.

Equally beautiful was her willingness to make room for others as well. Through her life, countless numbers of people were invited to taste and see how good the Lord is. Through her thoughtfulness, generosity, loyalty, and love, people came to know God. By imbibing and indwelling the wise life--and not merely the good life--countless people who encountered her encountered true life in Christ. God's handwriting was indeed written large through her life.

Finally, I just want to share with you all that, in my eyes, Wilma was a Saint. By God's grace, she was a saint. Little did I know, as a small child, that I sat on the lap of a Saint. Books were read to me by a Saint. Hand-written letters and birthday cards were written to me by a Saint. Grocery shopping, car riding, movie watching, church gathering, meal preparing, and perhaps most memorable of all--holiday feasting--were all shared with a Saint. And as I like to think about all the Saints who I know for certain are with the Lord in glory, I can confidently share with us all that because of her beautiful and faithful life lived in Christ, Wilma is feasting at a better table now. Thanks be to God.


Posted by Epexegesis at 5:47 AM
Email ThisBlogThis!Share to TwitterShare to FacebookShare to Pinterest
Labels: Epexegesis, Miscellanea