God Tests Everyone (A Homily for the 3rd Sunday in Lent, Year C) 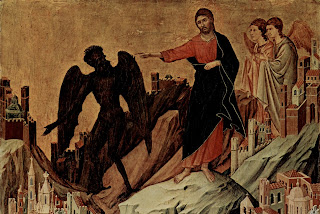 In a school setting there are different kinds of tests which teachers give their students. Some are written tests were you can answer one of multiple choices, while others are completed in the form of an essay or summary. Tests can also be in the form of activities, like in gym class where you're tested to perform the drills over and over again. In all of these examples, the purpose and goal is not (or shouldn't be, anyway) merely to evaluate who is getting the highest test scores, or even building up the most stamina. Rather, those tests are (or should be) for the maturity and development of the student body.

In the passage today from Paul's letter to the Corinthians, we are reminded that God tests us. Paul says that "We must not put Christ to the test (ἐκπειράζωμεν), as some of them did test (ἐπείρασαν)", and also, "These things happened to them to serve as an example, and they were written down to instruct us." In other words, the previous examples of God testing Israel are on our exams too, so we would be wise to keep them in mind when we are being tested.

Paul continues: "So if you think you are standing, watch out that you do not fall. No testing (πειρασθῆναι) has overtaken you that is not common to everyone."

God tests everyone. Testing is common to everyone, according to Paul. But this isn't a unique idea of Paul's. It is an overwhelming theme of the Bible. In the wilderness God tested his people:

Then the LORD said to Moses, "Behold, I am about to rain bread from heaven for you, and the people shall go out and gather a day's portion every day, that I may test (πειράσω) them, whether they will walk in my law or not. (Exodus 20:20 LXX)

Moses said to the people, "Do not fear, for God has come to test (πειράσαι) you, that the fear of him may be before you, that you may not sin." (Exodus 16:4 LXX)

And the people grumbled against Moses, saying, “What shall we drink?” And he cried to the Lord, and the Lord showed him a log, and he threw it into the water, and the water became sweet.There the Lord made for them a statute and a rule, and there he tested (ἐπείρασεν) them (Exodus 15:24-25 LXX)

Take care lest you forget the LORD your God ...when you have eaten and are full and have built good houses and live in them,and when your herds and flocks multiply and your silver and gold is multiplied and all that you have is multiplied, then your heart be lifted up, and you forget the LORD your God, ...who led you through the great and terrifying wilderness... and thirsty ground where there was no water, who brought you water out of the flinty rock, who fed you in the wilderness with manna that your fathers did not know, that he might humble you and test (ἐκπειράσῃ) you, to do you good in the end. (Deuteronomy 8:11-18 LXX)

God even tests his people individually: In Eden God tested Adam. He tested Cain and Abel and others too. One of the most memorable tests of Scripture which God ever gave was to Abraham:

After these things God tested (ἐπείραζεν) Abraham and said to him, "Abraham!" And he said, "Here I am." The Lord said, "Take your son, your only son Isaac, whom you love, and go to the land of Moriah, and offer him there as a burnt offering on one of the mountains of which I shall tell you." (Genesis 22:1-2 LXX)

How would you like that to be your test?

Even toward the end of Israel’s history as a nation, in second Chronicles 32:30-31 (LXX), we see another test, and that test also alludes back to the principles we just learned in Deuteronomy 8:11-18 (above) about tests through times of prosperity:

And Hezekiah prospered in all his works. And so in the matter of the princes of Babylon, who had been sent to him to inquire about the sign that had been done in the land, God left him to himself, in order to test (πειράσαι) him and to know all that was in his heart.

There are numerous other passages I could reference, but I think these few illustrate my point. God tests us, and yet, interestingly, in the background of all those passages, God isn't the only one testing us. God's adversary, the devil, and our earthly adversaries take advantage of God's tests, to test us also. Writing to the Bishop of the church in Smyrna, Jesus offers these promises:

I know your tribulation and your poverty and the slander of those who say that they are Jews and are not, but are a synagogue of Satan. Do not fear what you are about to suffer. Behold, the devil is about to throw some of you into prison, that you may be tested (πειρασθῆτε), and for ten days you will have tribulation. Be faithful unto death, and I will give you the crown of life. (Revelation 2:9-10)

Whenever we examine Scripture’s examples of testing, whether those examples are about God testing us or being tested by evil, we are always tested in one common aspect of our lives: our loyalty to God.

I find it interesting that in our lectionary reading from Corinthians, not only are we taught to expect tests, but in all of the examples Paul gives us about how not to respond to those tests, he mentions the people putting God to the test. In other words, when Paul teaches us about the tests of life, he wants to know what our response will be: Will our response be loyal love toward God, or will we side with evil against God? Will we put Him to the test?

One of the most striking examples of testing in the New Testament is with Jesus right after his baptism, where he goes into the wilderness and is confronted by Satan. There, at the very heart of Satan’s test, Jesus is challenged to question his loyalty to God. As we know, Jesus passed the devil's test. However, at the very beginning of that story we are told that it is the Spirit who lead Jesus into the wilderness for testing (Matt. 4:1). Not only did the adversary test Jesus, but God tested His own Son too, according to that story. God tests us and our adversaries test us. It is very possible for God’s adversaries and ours to take advantage of those circumstances—those tests from God--to test our loyalty to God.

And as we were reminded by Paul, there is no testing of man which is uncommon. Testing is common to us all. If you think your situation of testing is unique, think again. Even Jesus “had been tested (πεπειρασμένον) in every respect as we are”, yet he endured it all without sin (Hebrews 4:15). It is for that very reason we ought to follow the example of Jesus and pray as He instructed us: "Heavenly Father, lead us not into testing (πειρασμόν) but deliver us from the evil one (τοῦ πονηροῦ)." (Matt. 6:13)

After studying the Lord’s Prayer in detail years ago, and offering some thoughts about it, I concluded that the best translation for Matt. 6:13 was “testing,” not “temptation.” The reasons being, first, that by implication, the phrase “Lead us not into temptation” carries the baggage of God tempting us—even tempting us with evil--which He never does, for He can never be tempted to do evil Himself (James 1:13). Secondarily, and as I have already noted, God does lead us into testing, and because the same word for “temptation” (πειρασμός) used in Matt. 6:13 more often means “testing” throughout Scripture, and also is not a contradiction with James 1:13, that seems to be the only reasonable translation. And with that translation of "testing" comes an important lesson about Christian maturity and development, as any loving teacher should want a student to receive. If translated as “testing,” it turns out that Matt. 6:13 is not about deliverance from God ever testing us to mature and develop in life. It's not a request for God to cancel our tests altogether. Rather, the petition, "Lead us not into testing, but deliver us from the evil one" is a description of abandonment—to not be abandoned to go our own way or to fall by evil. Even the surrounding context of the Lord’s Prayer sheds light on that meaning.

Immediately before the Lord’s Prayer on the Mount, where do we find Jesus being tested in his loyalty to God? In the wilderness (Matt. 4:1). The geographical description could not be more obvious for those familiar with the exodus typology utilized throughout Scripture. It is in the wilderness with God that the evil one tested Israel. He tested Jesus also; and it is there where the evil one tests us too. The Lord's prayer is for the new Israel, the Church, who desperately needs deliverance from the evil one if left to our own ways in the wilderness of life.

Therefore, when we pray as Jesus taught us to pray, that portion about God not leading us into testing is not a request to never be tested, but an acknowledgment of our vulnerability before Him in the wilderness of life. We are the ones who, when tested, are free to side with evil and even respond by testing Him back, by grumbling, complaining, and by not seeking deliverance from Him. So Paul says, don't do that! Instead, pray to your Heavenly Father who alone can give us courage through trials and also will deliver us when we turn to Him. The Lord's Prayer is for God's mercy to spare us from testing that we cannot handle. "For to Him belongs the kingdom and the power and the glory, now and forever."

To Him belongs the power and glory…so seek Him while He is near.

Paul tells us that God is faithful through every test we endure, and He will not let you be tested beyond your ability. With the testing he will also provide the way of escape, that you may be able to endure it. That’s God’s promise to you. God never puts you in a situation where you must sin. He always gives you the freedom to side with Him. So remain loyal to Him through all the tests of life.

In the name of the Father, Son, and Holy Spirit. Amen.


Almighty God, you know that we have no power in ourselves to help ourselves: Keep us both outwardly in our bodies and inwardly in our souls, that we may be defended from all adversities which may happen to the body, and from all evil thoughts which may assault and hurt the soul; through Jesus Christ our Lord, who lives and reigns with you and the Holy Spirit, one God, for ever and ever. Amen.