As the title suggests, this is part two of a series on Psalm 34. My thoughts continue from a previous post, starting at verse 8.

8. O taste and see that Yahweh is good; happy are those who take refuge in Him.
9. O fear Yahweh, you His holy ones, for those who fear him have no want.
10. The young lions suffer want and hunger, but those who seek Yahweh lack no good thing.
11. Come, O children, listen to me; I will teach you the fear of Yahweh.
12. Which of you desires life, and covets many days to enjoy good?
13. Keep your tongue from evil and your lips from speaking deceit.
14. Depart from evil, and do good; seek peace, and pursue it.
15. The eyes of Yahweh are on the righteous, and His ears are open to their cry.
16. The face of Yahweh is against evildoers, to cut off the remembrance of them from the land.


This section also seems to stand out on its own within the Psalm, being entirely proverbial and didactic in its presentation, unlike the first seven verses. Interestingly, verses 17 through 22 mirror much of the first section's themes, so I suspect that because verses 8-16 are central to the structure of the Psalm, they might also be of central importance for understanding David's theology of praise.

The opening words of this section are interesting. "Taste and see" Yahweh's goodness, David says. Much can be said about experiencing God's goodness in such practical ways as tasting and seeing, but this phrase especially reminds me of Israelites literally tasting and seeing Yahweh's goodness (although, admittedly, there are other ways of viewing such metaphors). This reminds me of Israelites tasting the peace offerings and seeing the ministry of God's servants within the courtyard of His House. There, in the midst of Israel, the people of Israel could flee for refuge and literally taste and see Yahweh's goodness. If such a regular and personal encounter with God in His Tabernacle is in the background of David's metaphor, this adds another dimension to the Psalm.

David wrote this Psalm with the events of Achish in mind, yet David was not in Moses' tabernacle at that time (David is describing past events which took place in a Philistine territory named Gath), nor was Moses' tabernacle a central place of worship after David returned to Israel with the Ark. As David reminisces upon that past, his theology of drawing near to God is apparently not limited to a physical building or sanctuary. There in the city of Gath David "took refuge" in Yahweh himself as though the physical, earthly tabernacle was symbolic of a much more real place. Refuge could be found in that tabernacle--the true tabernacle where Yahweh dwells--regardless of the physical, earthly structure's condition (which was in disrepair since the Philistines took the Ark).

David also makes some remarkable promises in this Psalm. David says that "those who fear him have no want," and "those who seek Yahweh lack no good thing." He also says that "The eyes of Yahweh are on the righteous, and His ears are open to their cry... [but] The face of Yahweh is against evildoers...." To be sure, I think it's important to receive great comfort and assurance from passages such as these; however, I suspect that many people who read these passages overlook David's point. Many people might skip over what David meant by "fearing" Yahweh and merely find comfort by applying such promises to those who are "righteous" and who "seek" Him. In other words, it might be a mistaken presumption to pair together those who "seek" God with those who are constituted "righteous" (likewise, those who are constituted "righteous" might be mistaken for those who "seek" God). But it seems to me that, in this context, fearing Yahweh and seeking Yahweh go hand in hand just as much, especially if one is to receive personal comfort and assurance that is not in vain. Notice the qualification David himself provides about those whose cries are actually heard and accepted by Yahweh (and not just prayed at Yahweh, and rejected by Him): those people are seen by God as "righteous," and such "righteousness" is not at all described as "imputation" of a legal verdict (as those in Reformed theological circles might suggest). Those who are "righteous" are those who fear (not just those who seek) Yahweh.

What then does it mean to fear Yahweh? 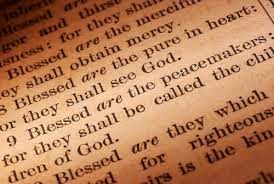 David goes on to explain this in the following verses. David says he will teach what the fear of Yahweh looks like. He begins by asking the question, "Which of you desires life, and covets many days to enjoy good?" This is obviously a rhetorical question designed to teach what the fear of Yahweh is supposed to look like. Everyone wants to enjoy life, and the whole notion of enjoying peace, freedom, security, and the other good blessings of life are coveted by all people. Such were the particular promises given to Israel too. If they loved and obeyed Yahweh, His covenant blessings, such as "many good days" to enjoy, would attend their life. But David follows through with this additional note of clarification:

"[Then] keep your tongue from evil and your lips from speaking deceit. Depart from evil, and do good; seek peace, and pursue it."

Here the "fear" of Yahweh looks like something particular, something Godly. Fearing Yahweh means desiring the life He wants us to live, the life which keeps its speech away from evil and deceit, and pursues good, seeking peace (presumably in both word and action). Fearing Yahweh means respecting God's desire for our lives, and respecting His authority over our lives. If He loves us, He will chasten us for our sins of speaking evil and deceit, the kind of hateful and foolish behavior which harms our neighbor's reputation and livelihood. The eyes and ears of Yahweh are on the righteous because the righteous are fearing Yahweh in these ways. Those who seek Yahweh lack no good thing because because they are seen by Yahweh as those who fear Him, those who seek peace and pursue it because they know that pleases Him, and they also know that life under his love is a life of many good days. But the face of Yahweh is against those who devise evil in their heart, those who speak deceit and promote evil; those who sow seeds of strife and cultivate enmity.

Jesus even endorses the kind of ethos which David seems to be describing in this Psalm. Again, Jesus said "first be reconciled to your brother, and then come and offer your gift (to God). Come to terms quickly with your accuser while you are going with him to court, lest your accuser hand you over to the judge...". In other words, fear God. Seek peace and pursue it. Depart from evil and do good. If you are angry with your brother without a just cause, yet you are pleading to God for deliverance from trials and afflictions, don't be surprised if your cries to Yahweh for deliverance are not heard. Learn that God sets his face against evildoers; so don't pursue evil; flee from it. Don't sow presumptuous seeds of strife, and don't use your knowledge of God's commandments (i.e. "Thou shalt not murder") as an excuse to sow discord among brethren, even if your brother appears to be guilty of a lawless deed (like rumors of murder). You should seek peace and pursue it. As saint Paul says in Romans 12:18, "so far as it depends on you, live peaceably with all people."