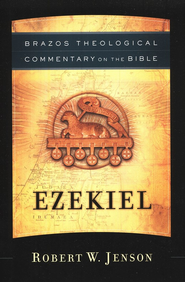 Commenting on Ezekiel 5:5-17, Robert Jenson challenges a dominant Christian prejudice pertaining to the limitations of God’s sovereignty over the affairs of men. He writes:

Is an immanent connection between Jerusalem’s sin and her coming disaster compatible with the proclamation that the Lord himself takes the field to punish her?
Jerusalem is punished by inevitable consequences of sin and is punished by God in person. These are compatible on one condition: if the statutes and ordinances that make the moral order do not obtain independently of God (as often in other religions) or do not function merely as a mediation of divine order from afar (as in yet other systems) but simply are the Lord’s own willing and acting among his creatures.
The supposition that God can be wrathful when rebelled against, and even jealous of his people’s love, further offends our prejudices. We may try to escape by the popular supposition that God in the Old Testament could be wrathful and that the New Testament changes all that. But this notion cannot survive the slightest acquaintance with the texts. Paul is not outdone by Ezekiel: “For the wrath of God is revealed from heaven against all ungodliness and wickedness” (Rom. 1:18), which he latter catalogues in truly wrathful detail. And for depictions of divinely ordained destruction of the wicked, the New Testament book of Revelation tops all competition.
Modernity expected God to be disinterested; and if a judge, then a disinterested judge, on the model of one behind the bench of a British or American courtroom. But the biblical God is precisely not disinterested; his boundless personal investment in his creatures is his most determining characteristic. His law is not something he devises and administers, it is his active personal will, which thus defines also who and what he himself is. And therefore when it is flouted he must be personally offended. He is a lover and therefore jealous, for there cannot be an actual lover who is not jealous—the great climax of the Song of Songs, “love is strong as death, jealously fierce as the grave,” strictly and knowingly parallels love and jealousy. Christian theology dare not retreat a step from these claims, for as the gospel construes our situation, our only hope is God’s personal stake in the good he wills for us.
How we are to work out the metaphysics is another matter. In the dominant inherited tradition, deity is defined by a set of characteristics—many beginning with “omni”—that add up to an immunity to temporal created events. But if God can in history be moved to wrath by our deeds, and if his wrath can then be “satisfied” by his acts in time, he cannot be timeless or changeless in any naïve sense of these notions. …We must indeed think that God remains himself, come what may in his history with us, but this cannot be because he is unaffected by us or because time is meaningless for him.1

Posted by Epexegesis at 8:20 AM
Email ThisBlogThis!Share to TwitterShare to FacebookShare to Pinterest
Labels: Covenant Theology, Epexegesis, Ezekiel