The Gate Liturgy of Eden 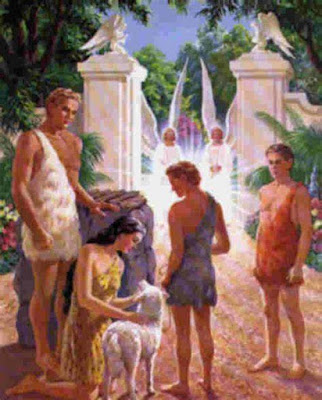 In The Tabernacle Pre-Figured: Cosmic Mountain Ideology in Genesis and Exodus, L. Michael Morales presents a fascinating (and practical) case in defense of what he calls "gate liturgy," particularly in the relationship between the old covenant tabernacle/temple gate liturgy and that which pertains to entering the Garden of Eden, as recorded in Genesis 1-3. Commenting on this in some length, Morales writes:

YHWH God's expulsion of the primal couple and his placing the cherubim and flaiming sword to guard the garden's (gate) entrance become particularly poignant apologies for the necessity of the tabernacle/temple cultus. If it may justly be said that Exodus, Leviticus, Numbers, and Deuteronomy all focus to some degree on the way of approaching God through the worship of the tabernacle, then the expulsion from the divine Presence in the garden sanctuary becomes a manifest "key" to understanding the Pentateuch as well as the tabernacle cultus. The association, already developed but relevant here, between the garden and the tabernacle/temple was recognized by the Jewish sages as evident in the midrash that states when YHWH drove out Adam "from the garden of Eden he revealed to him the destruction of the temple" (Bereshit Rabbah 21.8). The Hebrew Bible itself appears to draw a parallel when, with Hosea 9.15 as an example, similar language is used for the exile of Israel:

This idea is only strengthened, further, if Joaquim Azevedo's reading of Genesis 4.7, whereby he concludes that Adam's children brought their sacrifices to the gate of Eden, is accepted. Without rehearsing his argument, based on grammatical and syntactical considerations, contextual and background analysis, he posits an understanding of Gen 4.7 as: "If you do not do what is right, fix it with the sacrificial offering lying at the doorway of Paradise, then his [Abel's] desire will be to you and you will rule over him again."1 Davidson appears to take a similar reading when he writes:

After Adam and Eve are expelled, in their sinful state they are no longer able to meet with God face to face in the Garden. But...the Gate of the Garden becomes the Sanctuary where Adam and Eve and their descendants were to meet with God, worship Him, and bring their sacrifices. Here the Shekinah glory was manifested as God came down to hold communion with them.2

To be sure, it can hardly be insignificant that Gen 4.7 presents the first usage of the thematically rich term "door" (פתח  petah), and in relation to sacrifice. Eden's entrance (3.24) is not only a reasonable referent for the door in 4.7, but the cherubim mentioned in 3.24 also correspond, in a cultic setting, "to the apprehension of the shrine as a door to heaven."3 Indeed, stationed cherubim, at an eastward entrance--what else can this be but a temple gate? An ancient reading of Gen 3.24 may have recognized, then, not only a threatening barrier to garden entry, but a cultic site, the place where YHWH, in the consuming theophany of his fiery Presence, was "enthroned on the cherubim" (ישׁב  ה‍כרובים yoseb hakkrubim  Ps 80.2; 99.1). In the tabernacle cultus, which likely serves as a conceptual backdrop to the narrative, the door of the tent served as the place to which the people came to present their offerings to YHWH (Exod 40.29; cf. Lev. 1.3; 4.7; 18). The cultic material of the Pentateuch, in other words, demonstrates a concern that sacrificial ritual takes place "before YHWH" (לִפְנֵי יְהוָה  lipne yhwh) or "at the door of the tent of meeting," making the garden entrance the likely place of sacrifice since the previous narrative has already marked Eden as the locus of divine Presence, not to mention that most occurrences of the phrase "before YHWH" have a sanctuary or shrine clearly in mind. Thus not only does the conception of paradise as sanctuary already involve its being a place for cultic sacrifice, but also that the ritual is being performed before the divine Presence.4

Posted by Epexegesis at 7:53 AM
Email ThisBlogThis!Share to TwitterShare to FacebookShare to Pinterest