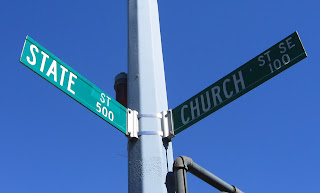 There was a clear separation of "church" and "state" in the Mosaic covenant. Only the family of Aaron could serve as priests in the Tabernacle, and only the tribe of Levi could assist them. This meant that no officer of the state could be an officer of the church, and separated the two institutions definitively (cf. 2 Chronicles 26: 16-19). The law distinguished between civil punishments on the one hand, and ecclesiastical ones, such as "cutting off from the people," or excommunication, on the other.1

Some have argued that "cutting off" is the same as execution, but this is impossible. Leviticus 18:29 states that all the abominations of Leviticus 18 are punished by "cutting off," but in Leviticus 20, these same crimes are discussed, with a variety of punishments. Only a few are capital offenses. Clearly then, "cutting off" does not mean execution. ...["Cutting off"] implies that God will deal with the sinner --God will cut him off-- but since the officers of the Church know that God has set His face against that person, excommunication [i.e. "cutting off"] must be the church's response. Thus, "cutting off" implies ecclesiastical censure.2


1.  James B. Jordan, Through New Eyes: Developing a Biblical View of the World [Eugene, OR: Wipf and Stock Publishers; 1999] p. 202
2.  Ibid. fn. 7
Posted by Epexegesis at 9:14 AM
Email ThisBlogThis!Share to TwitterShare to FacebookShare to Pinterest
Labels: Biblical Interpretation, Ethics, Torah