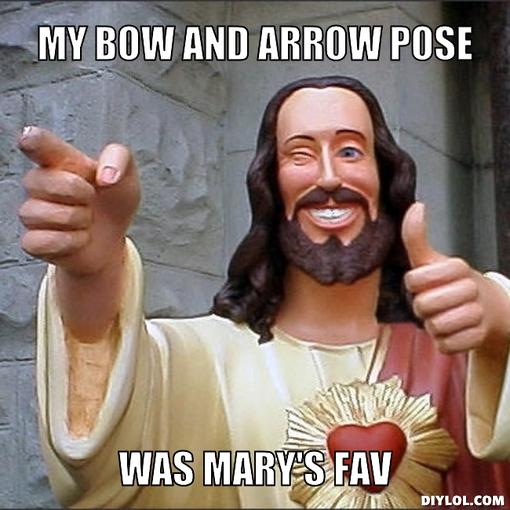 As I was preparing to teach on Matthew 9:9-17, I ran across a small portion of this passage in an ancient manuscript formally known as the "Gospel of Thomas."  Nowadays the Gospel of Thomas is generally associated with the mystical pseuo-christian religion of gnosticism, but can still be found in many bookstores on the shelves labeled "Christian literature." And as far as I can tell, even though gnosticism never really considered itself to be an officially "Christian" movement anyway, and it actually seems to have grown from the roots of first century mystical Judaism instead, many religious people still consider the Gospel of Thomas as one of the "lost scriptures" that never found it's way into the official canon of Christian "Scripture." But now that we have it, lo and behold, Christians are finally able to understand the gospel message correctly. Or, at least that's what some of those "coexist" web-sites are currently advocating.

Now, for those who know me really well, it won't be a big surprise to find out that I think this "gospel" of Thomas is really, really great. It is a great combination of historical fiction and pseudo-wisdom that's entertaining from beginning to end, kind of like the Apocryphal tale of "Bel and the Dragon." (Go ahead, read that one too. The best part is when Daniel kills the dragon. You'll see what I mean.)  The Gospel of Thomas clearly pretends to be portraying the wisdom of Jesus, even as Bel and the Dragon was with Daniel, but really, it's just another corny piece of religious-fiction. And the portion of wisdom taken straight from the parable within Matthew 9:16-17 and Luke 5:36-39 is a really good illustration of how consistently silly this pseudo-gospel really is. And so, because I thought it was worth sharing, I've included an extract from it. Hopefully I'm not the only one in the world who laughs after reading this:

Jesus said: It is not possible for a man to ride two horses or stretch two bows; and it is not possible for a servant to serve two masters, unless he honors the one and insults the other. No one drinks old wine and immediately desires to drink new wine. And new wine is not poured into old wineskins, lest they burst; nor is old wine poured into a new wineskin, lest it spoil. An old patch is not sewn on a new garment, for a rent would result.1

Now, after reading this again, here's what I'm thinking: Old wine can definitely be poured into a new wineskin, old patches can indeed be sewn on new, unshrunk garments, and as far as we know, Jesus probably could ride two horses and stretch two bows. I mean, come on! Let's be serious! We're talking about the guy who walked on water and then multiplied thousands of loaves of bread. I think we could give him a lot more credit than this. He could probably even stretch two bows while riding two horses at the same time. Everybody familiar with the Bible knows that Zorro probably copied his horseback riding skills from Jesus. And so, this pseudo-Thomas guy isn't really impressing me with his wisdom.

But on a more serious note, some scholars have suggested that the reason why the "old wineskins" and "old patches" have been inverted in their meaning is because the references of "old" and "new" from Jesus' original parable have been allegorized and extrapolated to represent the "old" religion of Judaism, leaving the "new" to represent the spirit-filled movement of gnosticism. Admittedly, this is only an educated guess, and it's an interesting one too; but it goes to show that allegorization was not necessarily intended by every parable spoken by Jesus, any more than his alleged statement about horseback riding and bow hunting. As I explained in a previous post, there is a good reason why not to allegorize the "old" and "new" in the Matthew 9:9-17.

Posted by Epexegesis at 6:23 AM
Email ThisBlogThis!Share to TwitterShare to FacebookShare to Pinterest
Labels: Biblical Interpretation, Matthew