Fathers, may I have your attention? 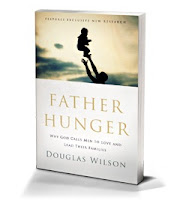 Fathers, may I have your attention?

Now that I have your attention, you need to know that there is a book you need to get. The book is called Father Hunger, and it's author is Douglas Wilson. Get this book in paperback, e-book, or Mp3 audiobook, but make sure you get it somehow. Then after you get it, read it multiple times. Take it with you wherever you go for the first few weeks and read a portion of it at every break until it's text is tattooed in your mind. "What's the urgency?," you might be asking. Well, if you're a father, and you have not already read this book, you wouldn't be asking that question. And so, just to tease you a bit, read and re-read an excerpt from that book which I have provided below. Afterward, get this book. The excerpt below is under the heading, "Loving the Standard":


If you cannot get the kids to love the standard, then lower the standard. I am not talking about God's commandments (His standards), which we have no authority to lower, but rather addressing the questions that surround what might be called house rules. Lower the standard to the point where everyone in the family can pitch in together. This is not actually lowering the standards, but rather raising the parental standard, which is the real reason we don't like it. Fathers must embrace the task of communicating, in a contagious way, love for the standard.
Some parents might protest that this is impossible. But what does this example teach the young people in the home?  It teaches them that nobody around here has to do "impossible" things, and since the requirement to make your bed, or to comb your hair, or to stop texting so much, are all clearly impossible, then they don't have to be done. If you want your children to be obedient, then show them how. Giving up when it seems "impossible" is not showing them how it is done. Apart from a context of love and loyalty, fatherly discipline is just clobbering a kid. And since clobbering a kid is not what God said to do, the child is learning the fundamental lesson that, in this house, we don't have to do what God says to do. Instead, we learn to be sneaky enough to not get clobbered.
Each member of the family is supposed to understand that the whole family is a unit. All the members are on the same team. If a family has drifted into an adversarial set of roles, then the parents have to do something to stop the game or maybe change the rules. They have to do something that works. Let us suppose the whole family is flunking high school calculus. Wouldn't it be far better to all go back to sixth grade and pass that grade together? We have to remember that the standard set in the above passages from Proverbs1 is not an impossible standard. That was not written for angels in heaven. It was written for us. These things are set before us now. There will be more on loving the standard in a subsequent chapter.
The hardest thing to maintain in this unbalanced world is balance. We react, we pull away, we lurch, and we tumble. We do this in many ways. And, having heard the exhortation that we should teach our children to love the standard, but if they don't then we should lower the standard, what temptation will confront us? The temptation will be to think that laziness and apathy are grace, and that defensiveness when confronted is zeal for the law of God. But loving God with all your mind, soul, heart, and strength is a love with balance.

Children, obey your parents in the Lord, for this is right. "Honor your father and mother" (this is the first commandment with a promise), "that it may go well with you and that you may live long in the land." Fathers, do no provoke your children to anger, but bring them up in the discipline and instruction of the Lord. (Eph. 6:1-4)

Here are some of the basics of Christian living within the family. We begin with the duty of obedience. When children are young and living at home, honor entails obedience, necessarily. When children are grown and out on their own, the duty of honor remains, but it is rendered differently (Mark 7:10-13). This is obedience rendered by children in the Lord. The word for obedience could be rendered literally as "listen under" -- or, as we might put it, "listen up." This attentiveness to what parents say is described here by Paul as a form of honor, and he goes on to describe how much of a blessing it will be to the children who are taught by their parents how to behave in this way. This commandment, to honor parents, is the first commandment with a promise. The promise from God Himself is that things will go well for you throughout your long life on the earth (Eph. 6:3). And then fathers are presented with an alternative -- one thing is prohibited and another is enjoined. Fathers are told not to exasperate their children to the point of wrath or anger, and instead are told to bring them up in the nurture and admonition of the Lord. Note that they are not told to provoke their children to anger with the nurture and admonition of the Lord -- one excludes the other.
One of the things fathers can stop doing (that provokes children) is to stop experimenting on them. In construction work, one of the good things about a concrete pour is that, no matter what, a couple hours later, you're all done. This is also one of the really bad things about it. You don't want to start out with a long foundation wall and wind up with a patio. Kids are a concrete pour. The time they will spend in your home goes by a lot faster than you initially thought it would. Fathers are tasked with the responsibility of bringing them up in the Lord, which means that fathers are tasked with the responsibility of working in harmony with the nature of the child. It is, of course, debated what that nature is actually like, and so how are parents to deal with this?
Too many Christian parents are like that old joke about the Harvard man. "You can always tell a Harvard man, but you can't tell him much." Because we have successfully established the principle that parents have true authority in the home, many foolish parents have concluded that this means that anything they may happen to think about child rearing, or education, or nutrition, or training, or courtship standards, is therefore automatically blessed by God. But fathers are told not to provoke their children, because in this fallen world, this is a very easy thing to do. This is a very easy thing for Christian fathers to do. If it had not been an easy temptation for Ephesian fathers, Paul could have saved his advice for the occasional dad who really needed it. Paul does not make the mistake of thinking that authority makes folly impossible -- he cautions against authoritative folly.
The hallmark of whether or not a father is experimenting on his kids, as opposed to bringing them up in obedience, is how open he is to the idea of someone else actually measuring what he is doing. How open is he to true accountability?  "Not that we dare to classify or compare ourselves with some of those who are commending themselves. But when they measure themselves by one another and compare themselves with one another, they are without understanding" (2 Cor. 10:12). Note that phrase "without understanding." How can you tell if parents have undertaken their solemn responsibilities as parents with a demeanor of humble confidence? "Let a righteous man strike me -- it is a kindness; let him rebuke me -- it is oil for my head; let my head not refuse it" (Ps. 141:5). The question can be easily answered. How open is he to outside accountability? If he wants his children to have high levels of accountability, while he himself has virtually none, then this is the way to a bad family disaster.
The Christian faith is a road, sure enough. But it is also a way. This means that how we walk is as important as where we walk.  If someone has questions about what a man is doing, it does not answer the concern to point at the road. It does not answer to bring out various books and websites that argue for this particular kind of asphalt. That's as may be, but there is something else going on. How does a father conjugate the verb firm? Does he say, I am firm, you are stubborn, he is pig-headed? If he does this easily, then he has wandered from the way, whatever road he is on.2