Worshipping and Reigning: The Telos of Human

Bishop N.T. Wright comments further about the the apostle John's vision in the book of Revelation and how one's understanding of that vision affects Christian character in the present time, prior to Christ's return, and also the goal of what he calls "genuine humanity".  He writes: 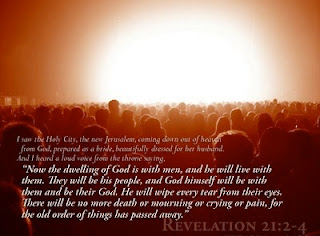 The early Christians held out a breathtaking, radical vision of the ultimate goal of all things: the new heavens and new earth, the renewal of all things, the new Jerusalem "coming down from heaven to earth" (Revelation 21:2), a world flooded with the joy and justice of the creator God.

... The Bible opened, as we saw, with God assigning a particular vocation to human beings: that they should look after God's creation and make it fruitful and abundant. The Bible closes with a scene in which this has at last come about, only far more so. Forget the vague and wishy-washy piety which speaks of "heaven" simply as a place of rest and adoration. ...In the final chapter of the Bible, we find two things highlighted as the central activities of human beings within God's new creation...

...Worshipping and reigning: those are the twin vocations of the new people in the new city.

... There can be no mistake. The book of Revelation, so often dismissed as merely dark, strange, and violent, holds out a vision not only of all creation renewed and rejoicing, but of human beings within it able at last to sum up the praise which all creation offers to its maker, and to exercise that sovereignty, that dominion, that wise stewardship over the world which God always intended for his image-bearing creatures. They will be priests and rulers, summing up the praises of all creation and exercising authority on behalf of God and the Lamb.

... [T]he "new Jerusalem" in chapters 21 and 22 is designed, it seems, to be like the Temple. There is no specific Temple in this new city because the city itself is a Temple, or rather is the true Temple, the reality toward which the Jerusalem Temple had been pointing all along. Its measurements and adornments speak of this, as do the rules for its holiness (21:8, 11-21, 27; 22:3, 15). This, John is saying, will at last be the reality of which the Garden of Eden itself, and then the ancient Jerusalem Temple, were foretastes. This is the place where the living God dwells, the place from which his healing river will flow out to refresh and cleanse the whole world (22:1-2). Kings and priests, set now in a throne room, now in a Temple. That is the goal, the telos, of Human.1