The Beatitudes: Rules or Virtues?

In the book After You Believe: Why Christian Character Matters, N.T. Wright comments about Jesus' promises of "blessings" upon obedient servants of God. Wright observes: 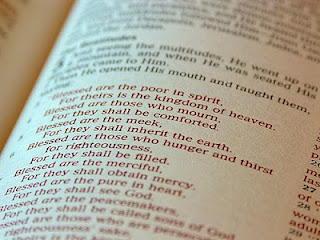 Jesus is not meaning either "If you can manage to behave in this way, you will be rewarded" (a kind of legalist solution) or "now that you've believed in me and my kingdom project, this is how you must behave" (the sort of thing some post-Reformation theology might insist on) -- though the latter is closer to the truth, albeit not in the sense usually imagined. To shuttle between those two options is to remain impaled on the horns of a philosophical dilemma and its theological ramifications rather than coming round the corner to see things from Jesus's very first-century Jewish point of view.

What Jesus is saying, rather, is, "Now that I'm here, God's new world is coming to birth; and, once you realize that, you'll see that these are the habits of heart which anticipate that new world here and now." These qualities -- purity of heart, mercy, and so on -- are not, so to speak, "things you have to do" to earn a "reward," a "payment." Nor are they merely the "rules of conduct" laid down for new converts to follow -- rules that some today might perceive as somewhat arbitrary. They are, in themselves, the signs of life, the language of life, the life of new creation, the life of new covenant, the life which Jesus came to bring.

...[T]he Beatitudes could be mistaken for a set of rules. They aren't, however. They are much more like virtues, and that's how they work: grasp the end, the goal, the telos, the future, and go to work on anticipating it here and now. That doesn't mean (as I keep stressing) that there are no such things as rules; as we shall see, the Beatitudes are both guidelines for those who are learning virtue and a checklist to which virtuous Christians can refer from time to time. But to read the Beatitudes as rules is to miss the point.

...God wants you to be, as we might put it, humans rather than puppets. You will have to think about it, to struggle with it, to pray for grace and strength; but it is at least now within reach. ...The authenticity that really matters is living in accordance with the genuine human being God is calling you to become. What the ancient Law really wanted -- genuine human life, reflecting God's glory in the world -- will start to appear.1